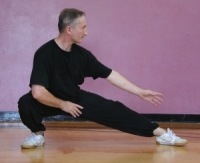 Michael W. Acton is Founder and Senior Instructor of the Wu Shi Taiji Quan and Qi Gong Association UK. He has been training for over 30 years and is the sole representative of Dr Li Li-Qun, a fourth generation Wu Style Taiji Quan master and a leading Qi Gong master. Here, he answers some questions about his new book Eternal Spring: Taijiquan, Qi Gong, and the Cultivation of Health, Happiness and Longevity.

When did you first become interested in Taijiquan and Qi Gong?

When I was young I was fascinated by Indian Yoga and so I began to practice meditation when I was eleven. I was without a teacher then and pretty much in the dark. There were no yoga teachers anywhere near my home town in the early sixties and I certainly had not heard of Taiji quan or Qi Gong then. I have always been drawn to yogic practices.

I was also interested in all things Chinese and especially Chinese painting and its Daoist roots. I was already a good candidate for Qi Gong and Taiji though still knew little to nothing about it. My first introduction to Qi Gong was a small book of Daoist Yogic practies and I also found a book by the American dancer Sophia Delza who had studiied the Big Slow Form of Wu Style Taiji Quan with Ma Yueh Liang when she had lived in Shanghai. I think that was in the 1940’s. The illustrations in the book were hopeless to learn anything from and although I got the first few moves I got no further. It was not until many years later, after university, that I found a teacher of Taiji Quan.

I am not sure when I first saw Taiji even. There were only a few teachers in London at the time. I was however lucky enough to meet a young Chinese Malaysian who was starting a small group. When I saw him practice the form I was deeply impressed with the beauty and natural elegance and sense of integrated power. I started to learn the Wu Style form, Tui Shou and some Qi Gong from him. As fate would have it, it was the same form which Sophia Delza had studied and whose book I had struggled with back in my school days.

It was many years later (1992) in Shanghai that I would eventually find my true teacher; 16 or so years after my first Wu style teacher had returned to Malasia. During that time I had kept up my practice though not always systematically and even learned other forms and worked with and met other teachers. Only one however really impressed me. He was an old Chinese artist from Shanghai who had left China for London. His Traditional Yang Style, Hsing Yi and Ba Gua were quite remarkable and inspirational. When he stopped teaching and moved to Australia I realised that I would have to go to China to get what I wanted.

What do you think is the particular relevance of Taijiquan and Qi Gong for a Western audience?

Their relevance to the Western audience must surely be the remarkable ability of Taiji and Qi Gong to bring about good health, self healing and restore a sense of vitality and mental clarity. It also bring us back into contact with our true nature and the natural environment and the conditions of life.

Western Science will no doubt eventually explain much of what Qi Gong is and what it can do. But we don’t have to wait for explanations, we can cultivate the experience now. We can rediscover our innate ability to restore and heal ourselves and rest in mental dimensions that will always remain beyond science. In a world where we are sensorially overloaded and so many of our experiences are tailored, limiting and manipulative we can discover an internal freedom and strength and a sense of real liberation and empowerment and perhaps even spirituality. The methods for this were cultivated thousands of years ago. It has taken a long time for the West to notice them.

What would be your advice for anyone in taking up either Taijiquan and Qi Gong?

Find a good teacher and a good and mutually supportive group, and don’t get caught up in the politics of who does what and which form is best. Always avoid conceit and arrogance in a teacher and never submit anything for the promise of ‘secret knowledge’. Just do it with no aim other than giving yourself up to the experience. It may take a long time to feel you are getting somewhere so persevere and do not look at the end goal. The key to the achievement of Taiji and Qi Gong are firstly perseverance, then slowness, precision, lightness and correct awareness. I rate correct awareness very highly since without it form often remains only beautiful movement and the deeper levels of achievement will remain a mystery. There are often long periods when you do not seem to achieve much but progress often occurs when you least expect it. Suddenly you may discover that your level of practice is deepening and your ability to maintain a steady and undistracted awareness is maturing. Always return to the experience; perseverance is more important than talent and never give up. The extraordinary lies hidden within the ordinary.

What or who most inspires you?

I think it must be the people in China who rise early and go to the park to practice their Taiji or Qi Gong. In a way they have transcended the discipline of practice because for them it is as ordinary as eating rice; just an everyday activity. One feels good, the other tastes good and both are important for a long and healthy life. My teacher Dr Li Li Qun is one of them and he has been practicing since childhood. He is now in his 80’s and still cycles to the park each morning. Such an inspiration. His belief that Taiji and Qi Gong is for everybody is also inspiring. Finally I should say that I am inspired also by the humility of such people and their deep connection to an ancient and remarkable tradition and belief.

What do you enjoy doing in your spare time (other than Taijiquan and Qi Gong)?

I make no distinction between spare time and Taiji and especially Qi Gong time which I try to practice continuously from morning to night. I am also an artist and so I am often thinking about paintings. I spend a lot of time with my wife and daughter and the rest goes on working to make a living. My first Taiji teacher said that making money must come first, then the family (since without money the family would not be secure) and finally the practice of Taiji Quan. It is a good rule of thumb in our modern world, though I’m afraid I have done it the wrong way around.