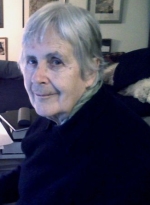 Phoebe Caldwell has worked for over 35 years as a practitioner with people whose severe learning disabilities are linked with behavioural distress. She was a Rowntree Research Fellow for four years, trains practitioners, parents and carers in her successful approach to Intensive Interaction and is employed by the NHS Social Services and Community and Education Services to work with difficult-to-provide-for individuals. In 2009 she was awarded the Times/Sternberg Award for pioneering autism treatment.

Based on ‘imitation, Intensive Interaction uses body language to communicate with non-verbal (and semi-verbal) people on the autistic spectrum. In order to protect themselves from sensory overload, children on the spectrum retreat into repetitive behaviours, focusing on something that does makes sense. If they cannot find this coherence, they may be overtaken by disturbance involving confusion, pain and heat. The child may lash out or self injure.

Intensive Interaction asks what a child is doing? It looks at all their behaviour – and any activities that focus on a particular aspect of the world outside themselves. The brain may fixate on breathing rhythm, or activities like tearing paper, or themes such as Thomas the Tank Engine, specific computer programmes – or certain tunes or movements. Such behaviours help the child to cut down on the external stimuli, focusing instead on a conversation between their brain and the feedback they are getting from the stimulus. Far from trying to stop such behaviours, we are going to use them to gain access to our child partner’s attention, in the same way as we use a smart card.

Contrary to what is normally understood, children on the autistic spectrum do recognise when we use their own body language to communicate, provided we respond using the repertoire of their personal behaviours. We are shifting their attention from solitary self-stimulation to shared activity, remembering that what is important is not just what they do – but how they do it, since this tells us how they feel. If we just mimic, we catch the child’s attention but after a while there is a tendency to loose interest. Rather than ‘mimicking, we ‘answer’. Using elements of their repertoire we respond in ways that echo their rhythms but also put them in a slightly different way, like jazz where you have a theme and variations.

Our aim is to interact with the child’s brain in a way that reduces their stress level. Eye contact increases, they move closer and are more socially responsive. There are also some cognitive improvements, such as the ability to generalise (within the limits of their disability), refer back and particularly, to be able to copy hand movements. Intensive Interaction is not a cure for autism but allows us to engage with children. It brings calm and pleasure to their lives. Aloneness becomes shared interest.

Phoebe Caldwell is the author of three JKP titles including Using Intensive Interaction and Sensory Integration: A Handbook for Those who Support People with Severe Autistic Spectrum Disorder®. See the below link for more details.