Ann Andrews worked as a television and theatre producer, researcher, teacher and crisis counsellor. She was diagnosed with Parkinson’s in her fifties, and went on to write the informative, practical and inspiring guide to living well with Parkinson’s; Positively Parkinson’s.  We caught up with Ann to find out what she’s been up to since the publication of her book, how she’s managing her Parkinson’s symptoms now, and what she’s looking forward to in the future.

Since the publishing of Positively Parkinson’s I have travelled through most of the North Island and some of the South Island of  New Zealand talking to groups of people with Parkinson’s. In doing so I have met people from all over the World and everyone has told me how important the book has been for them. It seems to have achieved what I most wanted it to do:  help us all have a better understanding of Parkinson’s and to become a do-it-yourself guide to helping ourselves stay well.

I went to New York last year and am going back again this Christmas. We have a daughter there and a delightful about-to-be-two-years old grandson. While I was there I tried to promote the book which is published in the United States with the title I have Parkinson’s. What should I do? I found not many people had heard of it. However, I got to know a great group of Parkinsonian’s, members of a Brooklyn group.

A couple of years earlier a NY dance company had visited Auckland and offered dance lessons for people with Parkinson’s. They were called the Mark Morris Dance Company. One of the dancers John Heginbotham features in Positively Parkinson’s (page 126). While in NY I got in touch with John and another dancer David Leventhal, and was thrilled to be invited to a dance lesson at the home of Mark Morris Dance.

John was about to leave to join the same dance company in San Francisco and I was able to be there for his last lesson. In doing so I met the Brooklyn group. I was fortunate in being able to attend about five dance lessons with David Leventhal and student members of the dance company.

I describe the New Zealand lesson in my book (page 127) but being there at the home of the dance company was very special. As well as dance lessons I went to some movement lessons with Pamela Quinn, a dancer who has early onset Parkinson’s. She is so fit I found it difficult to keep up with her in class, though most of the other members seemed to be able to.

You can see her and some of her exercises on YouTube.  If you would like to know more about the dance lessons you could get in touch with Maria Portman-Kelly who manages the Parkinson’s classes at the Mark Morris Dance School.

What these classes also achieve is to provide a meeting place for people with Parkinson’s. Attending class once or twice a week at Mark Morris or the Juliana School at the Lincoln Centre means New Yorkers can meet for coffee and a chat as well as exercise.

This year I have written a bright picture book for children and grandchildren of someone who has Parkinson’s; a child’s guide. Called Grandma’s Brain, it is illustrated with drawings of me and my grandsons, my brain, a young space traveller and space pirates.  My son, a magazine publisher, is publishing the book which will be available sometime early in 2015. By then I hope to also have a website. The story is meant for children aged between 5 and 12 to read themselves or be read to. It is light, humorous, entertaining, yet informative and is colourfully illustrated. Look out for it!

In the last year I have had a few falls and my balance is not what it used to be. It has been both an eye-opener and a wake-up call.  I now use a hiking stick when out and about. I find friends and family very quick to offer an arm, which is nice and I take it without demur.

More of my friends have now had the deep brain stimulation operation, one as young as 43. They seem a lot better and have been able to reduce their medicine intake.  There is also a very different research programme here in Auckland which utilises the same initial brain operation, but for quite a different reason. I’ll try and explain it: To begin with… On an island in the Auckland islands group (far south of NZ into Antarctic waters) some pigs were left about two hundred years ago. Because of their isolation they have developed into a healthy virus free herd. Some of these pigs now live in a separate isolated location in New Zealand.

Pig tissue has been used successfully in medical treatments for many years, but this research is about pig cells. The programme entails removing some choroid plexus cells from deep within the pig’s brain. The choroid plexus in all brains releases a growth factor that repairs cells and makes nerves grow. Obviously we can’t transplant human choroid factor cells but we can use those from pigs, especially virus free pigs.

To inhibit the immune system from rejecting the pig cells they are placed in tiny capsules rather like Goretex which shield the cells while letting nutrients in and growth factors out. The treatment involves surgically placing the cells into the brain to encourage the nerves that have died back to regrow. A group of six people with Parkinson’s are taking part in this research. They will be assessed carefully and if there is no improvement after six months they will be offered the alternative deep brain stimulation.

I have tried to think of anything I particularly wanted to add to Positively Parkinson’s. There have been things that occurred to me, but which I can’t remember at this moment. I’m still experimenting. I have been on a course of hormone 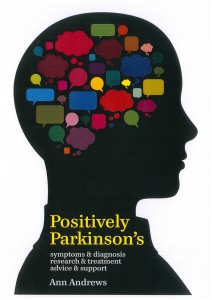 replacement which is supposed to help me remember things. I’m not sure it does, but six months on my memory does seem better. I’m sure one of the most helpful things you can do is keep working on yourself. Hold a constant dialogue with your brain. Tell it to take bigger steps, make a bigger voice and do the exercise you’ve been putting off.

One group I don’t mention in the book is the nurses working in homes for the elderly. I have talked to a number of them and found they had little understanding of Parkinson’s in the people they were caring for. They had no idea that it could be the cause of a mask-like face, the inability to smile and the lack of a voice; with the result that many of them misjudged their patients completely.  To me this is dreadful.  I have tried to impress on them that this kind of ignorance would be what people with Parkinson’s fear most.

Not a good ending. On a positive note I’ve just completed another Lee Silverman Voice Training Programme and found I had slipped back by not practising at home enough. I’ve tried LSVT Big from a useful YouTube programme called LSVT Big home exercise video. It’s expensive to learn the complete programme here so I add some of the video exercises to the same ones I have in the book.  I have added weights to try and keep my muscle tone and then, of course, I have my new exercycle which I can ride inside when the weather is not conducive for walking.

So, think big, think positive and keep doing everything you can. Your brain will find new pathways.

Find out more about Ann’s book, read reviews or order your copy here