Dr Monika Renz shares her perspective on optimal palliative care and talks to us about her most recently published title, Hope and Grace. 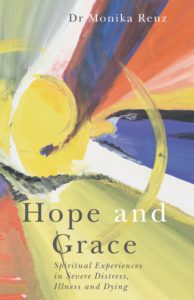 Could you tell us a bit about your background? Where you grew up and whether there were any early influences in your decision to enter the palliative care field?

I grew up in Zurich. My father was a business leader; my mother was a psychologist. Since childhood, I have been interested in the human condition, particularly health and spirituality. I was first influenced by my father’s focus on efficiency, and as a psychotherapist, I began looking for efficient therapy methods.

A second early influence was music: My mother told me that I had begun singing before speaking! Since I was 5 years old, my hobby has been piano improvisation. Without reading notes, I played whatever I heard and as a child discovered the healing effect of music. When I was a teenager, research on intrauterine hearing had just come to the fore. I was fascinated and became interested
in music therapy.

At the University of Zurich, I studied educational psychology, psychopathology, and ethnomusicology. The deepest influences on my therapeutic work with dying patients came from several accidents and longer periods of personal illness. As a patient, I experienced what I later called a transformation of perception. I discovered two different states of being: In one, I suffered great pain, and in the other state, I had none. In the one state, I was present and in control, and in the other painless state, I was somehow far away from time and space but very clear. I looked deeper into this phenomenon when writing my doctoral dissertation on primordial trust and primordial fear under Professor Heinz Stefan Herzka. Years later, I studied theology to better understand patients’ spiritual distress. My theologic dissertation dealt with redemption from early behavioural imprinting.

How did you become involved in palliative care at Cantonal Hospital?

Before I entered the field of psycho-oncology, I had a private practice and worked as a music therapist with children and adults. I felt that the long-term therapies were unsatisfying and inefficient. I closed my practice and applied for a position in the Department of Oncology of the Cantonal Hospital of St. Gallen, feeling that my keen interest in crisis intervention would be useful here. At that time (1998), the hospital did not offer psycho-oncology therapy yet, just music therapy. I was entrusted with building the Psycho-oncology Department; I developed a multidimensional therapy approach for cancer inpatients and outpatients.

Over the years, my therapeutic approach has been so successful that there has been a fourfold increase in demand for this therapy at our hospital. For end-of-life care and support of dying patients, I have developed an educational program together with the Head of Palliative Medicine, Dr. Daniel Bueche. As a result, I supervise members of the palliative care nursing team to support dying patients psychologically and spiritually.

What can readers expect from Hope and Grace?

The book explores how care providers and relatives can support patients in their suffering and how they can recognize patients’ spiritual experiences, such as seeing angels or feelings of otherness and presence.

When people find themselves in situations of suffering, illness, and dying, and when conventional coping strategies can be pushed to their limits, the book can be a source of hope because individuals often have spiritual experiences of grace and encounters with the transcendent or the divine. This often happens when patients are in a state beyond their everyday consciousness.

The book also entails a new approach to spiritual care which opens a space of hope wherein grace may happen even amid pain, suffering, illness and dying.

I would like to point out the importance of a particular “hearing sensitivity” in the dying process. Even a small noise can be overwhelmingly loud.

Next, I would like to bring into the clinical discussion a new approach to spiritual care. Spirituality includes more than just giving a response to a patient’s spiritual attitude. Spiritual needs as well as patients’ consciousness and communication are changing during the dying process. Spirituality in severe illness and dying, as perhaps in near-death experiences, has to do with an altered connectedness and consciousness. Spiritual experiences are powerfully independent from religious attitudes.

Last but not least, I think that by understanding the workings of the liminal sphere (e.g. primordial fear, struggle and their transition into peace), we could reduce pain management and sedation therapy.

Thanks Monika, for talking to us!