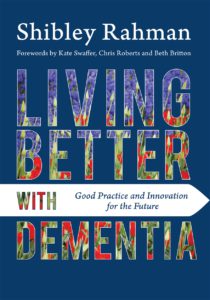 Identifying current global policy challenges for living well with dementia, this book tackles controversial topics at the forefront of public and political debate, and highlights pockets of innovation and good practice from around the world to inform practical solutions for living well with dementia in the future. We talked to Dr Rahman about the book and his thoughts on the current process of dementia diagnosis.

What motivated you to write Living Better with Dementia?

The name of the only national dementia strategy for England so far was ‘Living well with dementia’. This name is problematic, as it potentially sets people up to fail. What if a person has a bad day? We’re all entitled to have a bad day.

The actual strategy expired in 2014, exactly five years after it was launched by a previous government in 2009. I wanted to keep with the ethos that it is possible to aspire to live as well as possible with dementia. The prism of long term conditions suits people with dementia much better than the approach which relies solely on drug treatments.

The title of the book, Living Better with Dementia, is in fact from Chris Roberts, living with mixed dementia of the Alzheimer type and vascular type. I am honoured that Chris wrote one of the forewords. Kate Swaffer, Chair of Dementia Alliance International, wrote the main foreword.

There has to be an alignment of rhetoric and reality. That’s why I respect the work of Beth Britton who wrote the final foreword. Beth has an intimate lived experience of dementia from family, and professional experience in how this impacts on actual care. The topics of my book give a realistic state-of-the-art exploration of key themes in wellbeing in dementia, not entrenched in dogma, but which promote awareness and education.

What advice could you give to those who are caring for someone with dementia?

Above all, I think it’s crucial to see the individual person – his or her past as well as current beliefs, concerns and expectations – beyond the label of a medical diagnosis of dementia. The diagnosis itself can have a marked effect on identity, and the approach should be one of trying to promote as fulfilling a life as possible. This is called ‘enablement’. I don’t think dementia care is solely a healthcare system issue, though there are some caveats. Firstly, people with dementia do also have other medical health issues, both physical and mental, and it’s important they’re identified and managed regardless of care setting (e.g. home, care home, hospital or hospice). Carers have complementary needs too, including ‘coping strategies’, which need addressing, and Admiral nurses are especially relevant here.

Secondly, the entire ecosystem should be revved up to providing an inclusive and accessible environment for people with dementia and their significant others, including close friends and family. Such dementia inclusive communities, with national programmes such as Dementia Friends, are an important first step.

Finally, there needs to be an acceptance in care that dementia is a terminal illness, and this has consequences for the organisation and for care services, such that people with dementia have equitable access to palliative services too.

What changes would you like to see to the current process of dementia diagnosis?

We are, overall, in a better place compared to where we were in England regarding dementia diagnosis. The issue back in 2009 was a massive diagnosis gap, which has successfully been closed in subsequent years through the collaborative efforts of greater societal awareness and substantial proactive work from the medical profession. Whilst the timing of the diagnosis has to be sensitive, and also given in a timely way and appropriately person-centred, there’s no doubt there is little benefit for people languishing without diagnosis. The lack of better pharmacological treatments for the 100+ different types of dementia should not promote an attitude of living with rather than dying from dementia.

However, I’d say the two particular under-addressed issues in the diagnosis policy is making sure that we have better recognition of people with dementia which comes on before the age of 65. This is defined as ‘young onset dementia’, and tends to be a set of conditions which quite often do not present initially with memory problems. We therefore need to up-skill an already stressed workforce, including primary care and GPs.

You’re an active member of the dementia community. What do you have planned for the coming months?

I am currently writing my second book on the ‘hot’ topic of integrated care of dementia in England, including care at home, hospices and hospitals. This is an issue often referred to as ‘right time, right care, right place’, and is a very relevant issue given where NHS England currently finds itself. The book will draw on best practice from other jurisdictions, however.

Any final thoughts for our readers?

Do not view dementia as an issue irrelevant to you. In fact, most people know someone living with dementia, or at least someone who knows someone with dementia. Take part in activities such as Dementia Friends beyond Dementia Awareness Week, but also acknowledge the needs of carers, supported through organisations such as tide (together in dementia everyday). Above all, learn as much as you can about dementia, from anyone, from anywhere. Some of it will be rubbish, but you’ll soon get a feel for what reliable sources of information are. I believe, essentially, a massive step forward for dementia is, as somebody else might put it, “education, education, education”.

You can find out more information or buy the book, Living Better with Dementia, here.