Formerly a pastor for the little parish of Djursland in Denmark, Isle Sand is now a psychotherapist and, more particularly, an author. Having written and published Highly Sensitive People in an Insensitive World, she has put into words the difficulties and blessings that come with being highly sensitive.

As a pastor, Ilse was good at delivering sermons – she could write and speak in a language everyone understood. She was also good with funerals – she had empathy for the next-of-kin and she had deep insight into bereavement. What she found difficult was chatty churchgoers and being forced into small talk. Basically, it is hard to be a preacher in a little village parish where it is expected that the pastor will participate in its social life. At that time, Ilse believed she was just introverted. Now, she knows that she is highly sensitive.

She explains that one in five people is highly sensitive. This has become a popular trait, and since many people in Denmark – especially women – experience high levels of stress and pressure, the trait may resonate with many.

“Before, I saw myself as introverted. When I was a pastor, I had a hard time being entertaining, and that was expected of a country cleric. If I’m going to say something, it has to be deeply meaningful. Otherwise, I can’t deal with it,” says Ilse. Eventually, when she was in her 40s, she decided to quit her job, and moved to a small apartment in Randers, where she could make do on assistance. It was then that she began to training in psychotherapy and teaching psychology.

Ilse discovered that there weren’t many books about highly sensitive people. She had found that there was an interest in introversion and many were happy to have it put into words, however, the case was not quite the same for being highly sensitive, and this sent her to the keyboard. Four months later, Ilse had finished writing her book, and she had established her own publishing house: Ammentorp. Since then, Ilse’s book on being highly sensitive has been translated and published in 16 languages.

“Being highly sensitive is a gift and a limitation for me. I get good ideas but cannot always carry them out. I have a need for what I’m doing to be meaningful. I can be intensely present for shorter periods of time,” says Ilse. However, she also said before the interview that it could not last more than an hour – because she had learned to take care of herself. However, being an HSP involves some level of sacrifice. She loves concerts but always goes alone – because, if the music is too loud or jarring, she leaves and does not want to be dependent on others. She never watches horror movies but loves films she has seen before and knows are good. She likes to go to parties but does not like to stay too long.

Ilse believes that many people will identify with features as belonging to the highly sensitive, as the highly sensitive are positive, creative, emotional, and very empathetic. And this, of course, is something many people like to identify with, but they are also easy to overstimulate. Ilse suggests, “It’s a good idea to make a ‘to do’ list. Maybe you could do routine chores, or running, knitting, etc. I like to cook, especially in large portions that can be frozen down. I can do this for a long time because I find it soothing to use my hands.”

This article originally appeared in Jyllandsposten, (Denmark, 15th May 2016) and was written by journalist Mette Egelund Olsen.

Read an exclusive extract from the book here: The Characteristics of Being Highly Sensitive 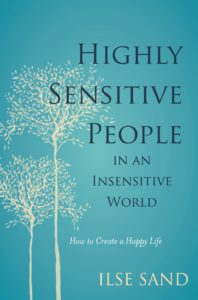