It has become increasingly evident that black children and young people are facing victimisation in a context where their identities and experiences are marginalised and devalued. In this blog post authors and academics Claudia Bernard and Perlita Harris call attention to the lived experiences of black children in the child protection arena.

Over the last four decades, some of the most high-profile child death reviews in Britain have concerned black children, such as Jasmine Beckford, Tyra Henry, Kimberlie Carlisle, Sukina Hammond, Victoria Climbié, and Khyra Ishaq, to name but a few.  More recently, attention has been drawn to the particular issues confronting black British adolescent girls who are sexually exploited in the context of gang-associated violence.  What is highlighted is the everyday victimisation that black children and young people have to contend with in a context where their identities and experiences are marginalised and devalued. As the population of black children has become much more culturally diverse in the UK, safeguarding and promoting their welfare has thus become more complex and challenging.  Perhaps an important point to stress here is that there are black children of varying ethnicities that have recently migrated from different countries in Africa, along with fourth and fifth generation British-born children of Caribbean and African descent (many of whom are of mixed heritage), as well as newly arrived unaccompanied asylum-seeking minors.

Precisely because black children are so culturally and ethnically diverse, the child protection issues arising for them are multifaceted and perplexing. Sexual, emotional and physical abuse within the family environment, abuse related to belief in witchcraft, female genital mutilation, forced marriage, and sexual exploitation in gang-associated circumstances are just some of the examples of different kinds of abuse suffered by black children and young people in Britain.  Such abuse experiences are made even more difficult because the black children also suffer racism and discrimination.  Yet, at the same time, black children’s maltreatment experiences are significantly understated in the literature, as few studies encompass the heterogeneity of black children’s experiences of harm in the family environment. It therefore is apparent to us that, when black children’s needs are considered in child welfare debates, they are either lumped together under the umbrella term ‘BME’ (denoting Black and minority ethnic), ‘BAME’ (denoting Black, Asian and minority ethnic), or typically, there is a strong tendency to treat them as if they are a homogeneous group.

Safeguarding Black Children thus calls attention to the lived experiences of black children in the child protection arena. Our interest in doing this book was motivated by a deep concern to have more literature that puts black children at centre stage to capture the intricacies of their experiences of child abuse and neglect. One of the key functions of the book was to bring together key scholars to address the nuances of child abuse and neglect for culturally diverse groups of black children in Britain.   The authors draw on the research of others as well as their own research to probe the myriad issues arising for black children in the context of maltreatment.  A particular area that we were keen to shine some light on is how young black people give voice to experiences of familial abuse and neglect in a societal context where their identities are devalued and stigmatised. Essentially, we wanted to bring home the point that black children’s perspectives require specific attention to better understand the unique and complex nature of their social realities. One theme that primarily concerned us is the ways in which gender, faith, cultural expectations and race collide to heighten black children’s risks to specific kinds of maltreatment because of their cultural backgrounds. We therefore wanted to emphasise these issues by paying particular attention to the heterogeneity of black children’s experiences in Britain. Of particular concern is that for black children, maltreatment takes place in a societal context that stigmatises their identities, marginalises their experiences, and fosters a racialised deficit perspective of their families. These factors have a compounding effect on if, and how, they disclose their victimisation, their help-seeking behaviour, as well as their engagement with helping professionals.

It is as a result of a growing recognition of the emerging child protection concerns for black children that there is a necessity for work that holds this group of children as a central focus. Additionally, it should be acknowledged that for children who are socially disadvantaged, racial microaggressions are a critical factor in framing a variety adverse of childhood experiences.  Hence, it is important for us to engage with the specific issues relating to race, gender, and class inequalities to advance a deeper and more nuanced understanding of the social conditions that create and affect black children’s experiences in the child welfare system in the UK. There is therefore an urgent need for new knowledge that is grounded in the lived realities and experiences of black children who are affected by abuse and neglect.

Claudia Bernard is Professor of Social Work and Head of Postgraduate Research in the Department of Social, Therapeutic and Community Studies at Goldsmiths, University of London.

Perlita Harris is Senior Lecturer in Social Work and Convenor of the BA in Social Work in the Department of Social, Therapeutic and Community Studies at Goldsmiths, University of London. 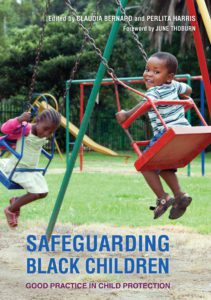