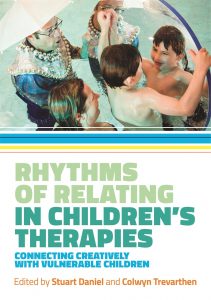 “A long time ago, in a galaxy far, far away (it was the nineties in Edinburgh) I enjoyed getting painted red and drumming like wild-fire with a group of people dedicated to festival and having serious amounts of fun. The festival nights we drummed were a culmination of many hours spent in connection through shared rhythm. There’s a collective space we would enter, a space known to any rhythm musician, where time goes strange, the group hums with a new electricity and unity glows.”

Sometime last year, as a play therapist, I was working with an eleven year-old boy. We had been hanging out for four sessions. The boy had a lot to be angry about and, up until this point our connection had been defined by me (almost as a by-stander) attempting to help him feel safe and contained as he expressed this angry momentum. I remember feeling disconnected. Not obviously, but somewhere in a quiet place inside where the chance for melancholic sadness has a chance to grow. In this particular session, session five, the boy had given our punch-bag a name and was beating it with hands and then foam swords. I stuck with him, joining in, empathising with body, gesture, a few words. After a while the energy of his angry impetus faded a little and he more casually struck with the swords. I had some insider information here! I knew the boy was learning, and loved, to drum. I started playing an off-beat to his strikes, and then switched things around a little. He matched perfectly and, after a few iterations, developed too. We played in-sync like this for a while until the energy of the room changed colour. The boy became quiet, lay down on the fallen punch-bag, and moved on to a series of mother-baby play scenes of a fresh, gentle, powerful quality completely different from before. I remember being delighted, moved, and consciously thinking, “has he been reading our book?”.

In 2010, Stephen Malloch and Colwyn Trevarthen published Communicative Musicality – an awesome culmination of many people’s visionary research into the essentially musical nature of human communication. From birth, infants and close carers inspire and regulate each other in, and through patterns of connection. These patterns are musical. They happen within certain rhythmic parameters (pulse), flow through certain social, energetic contours (contours of quality) and have their own micro, emotional stories (narrative). It is this musical togetherness that enables co-regulation, learning, sociability and happiness to grow – all in play. We humans have evolved to buzz together in peaceful, joyful sync. It’s why we make music.

At the time of the play therapy scene I described above, Colwyn Trevarthen and I were co-editing Rhythms of Relating in Children’s Therapies. The aim was to explore communicative musicality in many forms of therapy, theatre, research, and education. Musicality is an essence, with musical principles – but it is essentially amodal. It is not just about music and the hearing sense. It is about all levels and potentials for human connection. I loved the idea of focussing on such an essence, of bringing together many people across the world and from many disciplines based on what we share, not what separates. It was great fun dialoguing with all the contributors of the book. So much inspiration. We feel the book holds onto that sense of fun whilst looking in-depth at many sensitive areas of therapy with vulnerable children.
I hope you enjoy it.

Stuart Daniel is a Play Therapist running a therapeutic service for children with emotional and behavioural difficulties in Devon, UK. He has published journal articles concerning early patterns of communication, autism and play therapy.

If you would like to read more articles like this, hear the latest news and offers on our Arts Therapies books, why not join our mailing list? We can send information by email or post as you prefer, and please also tell us about your areas of interest so we can send the most relevant information. You can unsubscribe at any time.

We had SO. MUCH. FUN. on Tuesday night when we held an online book launch to celebrate the publication of Letters from the Grief Club! We've uploaded the recording to our YouTube channel: https://youtu.be/-LcL5Y-gUO4

Read this blog to learn more about the Yoga4Health protocol, who it's for, and its proven benefits 🧘