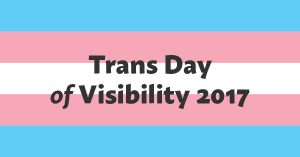 We asked author CJ Atkinson what Trans Day of Visibility means to them personally.

International Trans Day of Visibility was founded in 2009 as a reaction to the lack of LGBT holidays celebrating transgender people’s successes, and is dedicated to celebrating the accomplishments and victories of transgender and gender non-conforming people, and raising awareness of the essential work that is needed not just to save trans lives, but to make the world a little bit more accommodating.

Trans Day of Visibility 2015 was a tipping point – an explosion of trans people taking to Twitter, Tumblr, Instagram and Facebook to show their beautiful, hopeful faces, intending to demonstrate one important thing: trans people exist. For me, TDoV 2015 was a personal victory: it was one of my first public “there’s no going back now!” coming out moments as, with strep throat and feeling rough as anything, I posted a selfie and whispered ‘here I am’ into the void.

Fast forward to 2017, and for the past six months I’ve never felt more seen. In fact, by the time TDoV comes around, I will have said for the 29034th time “I’m so tired of talking about this.” Not because conversations about trans issues are unimportant, but because as a trans person living and working in the world, visibility is always going to be something that walks hand in hand with vulnerability. Because I’m tired of constantly asserting the same thing, and answering the same questions. Because I’m bored of people asking me if I’m in the right bathroom. Because “Should trans people-” is a format of question that causes an aggressive response of STOP IT in my head. Because my existence isn’t a debate. Not even a little bit. Not at all.

What I know about visibility is this: the internet is a place where the best of people, and the worst of people, bump shoulders on the daily, like a commute to a destination nobody really signed up for.  On the good days, you will meet people who remind you why you do what you do, and on the worst days, you’ll feel every negative emotion you’ve ever experienced for another human being. I’ve learned that exposure at any cost isn’t worth the price of admission, and that people on Twitter are breathtakingly rude. That I refuse to be grateful to people who concede to the existence of trans people but only on their terms. That there is no such thing as ‘The Trans Experience’, but that every time someone shares theirs with me, I’m blown away by how alike and how different we are. That I have no idea what makes a man, or a woman, or a non-binary human being, but that I believe fully and firmly in our right to be who we are.

So this Trans Day of Visibility, I want to say thank you to the heroes whose footsteps I walk in. To every trans woman who, on a daily basis, faces attack, assault, abuse and indignity from every single side, and yet still manages to hold up her head, and always always turns up to support other people. To every trans man who feels constantly and consistently eroded, overlooked and ignored. To the non-binary humans who face dismissal, erasure and ignorance. To the people who dare to make themselves visible, and fight for the rights of other people, and who make the world safer for people like me-of-2015 who had to rely on other people to be brave.

If I could talk to the me of two years ago, I wonder if I’d believe it when I say that it only takes two years to change just about everything. That in two years’ time, I’ll find myself humbled to tears by the attitudes of friends and strangers, who go out of their way to say kind, gentle, supportive and encouraging things. That I will have stood in rooms full of people I’ve never met before and assert not only my transness, but my right to the space I take up in the world. That I’ll be in rooms of people I know who look out for me as much as I look out for them, without reservation or question. That I will learn words for the alien feelings in my body, and as hormones and body chemistries change, feel the incredible rush that these body parts belong to me.

Most importantly, for Trans Day of Visibility, 2017 I want to say thank you to the trans people who are invisible; to the people of history, who continually get erased from their own stories; to the people of the future, who face fear, or threat, or the intractability of a world that keeps falling over itself to pass judgement. It doesn’t feel like it, but I hope a year, two years from now, you find yourself standing somewhere feeling the most you you’ve ever felt.

For more information on their book, Can I Tell You About Gender Diversity?, click here.