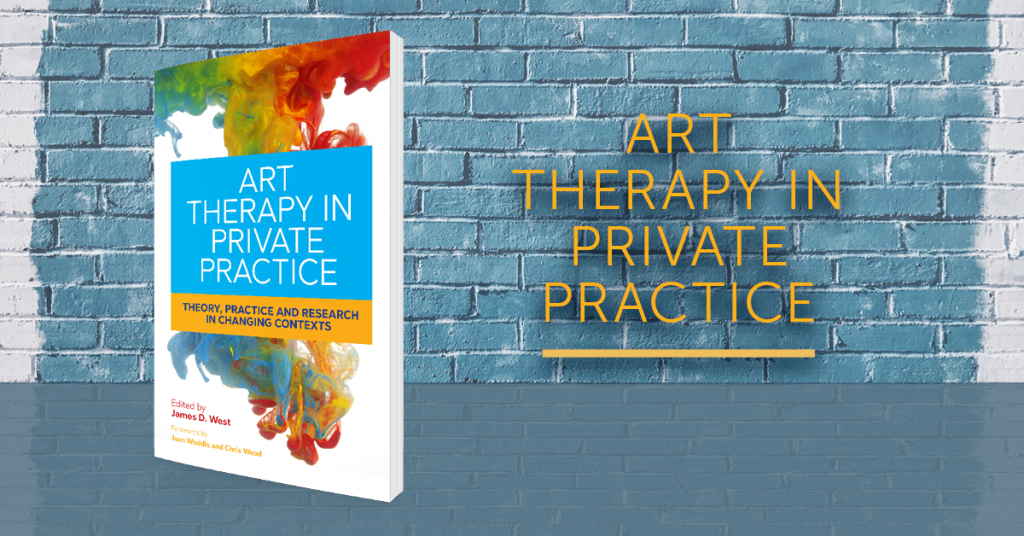 This blog is based on a speech delivered by author James D. West at the launch of the book Art Therapy in Private Practice on the 7th October 2017 at London Art Therapy Centre.

I have learnt a lot through the researching process of editing this book but the most important thing I have learnt has been to understand the centrality of storytelling in our practices. Telling the story, and trying to get it right!

In exploring the question ‘What Art Therapy in Private Practice is?’ we have told stories and spoken of the larger narratives that inform our work to reveal some of the peculiarities and virtues of our world.

As I was looking back at my emails I was surprised to discover this project began four years ago in late 2013 when Gary Nash and I formed the initial proposal for the book with some of the authors here, but at the old site of London Art Therapy Centre in Archway.  It was two years later that we found a publisher and began to write in earnest. We had regular authors’ meetings and developed the Mind Map to help us to focus on the broad themes that we discovered to be the central concerns of our practices.

This ongoing dialogue helped us to set each chapter in the broader context of these concerns more consistently. The book became a collaborative research document as the authors drew out the central themes that formed and reformed the Mind Map which, like a sort of conceptual squid, kept moving around its tentacles.

The book also reflects the work of the British Association of Art Therapist’s Private Practice Special Interest Group (BAAT PPSIG), set up by Gary Nash and Amanda Wright in 2008 and which I currently coordinate. It continues to offer a network for art therapy private practitioners across the UK.

BAAT Council’s support and sponsorship of the Special Interest Group (SIG) is represented in the book. The BAAT ‘Core Skills and Practice Standards in Private Work’ appears in the Appendices and BAAT also provided background support, making available the research officer to answer some of our pressing research questions, and also in offering us anonymised peer review through the Dual Experience Group.

In the Appendices you can also see a copy of the United Kingdom Council for Psychotherapy Practice Research Network’s (UKCP PRN) ‘Moments of Meeting’ questionnaire as evidence of broader professional alliances.

In the book we also reflected on the learning that had occurred in the SIG meetings held in Sheffield, Manchester, and Wales over the last six years.

What gradually became very clear is that different practices in different contexts evolve different ways of knowing. In the book I have called this contextual epistemology.  We certainly didn’t always agree in the author’s group and I now see these tensions as a vital signs of the activity of real learning.  The overarching process however showed how a group of professionals, and their clients, can usefully work together to create representative stories from sometimes very different contexts, revealing both their shared and divergent ideas, yet slowly building a rich and lively picture of what we do.

Within art therapy in the UK there has been considerable suspicion about the standards and objectives of art therapy in private practice. We aimed to address these issues directly.  Consequently I believe we have gone a considerable way to create a fuller, and fairer, picture of our practice in this area.

Returning once more to stories… Now that we have begun to represent where we are and how we got here, we can look forward and ask ‘What will become of art therapy in private practice?’ and you will see from the book that we have better reasons, than we initially thought, to be optimistic.

I am now busily trying to ease the passage of the book to its readers and this has become the next exciting episode!  My hope is that all the sincere and heartfelt work that has gone into these chapters will shine through and be recognised, appreciated, enjoyed and used by its readers, providing a fresh and inspiring perspective at this crucial and testing time.

James D. West is an art therapist in private practice. He is a peer reviewer for the International Journal of Art Therapy and coordinator of the BAAT Private Practice Special Interest Group.