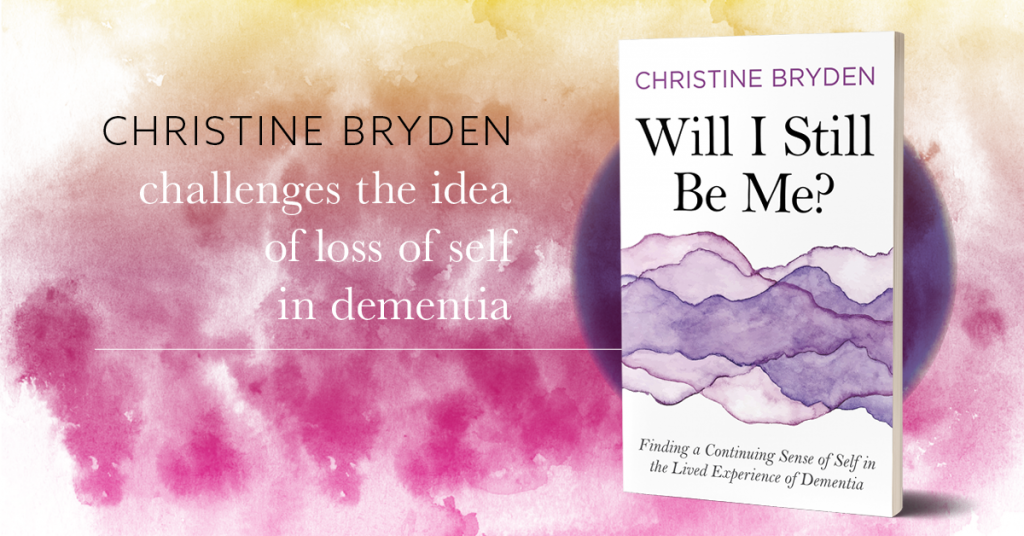 We met with Christine Bryden in our London office after the release of her new book Will I Still Be Me?  We talked about her more than 20 year-long journey with dementia.
What was it like to be diagnosed with early onset at the age of 46?
What does dementia mean for her now?
What is the ‘self’? Are people with dementia losing themselves?
Christine shared her experience, her views and more importantly a message of hope for all of those who live with dementia and for their families.
Below is the full transcript of her video interview.

“Yes I find it really hard to tell you all the events in my life but they don’t have to stretch over a whole long time, I can tell you the meaning of the moment and that’s just as meaningful.”

What was it like to be diagnosed with young onset dementia at the age of 46?

It was a huge shock back in 1995. What’s changed for me are all the deficits, [inaudible] my memory loss, difficulties with language, my difficulties speaking, many difficulties. That’s what changed for me the condition. And also when I was first diagnosed there was no one else, no one speaking out about it and I felt like a freak because I could still speak and people saying “oh surely you don’t have dementia because you can still speak”. So, it was awful. I don’t think there was anyone else for the first 5 or 6 years, then I met a few people on the internet but even then just a few of us.

What does dementia mean for you?

It was a loss of my cognitive work-self that completely was lost in, I say almost overnight because I was told to leave work straightaway, so I straightaway was someone different, someone without a job. I used to advise the Prime Minister of Australia on science and technology, very high power job, all of the sudden I was nobody. So it was a big big difference in the first few years and I’ve been just picking myself up off the floor ever since.

In your new book you challenge the idea of loss of self in dementia and talk about how a continuing sense of self is possible. How?

Lots of people say “oh she’s not longer there”, or “I’m losing my husband to this dreadful disease”, or “she won’t hear you, she is not here [inaudible]”. It’s terrible when people say that, we might not be as functional cognitively, we might not be able to speak, but we can hear. I really spent a lot of time, a couple of years, thinking about this, reading, reflecting and I thought about the fact that we still have, no matter even in the last stage of dementia, lying in a fetal position on a bed, last few days before dying, can’t speak, I can hear. I’m still an embodied self, I’m still me in terms of I’ve got my hands, face; and also when people come and smile at me and have eye contact I have a relational self and then in the moment, in that moment of connection, I can find a narrative of meaning, other people say, people always say ‘you’ve lost your story, you’ve lost all your autobiography as a person with dementia’ – well yes I find it really hard to tell you all the events in my life but they don’t have to stretch over how long time, I can tell you the meaning of the moment and that’s just as meaningful.

You have played an important role in raising awareness around dementia worldwide. What has it been like?

What’s really amazing it’s that I don’t have to do it anymore, there’re so many people out there, fantastic women and men speaking out and playing a prominent role in raising awareness. When I first spoke out it was horrible, nobody believed me, just awful and it was a long hard slog trying to get people to listen and to believe us. You know, If we could speak, we had dementia because people used to say “because you can speak you don’t have dementia”, so how were we meant to represent ourselves. So being part of that network is so uplifting, is so inspiring to listen to the voices of people speaking out.

[…] If only they’d listened and believe me, it was as if everybody else was too scared to speak out, people diagnosed didn’t want to speak out because they’re embarrassed, dreadful thing to have. I’d say look “why would dementia be any different from cancer, or a broken arm or what have you” why did they treat us so badly, why did they not believe us?

What is ‘the self’? Are people with dementia losing themselves?

Well it was part of my studies and I read quite extensively, it was called ‘Public and contextual Theology PhD’ and I found myself able to do it with Paul’s support (note husband) just sitting there reading all this stuff typing endless notes about what I was reading knowing that I would forget what I read. But I had some vague understanding that i.e. if I typed I would… the notes would come up so I studied and studied and studied and thought about it and I thought well and I related to people with dementia I’ve met we were all still embodied, we still could look down and see our body. ‘What is the self?’ and I started thinking about that, ‘Is the self our mind?’ No. ‘Is the self only what we can do? And say?’ No. ‘Ourselves’ is our existence as a body in addition though not as a hermit, but in relation to some other people and that was what was really important for all of us right to the end of dementia. Then in terms of narrative self I looked at all that stuff that said about people with dementia losing their story. I thought that’s wrong we’ve not lost our story we’ve lost our memory of the story […].

We still have the story but we need some help to put it together, relate to it and we can connect meaningfully with bits of it. It’s wrong to say we’ve lost our story. Might have lost our memory, our words but I’ve known people who helped people with dementia to connect with their story with their autobiography.

In Will I Still be Me? you touch briefly on the role of your faith in your dementia journey. How did that sustain you and others you met?

It has been the mainstay for me, I’m not saying it will be for everybody but for me it has been the holding empower all the way through, it’s kept me steady throughout the downs and troughs on how I felt during dementia so I’ve talked about that in the book but importantly it’s a secular book, I talk about all the many people I’ve met with dementia who have been people of many faiths or no faith and how they retained an embodied self or relational self or narrative self with little vignettes so I’ve written notes up and they are all actually true stories but obviously disguised with name disguised to try and show how all of us have, still have, an ability to retain aspects of ourselves and there are aspects… it depends how you define self. There are all sort of aspects. Yes, we might have lost cognitive aspect doing, saying, calculating, remembering stuff, like I can’t remember the title of my book without looking, obviously things like that! I’m deficient even if I might not look deficient. Yes, it’s trying to delve into that and into the relational self, that’s where I highlight my relationship with god and how that sustained me and how sustained others.