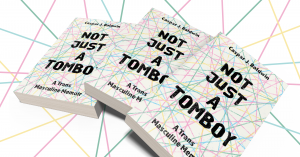 Not Just a Tomboy is the debut memoir from trans-masculine author, Caspar Baldwin. Set against the shifting cultural attitudes of the 90s to the present day, Caspar shares his story of growing up with a suppressed gender identity, until the realisation that he is in fact, trans.

In this extract, Caspar details his first experience of bra shopping with his mum as a young teenager, and describes the mental and physical reaction he had as a result of gender dysphoria.

There was nothing I could do. It was the summer of 2001 and I was trapped in the car as Mum took the turning into the King’s car park next to the Harlequin Shopping Centre. She had just spoken those few dreaded words that had me feeling as if I’d been rammed through with a spear, ‘We’re going to Marks and Spencer to get you properly fitted for a bra.’ It was always going to come to this, but I had pushed it violently out of my conscious thoughts, clinging to the desperate hope that they wouldn’t grow large enough to make it necessary.

Why was it even necessary? For health? For function? It certainly wasn’t for the tribeswomen I’d seen in the National  Geographic in many a doctor and dentist’s waiting room.
Clearly it hadn’t been for the thousands of years human and other female hominids had existed back in the archives of time. No, this was about the obsession with aesthetics. In this world you’ve got to look a certain way or you will be judged. If your breasts move freely on their own, even a little bit, you will be judged. If they are allowed to be a natural teardrop shape and not perfectly spherical mounds shoved right up next to your armpits, then you will be judged. Some people may say it’s a free choice, but that could not be further from the truth. Ask yourself, how many people assigned female at birth are given it as a free choice? No, they will be told they must wear them, for fear in this patriarchal world, of inciting sexual advances and to prevent sagging. They will not be told there is no good justification for that assertion whatsoever and will become among the huge majority of people who still believe that bras prevent this natural consequence of ageing.

‘No! I don’t want to!’ I begged, I pleaded as Mum locked the car and began marching me towards the shops. ‘You don’t want them to sag!’ she said. ‘And it’s not nice for other people if you don’t wear one! This is not a negotiation!’ I stood in the little fitting room cubicle engulfed in anger and humiliation. I’d just been measured by a brisk but professional lady with half-moon spectacles and a tape measure around her shoulders who’d duly gone off to fetch some try-outs. Rooted to the spot, I folded my arms firmly across my chest, defensive until the last. At least I had won the argument about underwire.

To continue reading this extract, just follow this link.

To buy a copy of ‘Not Just a Tomboy,’ click here.