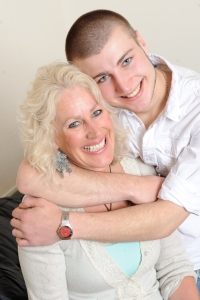 Jan Greenman is the author of Life at the Edge and Beyond: Living with ADHD and Asperger Syndrome – a searingly honest account of bringing up her son, Luke. Writing frankly about the medical issues of Luke’s early years, including the impact of MMR and Ritalin, Jan recalls how Luke’s diagnoses of Asperger Syndrome and ADHD came about, and how life at The Edge, their aptly named family home, changed as a result.

Here, Jan shares some thoughts about her lively and unpredictable life with Luke, and about an amazing honour he received earlier this year.

Living with Luke’s labels is a daily rollercoaster ride and sometimes I want to opt out, especially as I am now, as Luke describes me to his friends, a ‘post 50 woman’ with less energy/ patience to keep up with his alternative way of thinking and behaving!

His conditions still bring to our household extreme, edgy and unpredictable behaviour each and every day. I say in my book that the only predictable thing about Luke is his unpredictability and so we still never know what to expect from him and more to the point, neither does he.

In April of this year Luke (now 18yrs) won a National award for his public speaking and mentoring of younger children with autism. He was filmed live on the BBC News Channel receiving his award from Konnie Huq at the Rotary International’s conference in Bournemouth and it was a very proud day for us as he was one of only 5 young people across the country to receive such an award. Who would have thought that the boy in my book, expelled from mainstream school just 3 years ago for his autistic and angry behaviour, would be standing on a platform being interviewed on national television in front of an audience of 2000 people for his ‘inspirational achievements’?

As I said to the BBC though, when they asked me for my reaction to his award, ‘he’s still hell to live with’ and he is! Our family, including Luke’s younger sister Abbi – who has contributed to the book with tips at the end of some chapters, Luke’s stepdad and four stepbrothers, all agree that living with Luke’s labels enriches our lives, and it unquestionably does – BUT we still have to endure the daily dramas that his autism/ADHD cause. He fills our house with his mates, who accept him as he is, strange habits and all, and enjoy his larger than life attitude and his ability to mimic all their favourite TV characters. He still doesn’t ‘do’ consequence and has no idea of what it’s like for the rest of us to share his space. I texted Luke at 3.30am this morning, telling him to keep the noise down and go to bed – he was sitting in our back garden with his mates all roaring with laughter as he held court, entertaining them with his usual LOUDness and with absolutely no awareness of the fact that the rest of us had to get up in four hours time. We can’t be cross with him though as it is just lovely to see/hear him making up for all those lonely years, spent in his own little autistic world in his bedroom, with no mates and no life.

Only a family’s love can and will enable him to achieve his huge and alternative potential, whilst living with the facts of Luke’s own inimitable brand of 24/7 chaos.

Watch a clip of Luke receiving his award on the BBC!

You can book Luke to speak at an event by contacting Jan at janet.greenman@sky.com.

You might be getting ready for bed, playing with friends at the park or having fun on the bus when suddenly a scary thought pops into your head.

Let a wise owl guide you how best to manage #anxiety and scary thoughts in #CheekyWorries.

One of the greatest shifts in identity occurs when we become a ‘mother’ or ‘father’. The emotional wounds we carry from our childhood get projected into this most intimate emotional parent-child attachment relationship. #sevencoreissues #parenting #attachment ⁦@JKPBooks⁩