Dr. Ellyn Lucas Arwood has established a reputation as an expert in how language is used for learning and how language and cognition interact, and is often referred to as a “lady before her time”.

Here Dr Arwood answers some questions about her new book, Language Function: An Introduction to Pragmatic Assessment and Intervention for Higher Order Thinking and Better Literacy.

How did this text came about?

As a speech-language pathologist in the late 1960’s, I wondered why some children could say a sentence but not ask to go to the bathroom; why some children could repeat by memory a complete commercial or word call printed text but not ask another child to play; why some children could score higher in expressive language than receptive language when the Western Psych model says that input comes before output. The structural approach to literacy that I was trained in did not make a lot of sense in practice. Teaching words, sounds, psychomotor skills, and behavior tasks provided children with progress on skills but not on thinking and learning. So, I began to read everything in any discipline that I could about how to help children understand what they read, speak from thinking ideas, and write about what they knew. I deliberately worked on a doctorate at the University of Georgia (USA) where I was allowed to enroll in courses that would give me the education in language philosophy, sociolinguistics, semantics, and pragmatics so that I could incorporate that knowledge into my practice. After doing a dissertation in speech act theory (1977) which demonstrates the importance of the listener in speaking with children severely impacted by a variety of disorders such as autism, emotional disturbance, behaviorally disordered, other health impaired, I went to work at Washington State University where I had the opportunity to teach others how to apply this knowledge.

At a presentation at the American Speech and Hearing Association, an editor came to me and ask me to start writing. Thus, I wrote my first book, Semantic and Pragmatic Disorders, in 1980. But the readership wanted more theory and I was not satisfied with my knowledge. I needed to know “why” some of what I did worked. I continued to write books, articles, and so forth to try to balance the theory with the practice; something that I personally believe is what we, as professionals, should be doing. When I accepted a job at Texas Tech University, I had the opportunity to study and do research in the area of pragmaticism while also working as a professor of speech and learning sciences. The notion of pragmaticism is that the synergy of the whole (mind, body, brain) is greater than the parts – and with that concept comes a theory of signs that allowed me to incorporate a knowledge of the level of thinking that goes with using the mind for academics, social issues, and behavioral constructs. 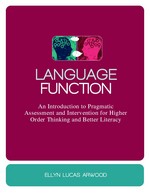 Throughout this entire process of building my knowledge, I never lost sight of the influence of the brain research. To me, it was obvious that the brain was the basis to all learning and that pure developmental models could not explain how a child learns to think. So, I took classes in brain research such as human brain dissection at the Kresge Institute in Louisiana and medical physiology at Louisiana State University. The brain research of the early 1990’s supported much of what I believed about the way children learn to think and use their thinking to function which added another layer to understanding how language functions. For the past 25 years, as a professor in education at the University of Portland (Oregon, USA), I have collected more data about thinking, added to my knowledge about learning, and refined the methods in practice. Now, it is time to get this knowledge into our community and schools, which are microcosms of how society functions. Thus, the rationale for this new book, Language Function.

Recent studies have shown that the majority of English speakers don’t “think in sound.” What does this mean?

Thinking is about ideas. Ideas that are in the form of mental pictures, movies, graphics, print are not in sound. These visual mental images are the foundational piece to being literate for most people. So, instead of sounds existing as the basis for better reading and writing, visual images are the basis for understanding the print, for seeing what is on the page, for writing ideas on paper, for increasing mental thoughts for better speaking, for understanding concepts of number for better math, and so forth. The majority of learners that I work with tell me about these visual mental images that they use for thinking. They do not use the sound of their own voice for learning new ideas….new ideas come from the changes in their previous visual images.

What are the implications of this for education?

The major implication is that we need to rethink what the basis of literacy is and then change literacy programs to match thinking.

I believe the most apparent challenge in education today that represents what I refer to as a “cultural-linguistic mismatch” is the fact that educators are exposed to lot of data, materials, programs, and training that says that sound is the basis to literacy. Suggesting that sound is the basis to literacy is logical since these educators live in a culture that uses English as the primary language of educating children in subjects, skills, and dispositions. English is a sound-based language where individual sounds can change the meaning. For example, in English, adding “s” to “dog” turns the word into a plural concept. So, culturally using the sounds that go with the alphabet makes sense to an adult who has acquired the sounds of English for speaking, reading, and writing, even though the educators may or may not be, personally, able to relate to using sounds for spelling to write or for reading a favorite novel. But, the data says to use sounds and the educator sees the logic and so the educator does so. However, huge numbers of children are not really successful so the educators try to modify the programs, materials, the amount of time, the number of students in the programs with fewer and fewer resources.

The educators today try to make the assumption that sound underlies the development of cognition work in order to help children become literate. Educators work extremely hard to make students successful in these programs but educators are constantly confronted with “unhappy” constituents–the public, the media, the test scores, their own family success or lack of success, their students’ families and so forth. The bottom-line, is that the programs, materials, and curricula that are sound-based do not match with the way the children think to learn. So, teachers work harder but don’t always receive the positive success they deserve. Older students work harder to produce the sound-based patterns for tests, homework, and so forth without the conceptual learning. Working harder but not smarter stresses everyone out – students, families, and teachers.

What is the connection between visual cognition and (anti-social) behavior?

All behavior communicates. The meaning of the behavior is interpreted by someone else. In this way, we learn the behavior of our dominant culture as a relationship between doing something and having someone else tell us what the behavior means. When others assign meaning to a behavior, the thinker has to be able to receive the message. If the person who assigns the meaning only uses spoken language that the learner does not understand, then the behavior has no meaning.

For example, if the child stands on the seat at a restaurant and the adult says, “Sit down” to a child who thinks visually, then these words mean nothing. So, the child not only stands on the seat but jumps up and down and starts making vocalizations that are loud. People sitting around the child are not able to talk with their families because the child is so loud. The child’s vocalizations are interrupting the behavior of others which is the essence of anti-social behavior; behavior that negatively affects the initiation and maintenance of healthy interpersonal relationships. Finally, the child’s family punishes the child by harsh words, a slap to the child’s behind, taking the child out and so forth. The child knows the family member(s) are not pleasant so the child cries but the child still does not know what the expected behavior “looked like”; what other people in the restaurant were thinking (their visuals of the child); how the child’s behavior made other people’s mental pictures go away and interrupted their dinner, etc. Learning to behave requires teaching in the way the child learns concepts. Visual thinking or cognition requires a visual assignment of meaning.

What strategies might you suggest specifically for those working with children on the autism spectrum?

Children with autism spectrum disorders typically use a motor (movement) access to their visual mental thoughts. So writing with visual-motor methods is great and, in fact, will help many children acquire speech production. They write to tell what they see on the page. But, all of the methods described in Language Function may be used successfully with children with autism spectrum disorders. There are many examples in the book that are from children diagnosed with ASD.

What is the bigger picture – how might literacy programs that match thinking benefit society?

The benefits are numerous; but, social competence for the majority of society would be great. In other words, having a society where the majority are able to initiate and maintain healthy relationships at work, school, and home because individuals are able to see how they fit or are successful as part of society would decrease the number who are dependent on others for survival including a decrease in incarcerated individuals; a decrease in anti-social behavior at schools and in the work place; a decrease in unethical acts of business in the marketplace and so forth.

This benefit will happen only if the majority of people are able to reach a concrete, rule governed, level of thinking that implies parallel levels of literacy. In other words, a thinker can only be ethical and moral if the thinker is able to accept the rules of others as the basis for thinking and behaving – only if “We” takes over the 3-7 year old “I” attitude in the workplace and in doing business with others. The “We” attitude means that “I do only what would also be of benefit to others as if I were in that other person’s shoes.”

Societies grow and develop just like interpersonal relationships. So, a healthy society is one where a majority of thinkers have increased their literacy and improved their thinking to function as a place for “Us;” a place where people care about other people and their needs. Most people say they “care” about others but without the literacy and thinking level increasing, the majority can only do their job at the level of regurgitating the rules, imitating tasks, and completing the prescribed task. Thinking out of the box, creatively solving a problem for a customer or helping create a solution requires higher order thinking and problem solving.