Kate Lambert is a drama teacher working with young people, many of whom have special needs. Her daughter Lille was diagnosed with epilepsy at the age of five. Here, she talks about some of the misconceptions about epilepsy and how her new book, Can I tell you about Epilepsy?, will help parents, teachers and others properly deal with seizures and other issues associated with the condition. 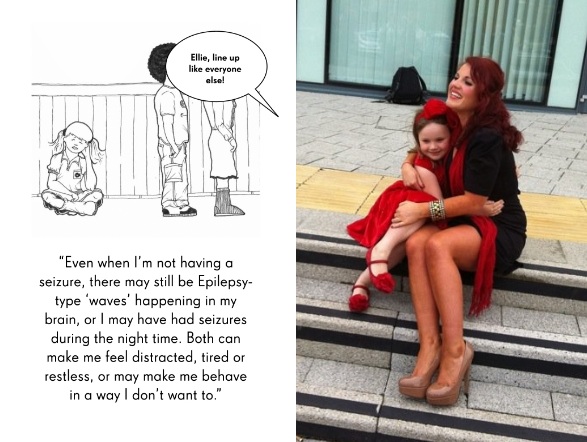 Can you tell us a little bit about Ellie, and the other characters in your book?

Ellie is the main character in the book who invites us into her world and that of her friends who have epilepsy. Ellie and her friends represent some of the major forms of the condition. Ellie herself represents Absence Seizure epilepsy, common in children and often misdiagnosed or misunderstood. Ellie is based on my own daughter, Lille who was diagnosed with epilepsy at the age of five. Her seizures were often going unnoticed and her behaviour being labelled as other things rather than as a result of her seizures. I wanted to create a character who could simply explain the facts in black and white so that others can understand. Sometimes all that is needed for a child who has a condition is a little bit of understanding from the people around them. The other characters in the book, Ellie’s friends have different forms of epilepsy and therefore have different seizures such as tonic clonic and focal (partial) seizures.

What are the misconceptions about Epilepsy? How can this book help?

Often when people speak of epilepsy we conjur up images of full body jerky seizure known as tonic clonic seizures but this is just one form of Epilepsy. The book helps people understand the lesser known forms of the condition.

What are the top three tips you would give to teachers who have a child with Epilepsy in their class?

What do you hope this book will teach people about how to act when someone is having a seizure?

A seizure can look very strange, dramatic or depending on the type of seizure may go un noticed to someone who has never seen one before. The book explains the signs of a seizure in its many different forms. Recognising these, will help people feel confident in how to deal with a seizure and know some basic first aid for tonic clonic seizures.

In what ways can this book be used?

The book can be used as a starting point for discussing epilepsy for parents and their children, older children and their friends or peers and teachers and their students. It may be helpful for parents to offer it to a teacher teaching their child for the first time or for professionals advising parents and other people who care for the child with epilepsy.