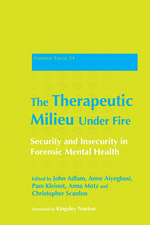 What therapy can be offered to people with forensic histories and how might it work? What can we learn about the minds of offenders from observing our own reactions to working with them? How do teams working with dangerous and disturbed people survive? How can organisations themselves become perverse and abusive, and how is it possible to prevent this through reflective practice and team development?

In The Therapeutic Milieu Under Fire, we explore these and other essential questions in forensic work in organisations and institutions. We work with highly complex, disturbed, dangerous and endangered people; trying to keep their thinking alive despite conscious and unconscious assaults on the therapeutic relationships and on the milieu itself.

This book is based on a series of seminars organised by practitioners that promoted psycho-social enquiry into the nature of forensic systems of care and the qualities of their relationship to the excluded outsider.

This book also reflects on this particular historical moment and it movingly describes the impact of the lethal attacks that have been carried out against organisations and institutions that were dedicated to providing care for some of our most vulnerable fellow citizens. It argues powerfully that it can be a false economy to ignore the wealth of accumulated practice-based evidence and to offer, by contrast, so-called evidence-based, technical-rational packages of treatment under the guise of improving access to psychological therapies.

This volume is in the form of a series of psycho-social and ‘groupish’ associations to the theme of the therapeutic milieu under fire. The approach is trans-disciplinary and it offers spaces for conversations between service-users, nurses, social therapists, project workers, housing support workers, probation officers, psychiatrists, social workers, group analysts, psychologists, psychotherapists, managers, civil servants, educators, researchers and the general public (among others) about the changing and complex relationship between troubled individuals and their troubling social, organisational and institutional context.

The contributors all work on the ‘frontline’ in one way or another, many working with marginalised and excluded outsiders at the edges of our exclusive society. This book explores the ways in which these outsiders are offended against and how, in turn, they offend against others, within systems designed both to care for and to contain them. What is the task of the professional caring for a mentally disordered offender? How can they offer security without custody, or care without collusion or detachment? When does ‘care’ become a perversion of ‘control’? Why is thought replaced with action and why might it be so hard for the milieu to replace action with thought? These are some of the central questions that were debated in our one-day seminars, and whose dynamics are explored in this text.

In presenting this range of papers, and the multiple complexities that these authors explore, we hope to enable the reader to come to a better understanding of the ways in which the therapeutic milieu comes under fire from without and within, so that we can think together about how to remain thoughtful and committed to the task while anticipating and responding to these inevitable attacks.

Thinking under fire is essential in this work, and so too is reconstructing our internal and external milieu. The systems-psychodynamic thinking of the International Association for Forensic Psychotherapy and the therapeutic community model combine in contemporary practice to give us a model of the conscious and unconscious processes that inform criminal acting out or the expression of personality disorder: a model that helps us to make sense both of the violence in the patients and the violence in the societal response.