Chris Mitchell author of Asperger’s Syndrome and Mindfulness and the forthcoming Mindful Living with Asperger’s Syndrome explains how he was able to use some of his unique Asperger strengths and mindful thinking skills to help him complete his toughest challenge yet – climbing Mt Kilimanjaro. 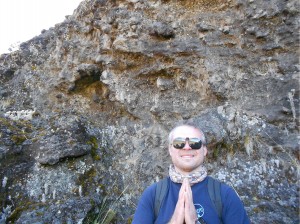 difficult. As a person with Asperger’s Syndrome, I have found that facing up to challenges outside my comfort zone helps me cope with my stress and anxiety difficulties. One way I like to challenge myself is by taking on mountain treks and mindfulness practice exercises, including my most recent and difficult personal challenge, taking on Africa’s highest peak, the 5895m high mountain Kilimanjaro in October 2013.

It has been said that climbing a mountain is equivalent to what people and families affected by Asperger’s Syndrome experience everyday. For me as a person with Asperger’s Syndrome, it is a way to face up to many  challenges, such as trekking among a group of strangers, coping with frequent changes in weather conditions, being away from home conveniences and other sensory experiences. Where worry and anxiety can creep into the mind prior to embarking on such a venture is through initial perceptions of different challenges along the route may treat or affect you. Through mindfulness practice though, of which I had done much in my preparation for the trek as well as physical exercise, I found it more conducive to think about how I could approach the challenge positively.

Like other people with Asperger’s Syndrome, I have had a tendency to view the world almost through my own version of Bridget Jones’ Diary or from a ‘Catcher in the Rye’ perspective, where the main character Holden Caulfield continually sees the world through his frustrations. Though hearing about the world through an Asperger perspective is often helpful when understanding what it may be like to live life as a person with the condition, one also has to remember that people on the autistic spectrum share the same social and physical world as others, though they may perceive it very differently. When trekking in a group, each member of the group is, like myself, on a journey and has their own story or motivation for undertaking such a challenge.

Through our lives, we have an intimate relationship with the world that we inhabit, but are often ‘shielded’ from it through habits we develop within day-to-day routine which builds up a comfort zone around us. So 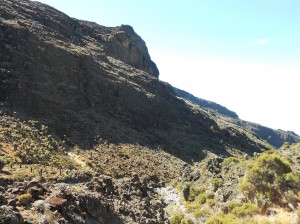 metimes it is easy to cope with challenges by hiding behind Asperger tendencies, including habits and tendencies to avoid or resist such situations in relation to personal preferences. But by doing this, one can then become constrained by Asperger-related preferences rather than in control of them. This is why it is often more helpful to open up to them rather than hide from them. This is especially the case when you find yourself in varied and extreme environments such as camping, sleeping on mats rather than mattresses, and where there is no running water or shops to load up on supplies. One must  think about the clothing, tools and resources at their disposal rather than planning ahead and thinking about what one has to budget for.

Often in my life, I have experienced difficulties trying to  fit in socially with a new or different group of people. Yet with my fellow trekkers  I was able to find common ground very quickly,  perhaps it was because it was a big step outside our comfort zones for us all. Being away from one’s normal environment also presents different and sometimes challenging sensory experiences, not just how your body copes with varied weather and micro-climates, but also wearing different clothes to cope with different conditions that one may not normally wear that are tighter, such as long johns or are of a different texture, such as fleece.

Rather than resist such challenges, I found it helpful to be with them, allowing each moment to unfold with each step. Worry and doubt that a person with Asperger’s Syndrome can find themselves constrained by can arise from looking at the walking distance or climbing height that one sees in front of them to reach their goal. One of the challenges along the route towards the summit is the Barra

nco Wall, over 200m high, which I was to ascend on day four after I had made it through the heat of the rainforests and rain and mist I encountered passing through lava fields and acclimatising at the Lava Tower (4630m). At first sight, the Barranco Wall looks like an almost vertical cliff, but from both previous trekking experience and mindfulness practice of being with each moment in an intimate way, I found that approaching the wall in a more intimate, more mindful way, the experience of it felt different to how it appeared, more like a steep staircase than a vertical wall.

The big push to the summit  was the biggest challenge for both myself and the whole trekking party. This part of the trek begins at midnight in temperatures lower than -10! It was a step outside a comfort zone within what was already a step outside my comfort zone as I had never previously trekked in darkness. But where the darkness worked in my favour was that as I couldn’t see the distance or elevation ahead of me, it enabled me to focus more on the first yard in front of me. After trekking for about eight hours, I eventually managed to reach the summit at Uhuru Peak (5895m).

Coming back down was as big a challenge. Compared to trekking uphill in darkness, coming downhill after feelings of elation of reaching the summit and being able to see the campsite where we would descend back to in the daylight, it was sometimes easier to focus on the destination rather than the next few yards ahead. As a result, I slipped once or twice on scree-covered rocks. But after adapting to dryer and dustier conditions, I started taking each step much more slowly, including where necessary side-stepping. 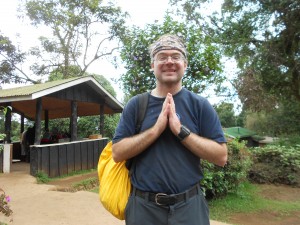 A personal strength that I feel I have developed since my diagnosis with Asperger’s Syndrome is my ability to face challenges and difficult situations on a daily basis. Attention to detail, is another personal strength that I have developed. This alongside the qualities of mindfulness that I practiced on the climb helped me with noticing and being with the different sensory experiences and giving each step of the trek full attention, including being able to respond and treat different conditions appropriately, despite the occasional slip! At the end of the trek, I was able to notice clearly how the effects of the challenges I had been through had affected me bodily. I certainly felt I came back with enough visual evidence to suggest I had made it!

Chris Mitchell trekked to Kilimanjaro in aid of the Daisy Chain project, helping families affected by autism on Teesside, raising over £1,000 for the charity. His new book, Mindful Living with Asperger’s Syndrome, is due to be published by Jessica Kingsley Publishers in December 2013. In the book, Chris  describes mindfulness exercises, including mindfulness of walking and techniques to help cope with sensory issues. He will be giving a talk and workshop based around the practices described in the book at the NAS Professionals Conference, which takes place at Harrogate International Centre, 4-5 March, 2014.