From using ancient techniques to cross inhospitable terrain to walking with a highly sophisticated robot,  Chris Mitchell, the author of Mindful Living with Asperger’s Syndrome reflects on the many kinds of mindful walking. 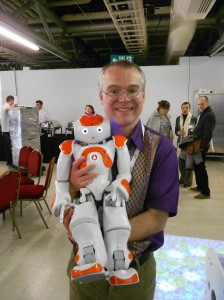 When new to meditation and mindfulness practice, an initial image that we may have of meditation is of a figure sitting cross-legged with their eyes closed. Understandably, a person with Asperger’s Syndrome who engages in repetitive movement as a way of coping with anxiety and finds sitting still for an extended period of time difficult may be put off seeking mindfulness practice from this mindset. As well as sitting, the Buddha also taught three other meditation postures; standing, reclining and walking. Many people who have found sitting meditation difficult take surprisingly well to walking meditation.

Though we do a lot of walking in normal day-to-day life, we may forget that much of our walking is done on autopilot, within the routine of our comfort zone. When we step outside the routine of our comfort zone into different environments, including when stepping onto different surfaces, or when walking with someone, we notice how little attention we usually pay to sensations that come with each step when we walk on autopilot. This is especially brought to our attention when you are walking with someone who has very tiny footsteps!

At the 2014 NAS professionals Conference, as well as give a seminar on Mindfulness Techniques and Asperger’s Syndrome, including some of the exercises described in Mindful Living with Asperger’s Syndrome, I also got to practice mindfulness of walking with a new friend, Mickey the Robot. Designed to help children with autism in both special and mainstream schools to develop empathy and build on their social skills, NAO Robots, designed by Aldebaran Robotics, are able to respond to human speech and movements and even have the ability to laugh. The first thing that Mickey asks you is: ‘What do you want me to do?’ He then asked me if I would like to go for a walk with him!

Mickey shows he is able to interact in a tactile way when he puts his arm up for you to hold his hand and begins to walk. Noticing that you are walking with him, he then reminds you that he only has very tiny footsteps and that if he has to walk too quick he may fall over! Becoming aware of this, I began to pay more attention to the speed and sensations of my own footsteps, stepping as short and as slowly as I could. When walking with Mickey, as well as being more aware of my footsteps, I also felt I began to feel empathy with him, just by being conscious of his walking needs and not wanting him to fall over! 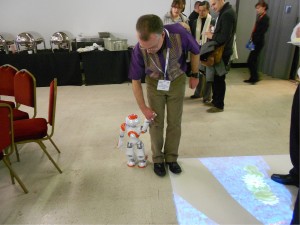 After the conference, it was then my turn to fall over numerous times with a trip to Tromso in northern Norway, north of the Arctic Circle. Leaving behind mild weather in the UK, when I arrived north of the Arctic Circle, I noticed that I was in habitual walking mode when I slipped and fell on an icy surface. Walking on different surfaces, especially ice or snow, often require different techniques of walking to cross, not only when going up and down inclines but also on flat gradients. Though it helps having the appropriate footwear, one also has to be more aware not only of the sensations of their footsteps but also of their centre of gravity, which helps keep us upright, something which we are not normally aware of when walking habitually. In the Chinese legend Journey to the West (known as Monkey in most English-speaking countries), about the journey of the monk Xuan Zang from China to India to retrieve and translate Buddhist scriptures across mountainous terrain, part of his journey involves walking across clouds from one mountain to another. Though he is given special cloud-treading boots for this part of the journey, he has to be able to master their use before embarking on his endeavour. This involves being with each step and noticing where he places each step so that he doesn’t fall through the clouds.

Similarly, in Norway’s Lyngen Alps, I took to cross-country skiing to cross a snow-covered route. Unlike downhill skiing, cross-country skiing involves a lot more walking, with the boots being more flexible and only fastened to the skis at the front. The skis help one move across the snow, but one also has to get used to a different technique of walking than the habitual walking we do in day-to-day life, being aware for the first few yards in front of you, including the hardness of softness of the snow you are stepping on. When going uphill, one finds themselves more in tune with pressure from sensations from the strength required to go up the hill. When going downhill, because there is often a feeling of relief, one can find themselves in a false sense of security when it becomes difficult to control your speed, having to bend knees to slow down. 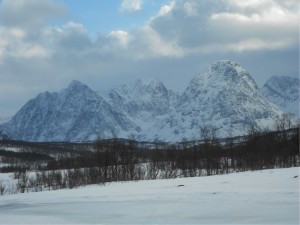 Just because I practice mindfulness, it doesn’t necessarily mean that I am mindful in each and every moment of my life. Like all human beings, I am just as capable slipping out of mindfulness into habitual thought and movement. Where in fact mindfulness is in noticing when your mind wanders and you fall into habitual movements, including on our walking, sitting, standing and reclining postures.

Mindful Living with Asperger’s Syndrome by Chris Mitchell was published by Jessica Kingsley Publishers in 2013.