In the first of a two-part interview, JKP author, educator and counsellor Julian Cohen  shares some of the insight and experience he has gained whilst working to educate young people about drugs over the past 30 years. 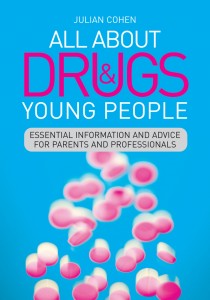 1. Your book emphasises that nearly all of us use drugs and have a lifetime drug career. Can you explain what this means and why it is something we need to be aware of?
If we define drugs as mood-altering substances we have to include medicines, caffeine and alcohol as well as illegal and other socially taboo drugs. This means that, in today’s world, we nearly all take drugs from a very early age. You might even say that we experience drug use before birth because many substances taken by pregnant mothers cross the placenta and can affect a foetus.

Too often we tend to think of drugs as only being illegal or other socially taboo substances. Yet medicines, caffeine and alcohol can also affect our moods, stimulate or depress our body systems and sometimes cause us problems. Medicines and caffeine play any increasing role in the lives of young children and are present throughout our lives. In fact many young children expect and sometimes demand medicines when they do not feel well or cannot easily get to sleep. Inadvertently we are teaching young children that, if you want to change the way you feel, you buy a drug and take it. You could almost say this is like an apprenticeship for future social drug use. At the other end of the age spectrum many elderly people take a plethora of mood-altering medicines.

We nearly all self-medicate on an array of mood-altering substances throughout our lives. When things are going relatively well for us our drug use tends to be more moderate. But when we experience difficulties our drug use tends to increase in an attempt to keep difficult feelings at bay. The real issue is not whether we take drugs or not, but whether we have a relatively successful, safe and pleasurable, what I call, drug career or a more damaging one.
And when it comes to understanding young people’s drug use, and their motivation for using as they do, it helps if we reflect on our own drug careers and the lessons we can learn from them.  In the introduction to my book I have written about my own drug career, and those of significant people in my life, and how reflecting on that has helped form my own attitudes and views about drug use.

2. One of the most commonly asked questions when speaking about drugs is; how easy is it to spot the signs of drug use? How do you know if someone is using drugs?
Following on from my answer to the previous question you can see that we nearly all use drugs and often there are unlikely to be anyway give-away signs that we do. Most people ask this question with regard to young people using illegal and other socially unacceptable drugs. The difficulty here is that unless you are with a young person when they are actually under the influence of drugs you may have no idea that they use drugs at other times. And even if they are behaving strangely or out of character they may be doing so for reasons that may have nothing to do with drug use. For example, they could be ill or have had an emotionally traumatic experience. Some publications list changes in behaviour that may indicate drug use but most of these things could be due to other things. The danger of looking for set signs and symptoms is that we will jump to the wrong conclusion and even start accusing young people in a way that prevents honest and open communication with them.

You might also find what you think is a drug or drug paraphernalia. Whilst this may indicate drug use it can be difficult to know exactly what you have found and whether a substance is actually the drug you suspect. Pills, powders and herbal-type mixtures are often not easily identifiable. They may not be what you first think they are and might be for purposes other than you assume or fear. And similarly what you think may be drug paraphernalia could be things that have other, non-drug uses.

My main point is that looking for signs and symptoms of drug use is no substitute for communicating with young people. And to do this effectively we need to avoid assuming the worst, keep calm and actually listen to them.

3. The book also talks about how the dangers of drugs are often exaggerated; what do you mean by this and why you think it is an unhelpful approach?
As I explain in some detail in my book there is a long history of us exaggerating the dangers of illegal and other socially taboo drugs whilst underplaying the risks of alcohol, medicines and other more socially acceptable substances. We also tend to ignore the dangers of non-drug activities that we often encourage young people to participate in, such as outdoor pursuits and extreme sports. Statistically such activities are often far more likely to result in injury or death, than using drugs. In this sense we can be very hypocritical about young people’s use of drugs.

We also tend to take extreme examples of cases where young people have died using drugs and try to present these as norms and as a warning not to use drugs. The problem here is that many young people find out from their own use and by hearing from others, that drug use is not as risky as we make out. In fact it may well be an exciting and fun experience for them. They then distrust adult sources of information about drugs and feel we are lying to them. The result is little open dialogue between us and young people. Drug use can be dangerous but we need to be honest with young people and keep the risks in perspective.

4. Similarly, you talk about how a lot of people have inaccurate ideas or information about drugs. What are some of the main or most damaging myths?
There are so many commonly believed myths about the effects and harms of particular drugs, about the people who use drugs and why they use as they do, about how drugs are obtained and how much they cost, about dependence and addiction and about what we can realistically do about drug use. In fact there are so many myths that I will not go through them here. Many of them are listed in my book where I invite readers to think about and discuss particular myths they may think are true and to be aware of the lack of evidence for them.

The difficulty for us all is that many of these myths are commonly used and re-enforced in the media and by politicians and other social commentators. In many cases we seem to be so anxious about drugs that we lose our capacity to think sensibly and rationally and instead latch on to soundbites and mythology. This creates unnecessary fear and is not a good basis on which to have meaningful discussions with young people about drugs or for parents and professionals to make decisions about how to respond to their drug use. And, of course, it is also not a good foundation on which to make decisions about drug laws and wider drug policies in our society.

5. You have specialised in educating young people about drugs for many years. In what ways do you think drug use by young people has changed in recent years?
The large scale surveys that are carried out on a regular basis do not give an accurate picture of overall drug use among young people but they do give us some indicators. It is clear that, more recently, fewer young people have been smoking cigarettes and slightly fewer have been drinking alcohol. The figures for those who have tried most illegal and other socially unacceptable drugs have also fallen.

However, new trends and new substances are emerging that give a different picture. Cocaine use is now more common amongst young people than 20 years ago and although ecstasy use has declined the recent trend to more use of powder, rather than just pills, may see numbers using increasing again. Use of ‘newer’ drugs such as GHB, ketamine, mephedrone, nitrous oxide and PMA has emerged and, as I emphasise in my book, there has been a very significant increase in the use of legal highs, substances that mimic the effects of illegal drugs but are not (yet) controlled under drug laws.

So whilst there may have been a decline in the number of young people using certain drugs, many young people are still using and they now have access to, and are selecting from, a broader range of drugs. We also know that young people in the UK tend to drink more alcohol and use other drugs more often and in greater quantities than many of their European counterparts.

There are also questions as to whether or not more of the young people who do use drugs are using in greater quantities and/or becoming dependent. The evidence is not clear but there are concerns that the ongoing recession, high youth unemployment and lack of opportunities for many young people may mean that more of them may become involved with heavy use of drugs.

The other point I wish to highlight is that young people’s drug use has increasingly become part of the general pattern of commercialisation and consumption that is now such a feature of life in the UK. In this sense drug use has become both more individualistic and more mainstream. Some commentators now talk of the normalisation of drug use amongst many young people.

You can read the second part of this interview, in which Julian talks more about legal highs, as well as how parents and professionals can support young people, how we can help if a young person develops a serious problem with their drug use, and what he himself learned whilst writing the book, here.
You can also read a free extract from Julian’s book, All About Drugs and Young People, in this blog post.

Julian Cohen is a writer, educator, counsellor and consultant who has specialised in drug and sex education work with children, young people, parents, carers and professionals for nearly 30 years. He has written extensively on drugs and young people, ranging from teaching and training packages to educational games, pamphlets and books for young people, parents and professionals. Find out more about Julian including his training courses and consultancy work on his website, here: http://www.juliancohen.org.uk/