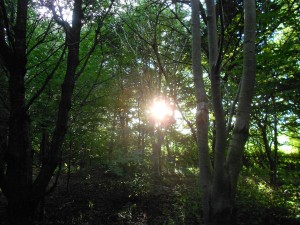 When trying to make sense of the social world as a person diagnosed with Asperger’s Syndrome I have often found myself learning social skills through observing those around me, especially non-verbal gestures such as facial expressions and eye contact. This can often leave little scope for exploring one’s own emotions and feelings, such as being able to notice how they arise and pass and where they take control over one’s actions. Stepping back from the flow on a ten-day Vipassana retreat enabled me to get in touch with this.

One of the purposes of ‘Vipassana’ (which means to ‘see things as they really are’ in the Pali language) is to help those who practice the technique to experience themselves as they are and experience sensations as they occur. By sensations I refer to anything experienced at the physical level, both those that arise from internal bodily feeling and those that arise from external factors, such as the surrounding temperature or the materials of the clothing one is wearing. A mixture of sensations occurs throughout the body constantly, but due to the many distractions around us we are often oblivious to them and how they can determine our thoughts and actions.

Observed in noble silence for ten days with no verbal communication, no non-verbal gestures or signals and no contact with the outside world, a Vipassana retreat provides a distraction-free environment in which one can get more in touch with oneself and be able to observe the comings and goings of thoughts and feelings, including different degrees of Asperger-related obsession with thoughts. As a person with Asperger’s Syndrome what I found so helpful about there being no non-verbal communication was that I find trying to interpret a lot of non-verbal gestures (including understanding how other people feel about me) very confusing, which can then become a source of worry and anxiety, especially if I feel someone is giving me the ‘silent’ treatment. But during the retreat, being aware of the absence of non-verbal communication helped reduce a great deal of this worry, thus giving me more freedom to explore and understand the workings of my own mind.

During the first four days of the retreat participants are instructed to focus on the breath coming in and out around a triangular area from the tip of the nose to the upper lip, one gradually begins to notice a range of physical sensations that arise and pass around this limited area. Participants are encouraged to observe different sensory experiences as they occur rather than create sensations that we find comforting, allowing each breath coming in and out to be as it is naturally and each physical sensation to arise and pass as naturally as possible. On the fourth day one is then instructed to gradually expand awareness throughout the body, scanning through the body slowly starting from the top of the head.

Participants practice this technique for up to ten hours a day throughout the retreat, including three hour-long sittings of serious determination where one shouldn’t make any major movements to their posture or open their eyes unless absolutely necessary. This is so that as well as noticing different sensations or any urges to move, (such as averse sensations around the knee joints when sitting) one is able to observe their response rather than acting on it and acknowledge that sensations, both pleasant and painful are impermanent and subject to change.

Where I find Asperger’s Syndrome can be a strength during practice is through applying attention to detail and being able to notice sensations very closely. Sometimes, due to sensory preferences, the mind can end up being controlled by sensations that can lead to one becoming controlled by obsessive thought. With continued practice and patience, I found  that I was able to exert more control over my mind, including Asperger-related tendencies and obsessions, rather than allowing them to control me. Thanks to this I noticed that each night I was going to sleep much quicker than normal. I felt I was able to notice sensations on a deeper level, including blood flow and vibrations throughout my body coming from my heart beating. Normally, my mind distracts me from going to sleep.

I came home from the retreat thinking that although our physical make-up takes up a limited physical space it has a huge degree of variation with regards to what it is made up of in both a spiritual sense (with the five elements, earth, water, wood, fire) and in a scientific sense. Atoms and particles (the source of most physical sensations) are a constant in our make-up and we are unaware of how much they are influencing our thoughts and actions and how they trigger habits and obsessions. With awareness developed from patience and practice one can eventually exert more control over the mind, and thus more freedom from mental constraint, including anxiety and depression.

On my return to the outside world I noticed just how dependent we can be on external factors for happiness and self-esteem because we aren’t often in tune with how we are within. Turning our mirror neurons towards us enables us to see who we are as we are in the present, rather than being constrained by the need for outside approval. In turn, being happy in this way reflects well on those around us.