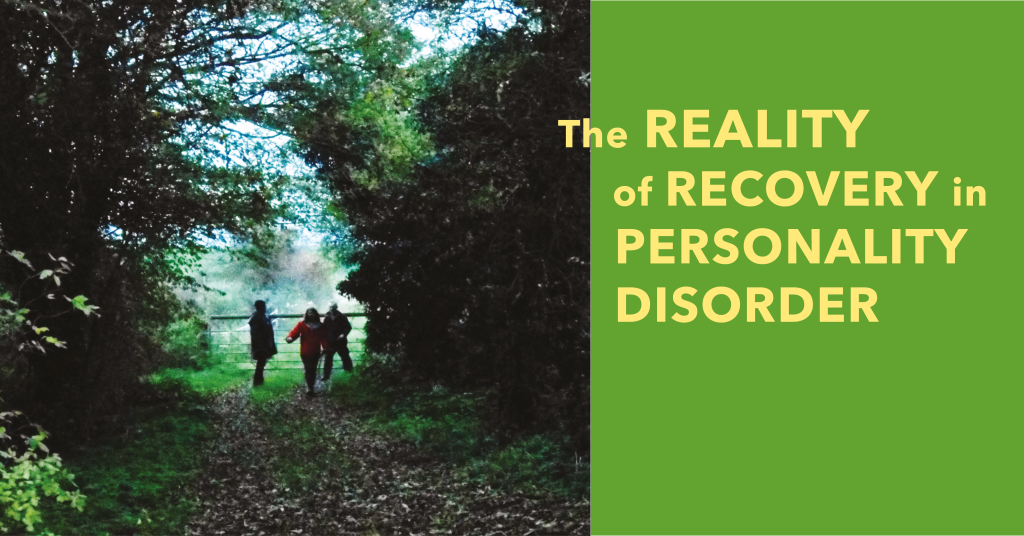 Twenty years ago, personality disorder was defined as enduring and inflexible and was usually considered untreatable.   If I had moments of doubt, regarding embarking on a study of this human puzzle, they weren’t many.  The adversity experienced by those who had attracted the diagnosis was too compelling.  The assumption that professionals know best how conditions should be defined, and how services should be configured, was a similarly popular perception at that time.

My subsequent twenty-year journey concerned research with people diagnosed with personality disorder.  Driven by the ideas and needs of service users, our ensuing service developments aimed to build a new model of understanding and progress, one which could even make the old ways obsolete.  The early 2000s proved to be a fertile time for innovation when the Department of Health invested in pilot services which allowed a kind of exploratory latitude that I have not experienced before or since.  This gave us heaven-sent liberty to create a new and very different kind of service and a golden opportunity to extend our research studies.  At this time there was no agreed rationale of recovery for those diagnosed with personality disorder and few researchers had sought the views of service users regarding this.  We wished to continue to explore research methods that incorporated subjective accounts of recovery because we believed that professionals would find little guidance about what might help recovery from a medically-oriented randomized controlled trial.

The concept of recovery essentially arose in the service user movement, however, it was an idea which was soon hijacked by mainstream services becoming a clinical concept concerned with cure.  This was experienced as an unrealistic expectation and a burden to get well.  The word recovery has different meanings suggesting that conceptual clarity is necessary.  First is the traditional concept of recovery as cure which is located within an illness framework.  Second is the personal definition of recovery which has emerged from service user narratives.  These accounts emphasize the understanding of recovery as a process that can still take place in the presence of symptoms and disability.  Recovery is about finding abilities, possibilities, interests and dreams.  This was a crucial concern for our research group members and they set out to define recovery in their own terms.  They believed that the term recovery implied returning to a previous state of being, whereas members were seeking to create a new future, the future they wanted.  Standing on the firm foundations of a clearly defined concept of personal recovery, by 2004 we had established our new service.  I have long believed that, as human beings, thriving is our default setting.  Up to now this had not proven to be the case for our service users, however, the homeliness and peacefulness of the new service and the sense of hope that permeated the air had an effect on all of us.

Living too long with untenable emotions and in a state of chronic hyper-arousal, people with a personality disorder diagnosis frequently adopt dysfunctional behaviors to numb unbearable feelings and to swiftly bring their mood down to a manageable level.  Hurting the body can create temporary calm because of endorphin release.  Such behaviors include self-harm and substance misuse.  This is how people have coped and, for many, they become deeply ingrained coping strategies.  The damaging expression of pain needs containing measures, therefore, to create psychological safety at the new service these self-destructive behaviours needed to be actively challenged.  An Acceptable Behaviour Policy was created in collaboration with service users and administered by them.  If someone broke the rules laid out in this policy there were consequences, and that person would be invited to a community discussion with peers.  During the course of our research 51 (85% of participants) discussed the use of negative coping strategies and 46 (over 76% of participants) reported a dramatic reduction in their use, suggesting that the concept of boundaries had become internalized.

Initially we were engaged in developing healthy attachment in terms of safety and trust, feeling cared for, a sense of belonging, and learning acceptable boundaries.  Next we discovered that only when this was sufficiently consolidated did service users begin to learn to contain their past experiences and build necessary skills to progress.  Meaningful therapy cannot take place, no matter how desperately it is needed, if trust does not exist and if behaviour is chaotic, risky and destructive.  Healing is about integrating experience by making sense of what has happened.  Prior to this stage, reality often proved to be unbearable and making sense out of traumatic experiences and child abuse is a difficult thing to do.  This marked the long process of beginning to re-frame traumatic experience.   However, a focus on a deficit in skills, and all that has gone wrong in the past, can create a sense of hopelessness.  Therefore, the fostering of hope and the building of confidence became vitally important in activating the internal resources necessary to conceive of and pursue dreams and goals.

Supporting recovery is about helping people to build self-esteem and identity and to find valued roles in society.  This began to translate into internal changes concerning sense of self and external achievements in the various domains of social inclusion.  However, despite progress, significant fears and barriers to the concept of recovery were also highlighted in relation to risking what progress had been made.  Because the word recovery could potentially become synonymous with the idea of loss of support, it became essential to further define it in a tenable way.  As a result, the concept of Transitional Recovery was born, meaning that progress would be defined as an ongoing journey of small steps, involving the retention of new-found healthy attachment, and new structures were incorporated into the service to help build confidence with outdoor-well-being pursuits and social inclusion initiatives.

Developments which stemmed from the  unique knowledge of service users, about what would best support them and help them to progress, shows that it is possible to work effectively with a relatively large number of people with a personality disorder diagnosis, well in excess of a hundred at one time, at different stages in their journey of recovery, many of whom had not made progress in other service settings, resulting in significant financial savings to the health, social care and the criminal justice system.

Dr Heather Castillo worked for many years in Mind organisations in Essex, developing advocacy for people with mental health problems. She has worked with service users, training and supporting them to become legitimate researchers in the field of mental health. In 2004 she helped to set up, and became the Chief Executive of The Haven Project, which began as a Department of Health National Innovation Site for the support and treatment of personality disorder. In 2011 she completed a doctorate at Anglia Ruskin University, UK, about the process of recovery in personality disorder. She lives in Essex, UK.

Learn more about The Reality of Recovery in Personality Disorder