Author Marina Cantacuzino explains how a journalistic idea evolved into the charity  The Forgiveness Project; dedicated to building understanding, encouraging reflection and enabling people to reconcile with pain and move forward from trauma in their own lives. Eventually, her work with the charity led to the publication of The Forgiveness Project: Stories for a Vengeful Age – Marina explains how it came about and why she wanted to create a book from the stories she’d heard and the messages she’d learned.

In 2004, after 15 years as a print journalist, I founded a charity more by default than design. I had created an exhibition (entirely journalistic in format with personal testimonies hung alongside photographic portraits) which explored forgiveness in the face of atrocity. It was meant to be a one-off event but the public response was so overwhelmingly positive that it led to me founding The Forgiveness Project charity.  The next 12 years was spent consumed by running it, whilst my writing took very much a backseat in my life.  So being commissioned by JKP to write The Forgiveness Project: Stories for a Vengeful Age, became a project very close to my heart – not only because it was about a subject I was by now totally enthralled by but also because it brought me back to first love of writing.

My lengthy introductory essay in the book encompassed everything I wanted to say about this complex subject of forgiveness. I had no wish to add to the already 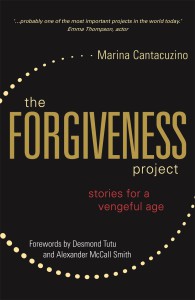 extensive literature out there analysing the subject from a philosophical, psychological, religious or personal point of view.  I just wanted to share and illustrate my understanding of forgiveness clearly through real stories.

I had already met and interviewed, and in many cases developed a personal relationship with, the people whose stories I wanted to share so the really difficult thing was deciding which of the 140 stories already on The Forgiveness Project website should become a part of the book. In the end I felt far too close to the content to make what felt like such a personal choice and so asked JKP editors, along with other selected readers, to help me select 40 stories which would best present forgiveness as nuanced, messy, painful but fundamentally transformative.  In this hotly contested territory  the only thing I know for sure is that the act of forgiving is fluid and active, can change from day to day hour to hour depending on how you feel when you wake in the morning or what triggers you during the day.  Forgiveness can unfold like a mysterious discovery, or it can be a totally conscious decision, something you line yourself up for having exhausted all other options.   The stories had to reflect this fluidity and present different and diverse positions.

I wanted the Foreword to be written by The Forgiveness Project’s founding Patron, Archbishop Emeritus Desmond Tutu, who admired the charity’s work and who I had met on a couple of occasions.  However, trying to get this request to him, through several different channels, proved fruitless.  After six months I had still heard nothing back and so instead asked the author Alexander McCall Smith. Although perhaps not quite the international Forgiveness figure that Tutu was, nevertheless McCall Smith was a world famous author who I knew believed in the power of forgiveness.  Some years back, out of the blue he’d sent a letter to our offices saying:

‘I am very interested in the subject of forgiveness – it is a theme that I explore in a number of my novels. The importance of forgiveness is something that has definitely been lost in an age of confrontation and recrimination.  So the work you are engaged in is of immense significance.’

Alexander McCall-Smith was quick to respond positively to my request and has written a Foreword which is both insightful and intriguing.  And then, just as the final manuscript was done and dusted, I heard from Desmond Tutu himself saying he was indeed more than happy to contribute a Foreword to my book.

In the end we used both Forewords – and the book is all the richer for it.

The Forgiveness Project: Stories for a Vengeful Age is now available in paperback.

Find out more about the book, watch Marina speak about the subject of Forgiveness, or order your copy on the book page here

If you would like to read more articles like this and hear the latest news and offers on our child psychology books, why not join our mailing list? We can send information by email or post as you prefer, and please also tell us about your areas of interest so we can send the most relevant information. You can unsubscribe at any time.