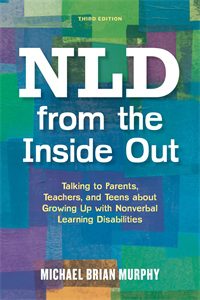 JKP authors Judith and Carson Graves, authors of Parents Have the Power to Make Special Education Work, sat down with Michael Brian Murphy to discuss the new edition of NLD from the Inside Out. Offering invaluable advice for teenagers and young adults with Nonverbal Learning Disabilities (NLD), this book explains what NLD is, how to understand your NLD brain, and how to thrive socially and academically. The book also includes guidance for parents, teachers and therapists on the issues that people with NLD want them to know. NLD from the Inside Out is the only book to offer first-hand teen perspectives on NLD, combined with useful, practical advice.

Michael Brian Murphy spent most of his years in public school in special education, not sure why he was there. His diagnosis was the ambiguous “non-specified learning disabilities,” and he felt that his teachers regarded him as “different” from the other students without understanding why. It wasn’t until he was a young adult that he received a specific diagnosis of Nonverbal Learning Disability or NLD.

This diagnosis led him on a quest to better understand himself and write about NLD to help others, first as an undergraduate student at Clark University, majoring in Psychology, then as a graduate student in Hebrew College as a Master of Arts in Jewish Studies, and now as the author of this book, which has been updated and revised from earlier editions. Mr. Murphy writes with an authentic voice and with great compassion, wisdom, and humor. He understands NLD from first hand experience and explains it in detail. He also shares stories from others in the NLD community to give the reader greater insight into how people live with it. Most of all, he offers advice on how to live a satisfying and productive life. This book is an inspiration to us and we hope it will be an inspiration to you as well.

Recently, we interviewed Michael Brian Murphy to find out more about how this remarkable book came about.

Michael, congratulations on the third edition of your book! We enjoyed reading it and feel it will be a great resource for anyone who has NLD or wants to understand it better. Can you tell us a little about your reasons for writing about Nonverbal Learning Disabilities?

Thank you very much! As you alluded to in the introduction to this article, I had been in SPED since first grade after my teachers noticed that I was “different,” and I spent the first 2/3 of my life in SPED or equivalent, knowing that I had some kind of learning disability but not knowing exactly what it was. I was 24, almost 25, when I first found out I had NLD. I had actually gotten a previous diagnosis of “Social Emotional Processing Disorder,” but all the notes on that one said “…but see the research on Nonverbal Learning Disabilities,” so I did.

You write that your research shows that NLD does not need to be a permanent condition. Could you elaborate on this?

When I conducted the survey for the First Edition, I had participating NLDers self-report to what extent they showed various symptoms at ages 6, 10, 14, 18, 22, 26, and 30. What I found was that not only was there a lot of change in how these symptoms manifest over time, but that they change at different rates. Some symptoms just seem to be stuck at “poor” or “fair” no matter what, some improve steadily over time, and some don’t seem to have any regression pattern whatsoever. But the ones that really surprised me were the symptoms – in particular, self-esteem, holding authority figures in esteem based on rank, ability to show empathy, and ability to trust others – that started off “good,” worsened over time, and improved once again, sometimes rapidly, once the NLDer turned 18. I suspect this may have more to do with being in school than with NLD itself.

Several chapters of your book are based on interviews with others, like you, who have also been diagnosed with NLD. What common ideas and experiences did you find and did any of the responses surprise you?

Between the surveys for the first and third editions, as well the initial interviews, plus my own experiences, about half of the book is based on qualitative data. Having NLD myself, the answers themselves given were not unexpected, but what was really surprising was their emotional power: the sheer level of righteous indignation, uncensored confession, anger, sadness, pride in accomplishments, and oftentimes outright snarkiness. That’s a LOT of untapped feeling. But you know what? When you’ve lived your entire life going through a series of therapists, doctors, and other assorted adult authority figures who don’t “get” you, and now you start talking to a fellow NLDer, this is “therapy” that actually works, and we end up healing one other.

You write about the importance of finding a community where those with NLD feel valued and where they belong. Can you share some tips on how readers can find these communities?

Well, a lot of the old chat rooms and forums from the late ’90s (NLD on the Web, NLD In Common, nlda.org, etc.) are now either inactive or defunct. Many of the older blogs (Weird Not Stupid, One Foot On The Spectrum, Odd Girl In, Socially Unaware, The Odd Bird, and many more) are still online, but not very active. Now it seems that all the “big names” in the NLD field are on a Facebook group, plainly titled NLD – Non-verbal Learning Disorder.

Is this the kind of book that you and your parents needed when you were growing up? What are you hoping that your readers will gain from reading this book?

Yes, I have heard time and again from many parents of NLDers (my own mother included) that they wish they had this kind of a book when their NLD kids were growing up, since it not only tells them (both parents and children) what to expect, but what approaches to reward and punishment don’t work, how to listen to each other, and how to approach changes in routine – whether major or minor – diplomatically, so that the NLDer feels he/she is actually heard. What I hope readers will gain is more understanding, and that each and every symptom of NLD is neurologically based. We are NOT making this stuff up.

What kind of feedback have you received so far from your readers?

Mostly, the feedback from parents has been mixed between praise and requests for more advice, help, and referrals. From the NLDers themselves, there’s also been praise, but more often relief: finally, someone not only understands them, but has written a book to get the adults in their lives (mostly parents) to understand them as well. So far, I’ve received hundreds of communications from 37 (and counting) countries, so the word is getting out! I really appreciate you inviting me to speak to your readers, thank you.

Reposted with permission from: http://www.makespecialeducationwork.com/interview-michael-brian-murphy-author-nld-out-2/#sthash.gEov48Hp.dpbs

You can learn more and purchase a copy of NLD from the Inside out here.

You can also purchase a copy of Parents Have the Power to Make Special Education Work here. You can discover more resources and check out their blog at the authors’ website.