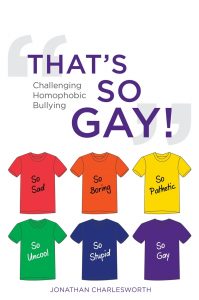 Jonathan Charlesworth, author of That’s So Gay!, discusses the concerted effort by the government and anti-bullying organisations to tackle homophobia in schools but admits that there is progress still to be made. Observing that it is very important just to be yourself in life, he asserts that, in order to be so, restraints such as homophobia need to be removed.

Are you a secondary school teacher or college tutor keen to help a student who’s questioning their sexual orientation and would welcome some guidance? Perhaps you’re a primary school teacher eager to challenge homophobic name-calling or bullying?

In the modern day, civil partnerships are legally recognised throughout the United Kingdom and same-sex marriages are similarly conducted everywhere except North Ireland. It’s an offence to incite or commit a homophobic or transphobic crime. Meanwhile, all our schools and colleges are bound by a Duty of Care to ensure their pupils or students are safeguarded against homophobic, biphobic or transphobic (HBT) bullying. Add to this the finding from a YouGov survey that 49% of young people aged between 18 and 24 define themselves as something other than heterosexual (1) and you would think we wouldn’t have any problem with homophobic bullying in or out of our schools and colleges.

Yet lesbian, gay or bisexual young people including those questioning their sexuality remain vulnerable to harassment and far too many are still experiencing bullying in our schools.

The Department for Education is making a welcome and concerted effort to assist organisations like Educational Action Challenging Homophobia (EACH) to challenge HBT school bullying (2). Meanwhile the Scottish government announced this November that a new anti-bullying strategy had been developed with its LGBT organisations(3).

This is welcome news since, as I stressed in my 2015 book, That’s So Gay! – Challenging Homophobic Bullying, this form of bullying can have a devastating impact on young people’s mental and physical health.

Pupils are likely to remove themselves from social interactions in class and other activities previously enjoyed. Schools are likely to witness a slump in grades and whole-day or ‘in school’ truancy. They are ‘there’ but not attending all their lessons to avoid their tormentors, and even if they are in class they are definitely not ‘there’ in terms of concentrating on the lesson. Ultimately one may observe their departure from your school to another or they may become a school refuser.

The severity of the effects on a pupil depends entirely on the individual, their resilience and coping strategies. Inconveniently for us, each pupil will react differently to homophobic bullying. We and the schools in which we work however have a legal, ethical and moral obligation to provide equal access to education and equal protection under the law for all our pupils or students.

Recently a county’s PSHE Adviser sought my advice regarding parents removing their children, on religious grounds, from classes where same-sex relationships were knowingly to be discussed. These ‘removed’ pupils will still learn about same-sex relationships, but through their own experiences which will all too often happen in an informal and potentially far from ideal context. Better, surely, that children and young people learn about the adult world they will grow up to inhabit in a supervised, professional setting where misinformation can be corrected and religious or cultural sensibilities contextualised and accommodated.

I’m the Executive Director of EACH and since 2005 we’ve worked continually with the forward-thinking Wyedean School in Gloucestershire. I’m looking forward to working again with both their pupils and staff in January 2017. As a former English teacher, what always delights me is that Wyedean School is author JK Rowling’s old school and just the other evening, following work at the school, a television interview (4) with her by the actor Warwick Davis struck me as highly pertinent to this piece about homophobic bullying. Referring to the protagonist of Fantastic Beasts and Where to Find Them, her latest film squarely targeted at a young audience, Joanne Rowling said,

“Newt Scamander has an understanding of people who may be stigmatised or ‘othered’. That’s at the heart of most of what I write and certainly so in Fantastic Beasts.

“She celebrates that it’s okay to be different – to be yourself: quirky, geeky – be who you are. Whatever your self-perception you have a place in the world.”

Harry Potter and the Philosopher’s Stone begins, “Mr and Mrs Dursley, of number four, Privet Drive, were proud to say that they were perfectly normal, thank you very much. They were the last people you’d expect to be involved in anything strange or mysterious, because they just didn’t hold with such nonsense.”

“But,” comments JK Rowling, “what is normal and what does that mean for those of us who don’t conform to those norms which actually, when you start drilling it down, is a huge number of people? It took me decades of my life to realise that not only did I have to be me but that that was okay. And now I can find out what that means and how I can be the best me.”

So here’s what I hope That’s So Gay! provides you with as its reader. On the one hand it’s a book full of strategies to support a child in your primary school who’s experiencing homophobic name-calling (at an age too young for either perpetrator or target to even know their own sexuality) simply for being ‘different’. On the other it’s to assist secondary schools or colleges supporting students questioning their sexuality or who already know that they’re lesbian, gay or bisexual and are just seeking reassurances around this.

In That’s So Gay! you’ll also discover how to recognise homophobic bullying, who experiences it, why people do it (and what you can do about this) plus how its targets can be bystanders or perpetrators of bullying in other circumstances – precisely because of bullying they’re experiencing elsewhere.

Covering both the ethical and legal reasons for addressing homophobic name-calling and bullying across all settings, That’s So Gay! will inform the 2017 revision of your Anti-Bullying Policy and PSHE curriculum, ensuring it adequately addresses this form of prejudice based bullying.  As a result your primary or secondary school or college can enhance its determination to become an increasingly safe place for each one of your pupils or students.

That’s So Gay! is a practical guide to dealing with homophobic bullying in all its guises, working with those who bully and supporting those who are bullied. It is a matter-of-fact resource to help create safer, more inclusive environments. Written by an expert in the field, it is a vital guide for schools, teachers and anyone with a duty of care towards young people.

If you would like to read more articles like Jonathan’s and hear the latest news and offers on our books, why not join our mailing list? We can send information by email or post as you prefer, and please also tell us about your areas of interest so we can send the most relevant information. You can unsubscribe at any time.