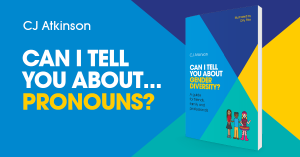 CJ Atkinson, author of ‘Can I Tell You About Gender Diversity?’, shares their thoughts on a series of important topics in the trans world. Here, they explain why using the correct pronouns for a trans person is so vital.

In my life, I know a staggering number of people called Dave. Two of my immediate neighbours are called Dave. My barber’s called Dave. My friend’s boyfriend is a Dave, and two of my best friends, yep, they’re Daves too. In fact, there are so many Daves in my life that it would make everything so much easier if everyone was called Dave. I’d never have to struggle for a name, and I’d always be right. No more awkward “Hello…. You”s while I try to recall a name. It’d be so easy. Hi Dave!

Now imagine if I met you, and called you Dave. You gently correct me because Dave isn’t your name, but it’s funny when someone’s so certain about something that’s deeply wrong. Oh yes, I say, acknowledging it. A little while later, I call you Dave again. Now you’re confused, right? Maybe I didn’t hear you the first time. You remind me again that your name most emphatically isn’t Dave. “Don’t worry about it, Dave”, I say, confident in your Daveness. “You just… seem so much like a Dave.” Now it’s harder. Your name still isn’t Dave, and I’m still calling you Dave. This time when you tell me, it’s not funny anymore. I sigh, and tell you how difficult it is because everyone I know is Dave, and it would be so much easier if you were Dave, and have you even tried being Dave? You never know, you might like it. You don’t have to be difficult. Dave is fine. I’ll keep calling you Dave.

Pronouns – those things that go before words to refer to a person — are causing a bit of a stir at the moment, as the English language has to bend itself a little to make sure it can express human experience. That’s the way it’s meant to go, after all — language works for us, not the other way around. While those of you comfortable with he or she should absolutely feel comfortable referring to yourself thus, there are those of us who slot somewhere in between the binary. What about the singular they, which divides language lovers as surely as marmite? What about zie, or xie? What should you be expected to know? What’s right to assume?

My pronouns are the singular they/their/them, and I could write you an academic thesis on why that feels right to me — it’s comfortable, it encompasses how I see and feel about myself, and it’s an accepted grammatical convention. Not that I expect you to care about any of those reasons. In the same way that I’d like if you used my name, and didn’t just call me Dave, the same goes for my pronouns. You don’t need to worry about it – I’m going to tell you what they are, and once I’ve told you, we can move on. The same would be true if I tell you my pronouns are xe, zie, or any other that I’ve chosen to express myself with. In the same way that my name identifies me, so does a pronoun. When you ignore the possibility that I might not be a he or she, you’re confirming a lot of things I already know about the world:  that it isn’t meant for me, that it’s not safe to express myself, and that no matter how I feel, you just don’t care. When you ignore what I’ve explicitly told you, you’re saying something far worse. Now you’re dismissing who I am as a person — just like if I repeatedly Daved you.

Is it easy? No. I asked my friends and it’s taken an adjustment while they get their heads around it — many of whom have known me for longer than I’ve been transitioning, and who have been nothing but supportive as I navigate the complicated route from she to they. Do they always get it right? No, of course not. But here’s a secret you probably don’t know: I don’t always get it right either. Sometimes I slip and misgender myself, particularly when talking about my younger self. It happens, but that’s the thing about language — it’s a habit. Just like you can get used to the change in someone’s surname if they decided to change it once they’ve gotten married, you can learn a different pronoun. It shows that you care about the person you’re speaking to, and that their comfort is important to you. In a world that is increasingly hostile towards people who express their gender differently, that’s something that really matters. I’m also very very lucky – I’m in a supportive environment with the security of experience behind me. For young people who are experimenting with their pronouns and self-expression, it can be a vital way of affirming that you care about them, not about some societal code.

My pronouns aren’t a game, or a treat. An example: I was recently having an email exchange with a person, talking about gender issues. She wanted me to do something, and I wasn’t quite so sure about it. From the onset I’d established my name and pronouns, which is a habit I’ve gotten into as of late, and she’d acknowledged both. When I realised that I couldn’t do what she wanted, she snapped into mispronouning me, and when I reminded her of my pronouns, there was a suggestion that I hadn’t earned them. The message was very clear: for as long as I was willing to do what she wanted, my pronouns were to be respected. The minute I stepped out of line, however, and it was game over. Then my pronouns were going to be ignored. Unsurprisingly I didn’t do what the person wanted, and won’t work with them again.

Yes, it can be hard to get it always right, and maybe you’ll slip, but it’s time to start having conversations about this. If you get it wrong, in exactly the same way as if you forgot somebody’s name, just apologise and move on. Try, and keep trying, because the world won’t end if you do and you might find that you make a really positive difference in the life of someone who really needs it. And if you’re ever not sure, if you’re ever confused, just ask — the difference that makes, over assuming, can make somebody’s day.

For more information on the book, please follow this link.