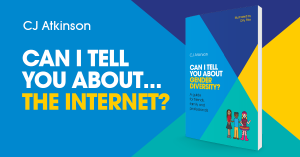 CJ Atkinson, author of ‘Can I Tell You About Gender Diversity?’, shares their thoughts on a series of important topics in the trans world. In this instalment, CJ explains why the internet is just like the pub for trans people.

My grandfather was 95 when he died and a product of his era. Born and raised in the working class north of England, he left school at 14 and worked in the mills until he retired. Not to appeal too much to Monty Python, but you could have subbed him into the Four Yorkshiremen sketch and not noticed the difference. As he got older, he got closer to understanding that things in other places were different. He started to realise that the microcosm of where he’d lived and grown up wasn’t, in fact, representative of the world and a curious thing happened. Instead of being resistant to it, he started to accept everything at face value. After all, he knew who he was, and was comfortable accepting everybody else for knowing who they were too.

Over the near-century he was alive the world had changed so much that it started to feel like perhaps he didn’t know much about anything. Which isn’t to say he lost himself – he was the most him he’d ever been, he just knew that things were different than they used to be, and that seemed to be alright. In spite of all of my differences, he was one of my best friends, and always my greatest supporter.

In the exact same way, I am, fundamentally, a product of my age. I’m part of the Myspace Generation, the first influx of Facebook users, and I absolutely have a tumblr. So it’s interesting to realise that in looking for things to “blame” for “The Transgenders” (which will be my Pretenders tribute karaoke band name), it always comes down to one main culprit: The Internet.

What we need to do is to synthesise what this means. Rather than assuming the internet spreads “propaganda” and “brainwashing”, consider it being a resource that shares “information” and “knowledge”. Not just about gender issues, but about the things that affect people who aren’t you. After all, I have no idea what it’s like to live in your body. As you read this, I have no conception of the world as you face it. The same can be said in return.

For some people, the internet is a resource through which you ask a question to get an answer. That’s not always how it works, though. Exposure (the dreaded “propaganda”) works to give an academic – if not a personal – understanding of issues. Thanks to the internet I’m a smarter person, more aware of life around me and the things I can do to accept and help other people around me. Fundamentally though, it operates in the same way that the pub used to. People talk about themselves, and you find those common threads. I never needed any help to explore my gender, I’ve been myself for as long as I could remember, but what I’ve always lacked are the words. Until I started to learn, I didn’t have the ability to express myself, and the internet – instead of telling me who I was – gave me a language that I could use to articulate myself.

It’s true; people didn’t used to talk about these things. In exactly the same way that rights for lesbian, gay and bisexual people changed to reflect an understanding of love that has existed in perpetuity, so have conversations about gender. This is what progress does. There are so many things that the world didn’t talk about, and the countless bodies of people who never survived these times. Not because they didn’t exist but because they couldn’t acknowledge their existence.

How long have trans people been around? Well, historically we know that early Paleolithic cave drawings seem to depict different genders, and the gender binary as we know it is a particularly “Western” concept. Almost every indigenous culture around the world recognises an otherness of gender, and typically values and appreciates these people. If anything, it’s taken the internet and the advances of technology to drag the West into an understanding that the world is more complicated than simply a case of ‘this’ or ‘that’. The internet is a resource, like any other. In its purest form it’s a case of chaotic neutral, where you can find what you want to find. For as long as we have young people looking for answers, and elders who refuse to acknowledge their identities, is it any wonder that the internet is the only space we call home?

To read other blog posts from CJ, please follow this link.

For more information on the book, please follow this link.