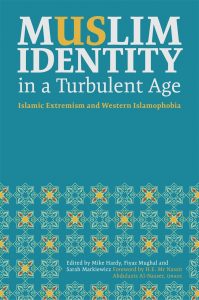 How can Islam be understood in the context of internal struggles for unity and identity, a rise in anti-Muslim hate crime and continued media portrayals of violence, extremism, warfare and oppression? Looking at Islam as a faith, a whole system with political dimensions and through the lens of Western media, this book sets out to clarify the nature of true Islam and the true nature of Islam.

“In a world in which ISIS and other terrorists are a global threat and Islamophobia has grown exponentially, Muslim Identity in a Turbulent Age will be welcomed by policymakers and the general public alike. This timely volume discusses and demonstrates the importance of The Amman Message, a major statement by hundreds of major global Muslim leaders and scholars written as a refutation and delegitimation of violent extremism and terrorism in the name of Islam.”

John L. Esposito, University Professor of Religion & International Affairs and author of The Future of Islam

Follow this link to read an extract from the Introduction to Muslim Identity in a Turbulent Age by Mike Hardy, Fiyaz Mughal and Sarah Markiewicz.

For more information and to buy the book, please follow this link.