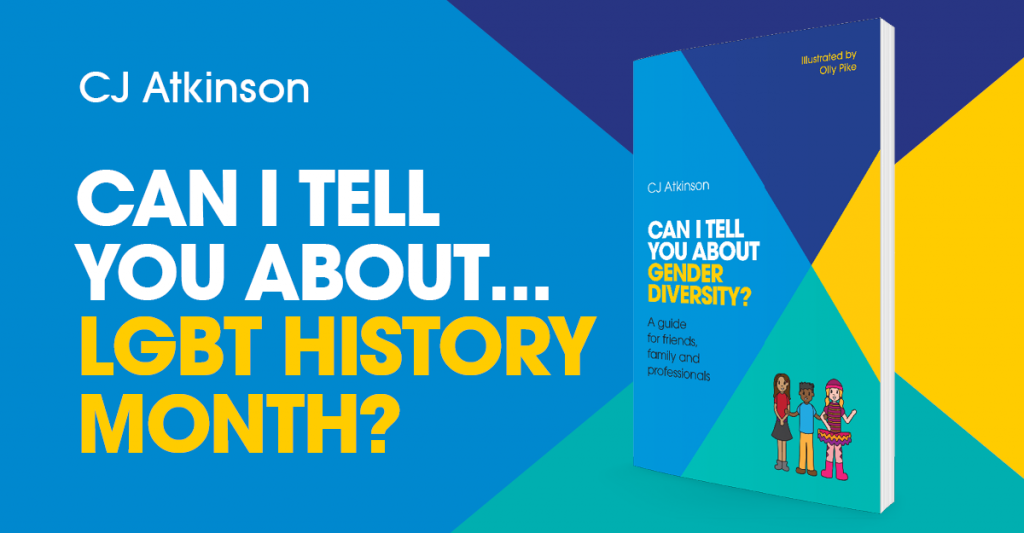 CJ Atkinson, author of ‘Can I Tell You About Gender Diversity?’, shares their thoughts on a series of important topics in the trans world. February is this year’s LGBT History Month, so we asked CJ why they thought we should take note of this annual observance.

February is LGBT history month, and for everybody who’s ever asked “What’s the point of history months?”, I’d like to indulge you in a story that might explain a little bit about what we call erasure, and a little bit more about why talking about these things is so important.

There’s this photo from the 1930s of a Nazi burning books, and it’s a photograph that I remember from my school history days. It’s so famous, in fact, that on the Wikipedia Page it’s there on the top right hand side, a Nazi watching a pile of books go up in flames. Every once in a while it appears, and it’s a familiar and horrible image that is indelibly scorched into my memory. Given the current political climate, and the conversations about Nazism that have been taking place in the world, this powerful image has occurred to me more than once. A symbol of fear, and of what fear can do to conversation. That’s the thing about a legacy – whether you lived it or not there are things that you carry with you in a sort of cultural memory.

Imagine my surprise to then learn, about a week ago, that these weren’t university books, or a general library of books being burned. Rather, they were very specific, carefully and triumphantly selected books whose loss can still be felt in the transgender community today. The books burned were from Institut für Sexualwissenschaft, the first gender clinic, opened in 1919 by Magnus Hirschfeld, a Jewish-German doctor who was an outspoken advocate for gay and transgender rights. When the Nazis seized power, this was one of the first places they ransacked – burning the books but making sure to take the list of patients, something I learned from my friend, the critic and publisher Cheryl Morgan, who then said something that I still can’t shake: Our history is always being hidden. Realising this, the careful details that have been scrubbed out of history is a startling reminder that the history we think we know isn’t necessarily the same as what happened.

Whether intentional or not, the subtext to asking why we need history months is as oppressive as the reason that we need them in the first place: it suggests that there are some people who are somehow outside of history, who only live in the present; humans who are so strange, so unusual that we cannot be found in any books, or stories. It suggests that silence – the silence that has been legislated throughout our past, which has turned our bodies into politics and made our freedoms a question of ‘debate’ – is somehow better for everybody else, and that in itself becomes some kind of truth. The act of saying something – or saying nothing – enough times makes it so.

The need for history has always been important – we use it to map out where we’re going, as much as to document where it is that we’ve been. This is what history should be: a patchwork quilt of bodies and experiences, all of which have been given the chance to be commemorated in a way that honours all of their parts. Millions of beautiful people on this earth who have lived their lives in some way considered to be ‘other than’. People who lived incredibly accomplished, difficult, brave lives; who were artists, and scientists, and heroes, and advocates, and geniuses, and were also lesbian or gay or bisexual, or transgender.

And it’s that which is the beating heart of LGBT History Month – the chance to acknowledge and pay respects to the people who lived, and breathed, and fought, and to challenge the history that would see them made invisible. And to allies who are wondering how to mark this, have these conversations. Talk about the fact that people have been people for as long as they’ve roamed this earth. Instead of looking to debate the existence of, or to ‘play devil’s advocate’ or ‘refuse to be politically correct’, ask yourself this: why is it easier to challenge the idea that types of people ever existed on earth, rather than that you may have been taught an abridged history? Then go forth, and find the answers for yourselves. They’re out there, just peeking round the corners, hidden but still very real.

To read other blog posts from CJ, please follow this link.

For more information on Can I Tell You About Gender Diversity? or to buy a copy of the book, please follow this link.