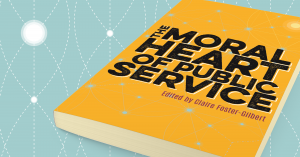 One year after Brexit, a stellar cast of eminent contributors from of politics, public service and religion explore why now more than ever, public servants must consider and reassess how to keep moral courage in public life alive in this new book of essays – ‘The Moral Heart of Public Service.’ Here, she talks to us about her motivations for writing the book.

What first motivated you to collate these essays on morality in public life?

Westminster Abbey Institute, of which I am founder-director, was established by the Dean and Chapter of Westminster to revitalise morality in public life.  We offer twice yearly programmes of lectures to this end.  We have been able to invite some really stellar speakers and to work hard ourselves to produce thoughtful and high quality lectures.  I wanted to turn those lectures into essays and produce them in a form that would last.  The Institute is meant to offer timely wisdom that is also timeless, so the book form is a good one for us.  The test is whether the essays are still relevant in ten, twenty, even fifty years’ time.

How did you go about choosing the contributors to the book?

We asked all the lecturers of the last three years if they would be willing to allow their lectures to be edited into essays and to be included.  No one turned us down.

You recently wrote a piece for the i newspaper on morality, and how it is too often considered a ‘dirty word’ in public life. Why do you think this is?

‘Morality’ is often interpreted as claiming moral superiority.  This is lethal for public servants because the media, among others, will swiftly put them right, finding any number of reasons why they can’t claim the moral high ground.  But the trouble is that any use of the word morality gets put in that pigeonhole, and that means that serious moral conversations don’t happen, and they need to.  The book promotes grown-up morality, which isn’t certain, but rather sensitive to the complex challenges that face us every day, and offers ways of thinking and acting that respond intelligently, thoughtfully and lovingly.

I think it’s fair to say that the UK currently feels very unsettled, politically and morally. What role do you hope the book will play for public servants in this uncertain time?

I hope it will be a reminder of ‘the better angels of our nature’, as Peter Hennessy says in the book, quoting Abraham Lincoln.  I meet public servants every day who are really good people trying to do a difficult job in challenging circumstances, politically and morally, as you say, and what they really need is reassurance that they should still refer to important moral values and principles, and not ditch them for expediency or utilitarian reasons.  When things are unsettled that is often what can happen, and we need our public servants to have particularly well-calibrated moral compasses and particularly strong moral courage at precisely these times.  The book is meant to help with that.

A number of the essays touch on the relationship between morality and Christian values. In your opinion, are the two inextricably linked, or can we have one without the other?

Of course we can have one without the other, as we had moral principles before Christ and we have them where Christianity is not.  But the book is inspired by a very deep sense of the love and service that Christianity inextricably is.

Do you have any words for advice for readers who are looking to rekindle their own morality in their everyday lives?

Slow down, breathe, listen to what your conscience is saying and tune into those around you and those whom you serve.  Even if others seem to be behaving badly, it isn’t acceptable to do so yourself.  We have a profoundly uncorrupt system of government in the UK and we are very lucky indeed to have it.  It is worth protecting, and that means attending to your moral health in everyday life, just as you attend to your physical health.  This is Pilates for your soul.  Make sure you aren’t slipping into lazy decision-making based upon expedience or what you think others want you to decide.  But also never trust moral certainty.  Moral sensitivity is better.

For more information and to buy the book, click here.