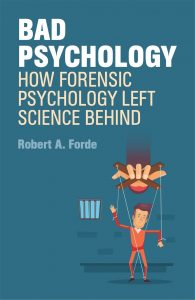 For decades, the psychological assessment and treatment of offenders has run on invalid and untested programmes. In his book, Bad Psychology, Robert A. Forde exposes the current ineffectiveness of forensic psychology that has for too long been maintained by individual and commercial vested interests, resulting in dangerous prisoners being released on parole, and low risk prisoners being denied it, wasting enormous amounts of public money. Robert A. Forde is a retired consultant forensic psychologist and prison psychologist.

How many eyes do you have?

I’m betting the answer to that question is no more than two. However, there is a traditional joke that psychologists have a “third eye” which enables them to see into people’s minds. Pretty obviously, they don’t. Perhaps less obviously, this means that they only have the same powers of observation as anyone else. Much of my recent writing in psychology has examined the implications of this simple statement.

One of the implications is that, if psychologists truly have more insight into behaviour than anyone else, this must be because of judgements that they make, not because of a basic difference in their sensory apparatus. This in turn would imply that they were less prone to the errors that other people make in their judgements. But is this true? Daniel Kahneman, the only practising psychologist to have won the Nobel Prize, won the Economics prize for showing that financial judgements were not made on the rational, mathematical basis that economists had previously assumed. Instead, they were made on a largely emotional basis, and rationality was mainly employed to justify them afterwards. There is a great deal of evidence to suggest that this is true of many other occupations, and we often recognise this in real life. For example, during the Cold War it was held by the CIA that Soviet leaders made foreign policy decisions as Russians, and justified them afterwards as Marxist-Leninists.

Kahneman has conducted many experiments on the errors in judgement that people make, and concluded that there are two phases in evaluating incoming information. The first is a quick and often inaccurate judgement about the way that information has to be handled. In particular, this decides whether or not it should be regarded as a threat. The second phase is much slower and allows for a more detailed consideration of what the response should be. Although this system allows for very fast avoidance of threatening situations, it also means that if the first phase is wrong, the second may spend a lot of time developing an inappropriate strategy. In general, people tend to defend their initial assessment, often strenuously.

The implications for psychologists, and especially for their clinical judgement, are fundamental. For one thing, we are likely to form initial impressions of people in the same way as others do (the first phase). Having done so, we have the intelligence and the jargon to construct elaborate and technically plausible justifications for our impressions (the second phase). In recent years a great deal of research has been carried out on psychological judgement. What it shows is that the professional judgements of psychologists are not necessarily superior to anyone else’s. It also shows that training and experience do not generally improve performance. It would be strange if it were otherwise: there is increasing evidence that these judgement mechanisms are based on specific brain structures, and psychologists have the same brain structures as other people. If our judgement is right, perhaps this doesn’t matter too much.

But what if it is wrong?