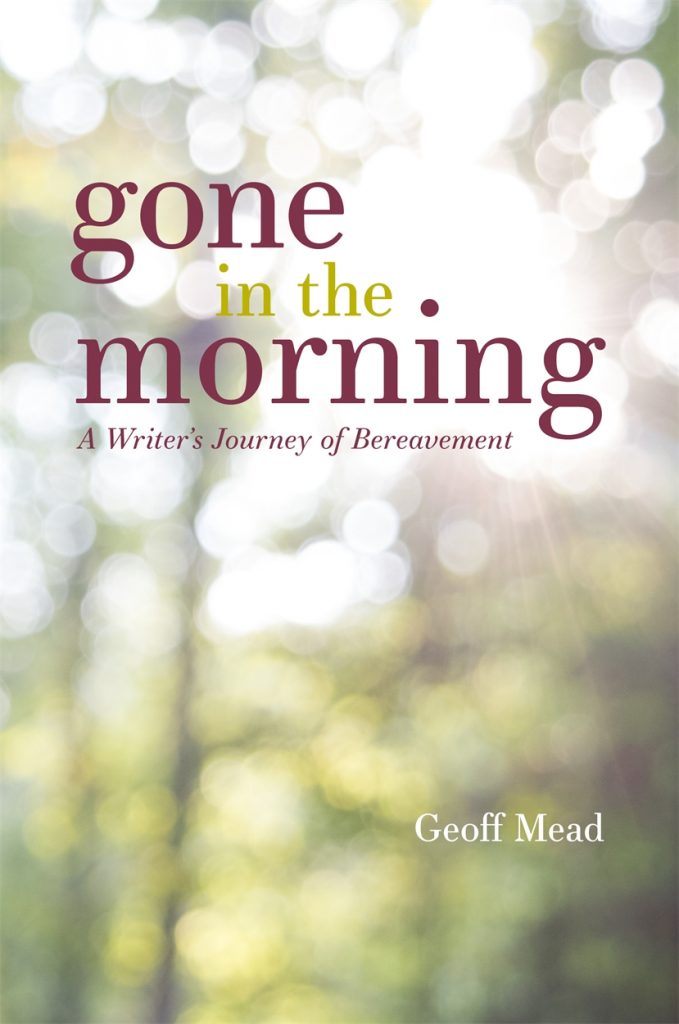 An extract from chapter 1 of Gone in the Morning: A Writer’s Journey of Bereavement by Geoff Mead.

Recently, I was having a beer with a friend. He asked me what I was writing these days and I told him that I’d written a memoir about the last 18 months of Chris’s life, about 150 blogs and a bunch of poems, mostly about grief. He gave me a quizzical look and asked a pointed question: “You are getting over this thing, aren’t you?”

He took in my reply but said nothing.

“Writing seems to help,” I added.

“Really?” he said, and changed the subject.

It was a fair challenge, and not meant unkindly. I’ve been thinking about it, off and on, ever since. Why had I been so adamant about not wanting to get over Chris’s death? What had I meant when I said that I was trying to get through it?

The other day I woke up with a realisation so blindingly obvious that it had hitherto escaped me. “Getting over it” was reminiscent of how my mother attempted to help me deal with my father’s death when I was a little boy. She loved him dearly and I know from conversations much later in life that she was heartbroken when he died. But she dealt with the situation by resolutely refusing to look back.

Whatever she was feeling herself, she acted in public as though Dad had never existed. I was not taken to his funeral and cannot recall him ever being spoken of in my presence. She remarried six years later and the few remaining photographs of my father disappeared from the walls. With the very best of intentions, she had denied me the chance to mourn his loss.

Consequently, it took me half a lifetime, some very challenging conversations, and many years of therapy, to “get over” his death. In the end we managed to rehabilitate him into our lives and I had the wonderful privilege when my mother died of interring her ashes in his grave, as she had requested.

So, I have no intention of trying to “get over” Chris’s death. Instead, I try to “get through” my grief and sense of loss by performing conscious acts of mourning. I take whatever time I need to say goodbye: at her funeral and later at the celebration of her life; by caring for her memorial stone; on my peregrination around the world with her ashes; and through my writing of memoir, stories, poetry, and blogs.

This is my way of trying to navigate the terra incognita of grief. I am as lost and as determined to come through as my mother was. Nothing can prepare you for such a loss and no-one else can tell you how to survive it.

Elizabeth Kübler-Ross described the landscape of loss in terms we can all understand: shock – denial – anger – bargaining – depression – acceptance. It is useful for anyone who has been bereaved to know this generalised pattern of reaction. It helps us to normalise the emotional roller-coaster that follows the death of a loved one and to understand that grief has many faces.

Despite this knowledge, we are strangers in a strange land, seeking our own unique ways to bear our sorrows. The ancient cartographers knew a thing or two: once we enter this unknown territory there are raging dragons waiting to pounce and fathomless whirlpools eager to drown us in depression.

The map of grief is dark and difficult to read.

Nothing is where it’s supposed to be.

Hungry for those who speak the language of the dead.

A whirlpool made of sorrow and of pain,

Ready to engulf us in self-pity.

And if these terrors should be sleeping when we pass,

There lurk the hidden reefs of memory

To breach our hulls below the waterline.

There are a thousand ways to founder in the deep.

The wreckage of the grieving and bereaved

Is strewn beneath the billow of the waves.

For those of us who navigate these dismal shores

There’s no known passage and no guarantee

That we will make it through the stricken sea.

As a writer, I try to make sense of the world through the process of writing. I have published several books, including a volume of poetry, but most of what I’ve written since Chris died was written for me. Some people keep journals, but I’m a sloppy journal-keeper. I need the presence of potential readers to exercise my craft and to keep me going.  So, even though I wrote for my own reasons, I have posted some of this writing on-line. To my surprise, I received many comments from readers encouraging me to share the account of my journey more widely because they found it moving and helpful to read when confronting their own losses and disappointments. I offer it to you now, not as an expert guide, but as a fellow-traveller doing his best to make sense of things that most of us will experience at some time in our lives.

At the time of putting pen to paper, 18 months have passed since Chris died. I am writing from within the shifting experience of grief. Shifting not in a neat linear progression from one phase to the next, but shifting nonetheless, because nothing in life stands still. The dragons and the whirlpools, the reefs and lurking horrors of the deep, catch me from time to time. But, as I am beginning to discover, there are also islands of happiness; an ocean of beautiful memories; and always the prospect of love and new life on the horizon.

I have learned much and continue to learn: I am not where I was in my life 18 months ago and, in some sense, I am not who I was then either. Bereavement shatters our identity; I knew who I was when Chris was alive but I’m having to rediscover myself in her absence. Of one thing, I am sure: only to the extent that I embrace my sorrow do I also open myself to life and love and joy.

Geoff Mead is the author of Gone in the Morning: A Writer’s Journey of Bereavement.

More books on bereavement can be found here.