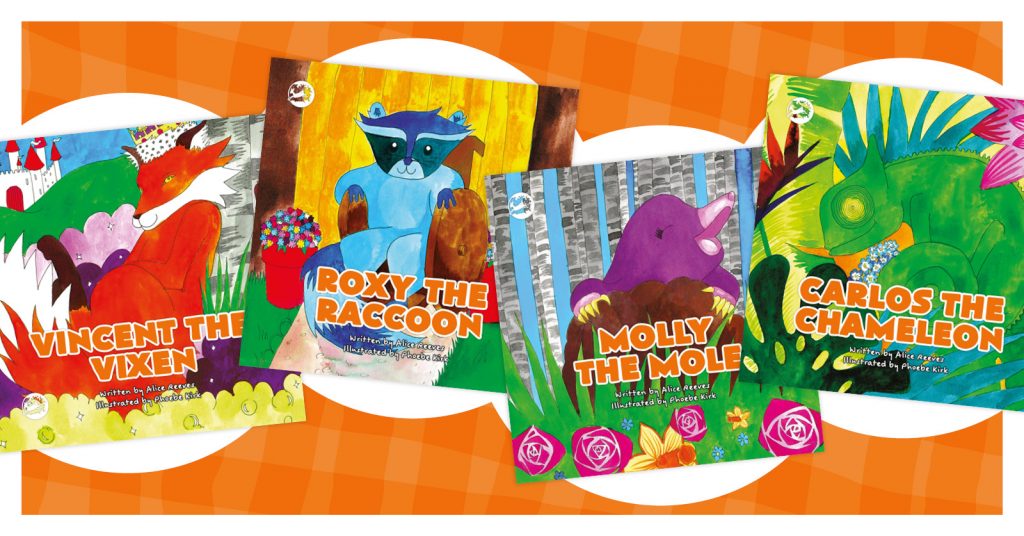 Alice Reeves and Phoebe Kirk discuss the importance of gender diverse children’s books as a way of helping them to understand that expressing our gender identity in whatever way we choose doesn’t have to be a problem in today’s society.  They are the authors of The Truth and Tails series, which aims to eliminate prejudices and encourage inclusion in young children aged 4-8.

When we’ve shared posts about our children’s book Vincent the Vixen on social media, a question we’ve been asked a few times is: “Hang on, isn’t a Vixen a female fox?”

We wanted the title of the book to spark intrigue, and give a small insight into its theme, and it’s been interesting to see that some people are more likely to assume that we’ve made a mistake than that we’re writing a book about a character that isn’t cisgender.

It sounds simple when you put it like that, doesn’t it? And it should be simple. There’s no reason why it can’t be simple. We firmly believe that everyone should have the right to express their personal identity in whatever way they choose, no matter what sex they were assigned at birth. And we believe that it’s important to work to create a society in which children feel safe enough to explore their identity in relation to their gender, or any other facet of their self-expression.

Allowing a child to express themselves however they choose, and accepting and loving them no matter what does no harm. On the contrary, it brings joy and freedom. When you look at the consequences of preventing young people from expressing themselves, of invalidating them, and of abusing them for how they choose to present, you see how harmful this can be.

The Stonewall School Report 2017 found that 64% of trans pupils have been bullied at school. Eight out of 10 young trans people have self-harmed, and almost half have attempted to kill themselves. Despite this, the survey of 3,700 pupils revealed that only two in five said that their school had communicated that transphobic bullying is wrong. It’s clear that we have a huge issue around education. At least, perhaps naively, we choose to think that the main root of any prejudice is a lack of understanding.

We don’t want to come across as ‘cis-splaining’ anything. To be clear, we are two cisgender women, and we firmly and fiercely identify as feminists and allies of the trans community. Despite this, we’ve both had our own preconceptions and misbeliefs to overcome, and we’ve been willing to take it on whenever we’ve been called out. We’ve even published a blog post about all the mistakes that we made when we first wrote Vincent’s story, and cleared it up when we’ve purported potentially harmful myths out of ignorance.

A lot of people panic about not knowing how to describe or relate to people who identify as transgender. And yet there’s no need to be fearful or defensive. If your intentions are good, it doesn’t matter that you make mistakes or hold beliefs that are outdated. What matters is taking on board the feedback from the community that your mistake has impacted, and correcting yourself gracefully and graciously.

There’s a brilliant feminist podcast called Stuff Mom Never Told You and they make a great distinction that reframes how we think about being “called out” on mistakes. Instead, they ask their listeners to think of it as being “called IN”. Someone is providing you with an opportunity to learn, to take on feedback, and to inform your opinions in a way that creates a happier and more harmonious society.

Prejudice is something that we acquire as we get older. The concept of binary genders, and the belief that our gender is directly related to the sex we were assigned at birth, is something we’re conditioned into. At the age of 3 or 4, most children are without prejudice and unashamed to be free in their self-expression. They soon lose this when they start school, because they’re told that ‘boys don’t wear this’ or ‘girls don’t do that’. The tide feels like it’s just beginning to change with movements like Let Toys be Toys and Let Clothes Be Clothes, and we’re proud to be part of driving this change in attitude.

Yet sadly, with the rise of people speaking out online about supporting trans children, and not enforcing gender stereotypes on children from the moment they’re born, there’s also been a surge in online abuse and transphobia. People have hit out at the movements pushing for change, and at charities such as Mermaids that do amazing, potentially life-saving work to support gender-diverse and transgender children and their families.

With every step forward, it can sometimes feel like we’re taking two steps back. Only this month an event was held in the House of Commons, sponsored by conservative MP David Davies, which gave a platform to anti-trans activists. Speakers at the event said that raising transgender children was tantamount to “child abuse”, and said that the internet had inspired a “trend of fashionable transgenderism”.

Seeing the amount of fear and hatred that’s still out there makes us even more determined to fight back at it. Not to meet opinionated hate with opinionated hate, but to meet it with facts and real, human stories. It’s true that there will always be bigots. We just need to speak louder, and more rationally than they do. We need to not engage with language of hate, but with the language of compassion.

To create real change in society, education must start at a young age. Diverse children’s books that prompt conversations about gender in a way that’s simple to comprehend not only help children’s understanding, but adults’ too. We’re proud to stand with fellow JKP authors Shanni Collins and Fox Fisher, as well as prominent trans celebrities like Jazz Jennings. Together, we hope that our children’s books will play a significant role in global education, and the normalisation of expressing our gender identity in whatever way we choose.

Use code TAT for a 25% discount off all four books in the Truth and Tails series when you order them from our website before the 16th April.