THE GIANT FROM NOWHERE 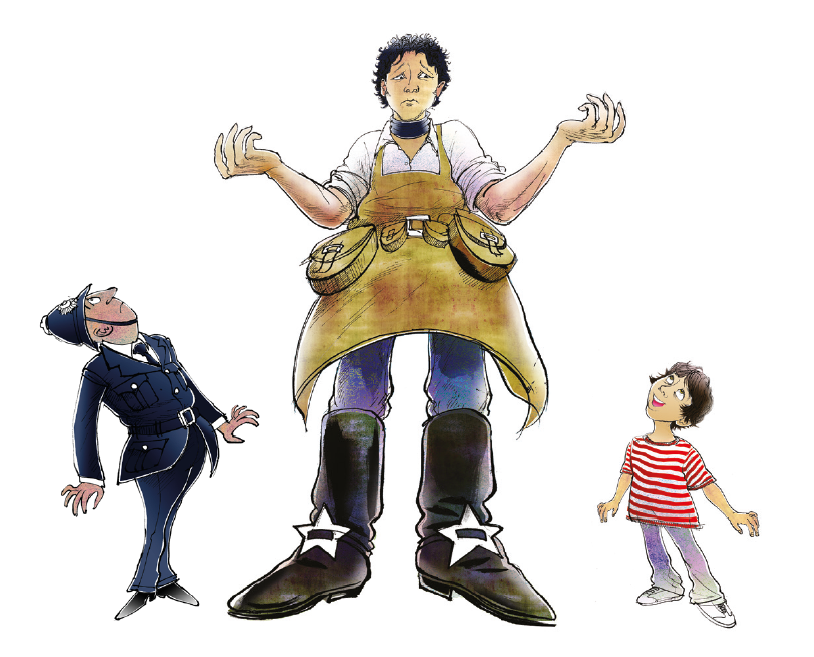 My name is Frances Dickens and I worked as a primary school teacher in an inner London school.  Many of the children I taught came from multicultural backgrounds, and some had special needs.  I wanted a resource that would promote inclusivity, help all of the children integrate and learn to appreciate their differences and value their different abilities.

So I created this resource, developing the story collaboratively with the children.  It started with an idea about a Giant who came from Nowhere and wanted to find somewhere to live.  He discovers a village called Somewhere but the unfortunate thing was all the inhabitants of the village were tiny, and he was far too big to fit in.

I took children ages 5 years to 8 years on the Giant’s journey. Through drama role-play the children became transformed because we created an imagined world, which seemed real to the children.  They wanted to be tiny villagers, reporters, police investigators, witnesses, and even giantesses.  And amazingly they accepted all the roles that I acted out, whether it was a villager, a newspaper reporter, a police investigator, a Giant and many more.  This approach made their learning enjoyable and meaningful and supported creative writing because the children had had experience of what they could write about. 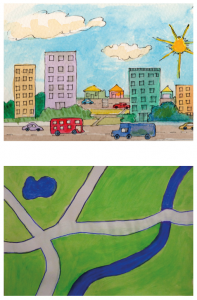 So how did the journey with the Giant start?

I explained the differences between towns and villages in order for the children to create:-

We created a 2 dimensional poster of a village.  From cut up squares on A4 sheets of paper, the children made simple fold and stand buildings, houses, shops, church, synagogue, mosque, temple, school, doctors and farms to stick on the poster on the classroom wall.

Who has walked across our village?

The children came in and saw gigantic footprints crossing their poster.  They realised they belonged to a Giant.

This Giant was looking for somewhere to live, and came across the village called “Somewhere”, the only problem was that all the village inhabitants were tiny.  How was he going to fit in?  Did he cause any damage?  If so, how did the tiny inhabitants deal with him?

What damage did he cause? 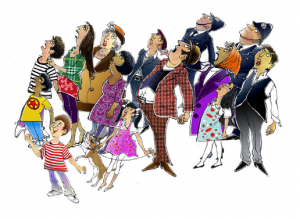 He caused a lot of damage to the village.  He got angry, he stamped his feet and roofs fell off

houses, windows were broken, furniture was in pieces.  He had to be stopped, but he walked away.

The local newspaper, “The Daily Nosepaper”

For the children to write about him in a newspaper article, the class became the village of “Somewhere”. They worked in pairs or groups of three and discussed the damage, and described this Giant. Now they had information to catch him. 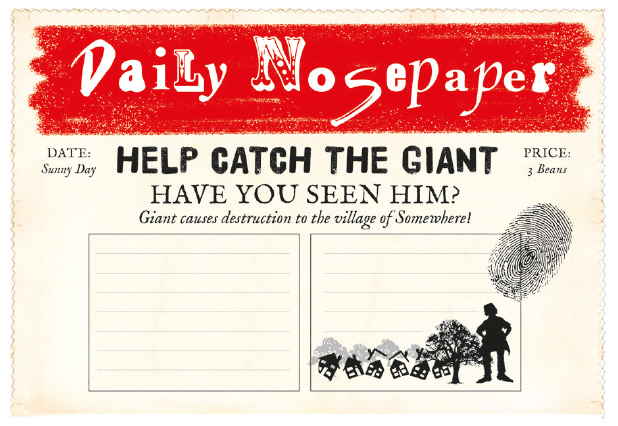 I then acted as a reporter from the local newspaper. I asked them questions about the Giant and the damage he had caused to their village. Then I split them into pairs again, in order to give them the experience of being reporters and villagers. Then they swapped roles..  Each child was then able to contribute to creating a front page for the newspaper either by their drawings or writing. The newspapers were put up in the school for all to see and the school community became involved, including the Headteacher, and the teaching assistants.

The journey had started and there was no going back.  Something had to be done about this unhappy Giant, he had to be caught.  Next time I came in as a Police Investigator, I had caught the Giant, and he was waiting outside the classroom.  Another investigation started, with the children becoming villagers and police investigators.

What is going to become of the Giant?  Will his journey end happily?

With the help of the children, ‘the villagers’, we did arrive at a positive solution. But there were a few difficult steps to overcome. What about all the damage he caused? Why is he always sad? Could it be because he is lonely? What could the villagers do to help him?

If you want to find out go on a journey with The Giant from Nowhere and don’t forget to bring the children along too.

The Giant from Nowhere

At the back of the book is a link to Jessica Kingsley Publishers website where you can find comprehensive Lesson Plans, which guide you through each step of the Giant’s journey.  Immersive role play was used throughout to stimulate children’s imaginations. Worksheets and templates for Newspapers, Questionnaires, Letters, Wedding Invitations and Lists are also included.

→ Get started with lesson plan 1 ← 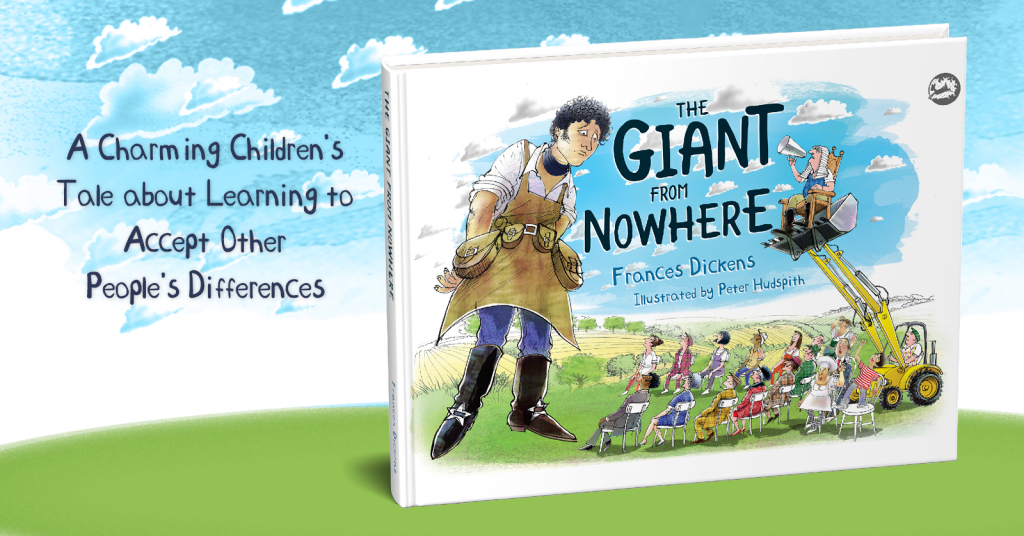 Can a Giant from Nowhere learn how to belong in the village of Somewhere, even though he’s so much bigger than everyone else? This fun and uplifting tale helps children aged 5-8 to think about inclusivity and difference. With flexible lesson plans and creative activities, it is ideal for both children and those who teach or care for them.
Buy the book…