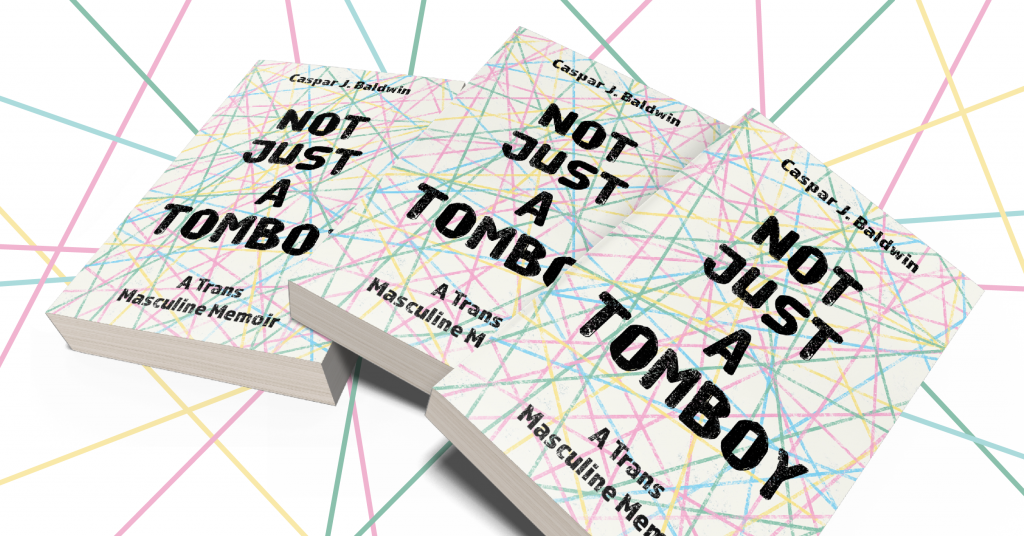 We asked Caspar Baldwin, trans author of Not Just a Tomboy, about growing up in the UK with a suppressed identity, his thoughts on the current climate for the trans community and why he thinks some people maintain that trans men are merely tomboys or ‘lost lesbians.’

Growing up in the 90s and 00s, your story is full of cultural touch-points that feel very relatable for millennial readers, such as myself. These, combined with your painfully acute observations on navigating puberty, really took me back to being an awkward pre-teen. But on top of the usual anxieties that pubescent teens have, you were also dealing with gender dysphoria (albeit unknowingly) and the knowledge that your body would soon start to betray you. What would you say to people who argue that trans children ‘don’t know themselves’ and therefore shouldn’t be able to access puberty blockers?

I would ask them how old they were when they knew who they were. I would also point out the scientific research that indicates children are perfectly capable of understanding things like gender and gender identity from very young ages. It is one of the fundamentals of personhood and so it should come as no surprise that it develops early. Most cis people, when asked to consider their own sense of self and when they ‘knew,’ come to understand this as self-evident; it’s just that at the time they were small it never registered as an experience simply because all their pieces aligned with what the world was telling them about who they were.

I think saying trans children should have blockers withheld is an act of cruelty, quite frankly. It’s borne entirely out of ignorance and prejudice. It is ignorance because it ignores the serious harm going through the wrong puberty does to a trans person: putting them at real risk of depression and suicide. It is prejudice because it frames being trans as a negative condition and a negative outcome for people to be avoided at all costs. It is also against international guidelines of best practice. I know we live in an age where people have ‘had a enough of experts’ and thus many feels embolden to position themselves as an expert on any given subject and demand their opinion is taken seriously, but, as a former academic, I for one will continue to fight for the voices of real experts to be given the proper weight they deserve.

You describe how your relationship with your older brother James changed as you grew up, from a younger sibling’s idolatry into a jealousy of all the things he could do that were denied to you. How did having an older brother impact on your identity, and do you think you’d have experienced the same frustrations had you had a sister or been an only child?

I think having a brother stopped me to a certain extent of making more of an effort to allow myself to understand the true root of my feelings. I felt embarrassed quite a lot that I wished I was known to be a boy as well as him; that I didn’t want to face the pubertal horrors that I was bound to. I was afraid if I spoke any of my feelings out loud he might use them to mock me for my jealousy in any arguments we would have; that would have been hugely difficult to deal with. I was also so afraid people, such as my parents, would simply use his being to dismiss my feelings as just wanting to emulate my big brother in the usual way a younger sibling can want to be like the older sibling.

Things would have been different if I had a sister but I’m not sure if it would have been better. I would not have had access to the clothes I preferred to wear for a start and it probably would have been harder to get away with my refusal to wear bras.

Perhaps being an only child would have been the best situation in terms of feeling like I could speak more of my feelings. Though, to be honest, there was so little acknowledgement and awareness of trans people, trans men in particular, that no matter what I probably would never have been able to figure it out at that time.

Your father has children from his first marriage, and when you were 13 he told you that one of them was ‘a transsexual and was now transitioning to a woman’. What did this mean to you at that age and did it impact how you understood your own identity?

I remember it being quite shocking to the family, but also making a lot of sense to me about who she was and why she behaved the way she did. Though, for my own identity, I think it drove it further underground and away from my consciousness. As I write in the book, there was a sense of disgust from a number of my immediate family surrounding her transition and the idea of transition that I was left with the feeling it was very negatively viewed by the world. This, and the absolute lack of concept I had for the existence of trans men, meant I did not get any closer to understanding and accepting my own identity from this awareness of having a trans sister.

When coming out to your parents, you were met with their ‘religious objections.’ How was that for you? Do you have any advice for other trans people who are considering coming out to friends and family?

It was difficult but I knew it was coming. I also knew that despite them, they wouldn’t throw me out of the house or excommunicate me, which was vital knowledge. It was simply the barrier between them tolerating and fully accepting. I had to fight for myself against their ignorance and the messages they had been taught from the interpretation of Christianity that they follow. Thankfully, I’ve never had to consider it to be an insurmountable task.

My advice would be to recognise that you deserve to be happy and you deserve to be yourself. You also have to trust that their love for you will override any of the hate they may have been taught, and if it does not then they don’t deserve you. This is perhaps the hardest lesson of all for trans people: you only get one life and you deserve to live it happily and fully. Don’t waste your precious time in a state of misery just to please someone else.

I would also say, don’t try to bombard them and cajole them to acceptance. Give them information but do not give in to the urge to hurry them up because that just serves to make them more defensive. Carry on living your best life and let them know you are available to help them but otherwise let them work through their feelings in their own way and in their own time. Then, if they come to acceptance, you know it is true.

You note in your book that there’s a worrying emergent theory that trans men and boys are merely ‘lost lesbians.’ What would you say to someone who holds this opinion?

I think it is because they have been conditioned to believe that all trans men are simply lesbians who have been coerced into the ‘dark side’ by evil trans activists lurking amongst social media platforms. This is the theory being pushed by the fake feminists in certain corners of twitter and forums like Mumsnet. They believe trans people are homophobic and are pushing the message that it is better to transition to be a man than to be a butch lesbian and they postulate that trans people wish to erase butch lesbians. I’m not sure what has fuelled this particular ‘hot take’ but I imagine they have witnessed some apparent lesbians coming out as trans men and extrapolated from there, weaving in a few of their personal prejudices for good measure as they went.

In reality, trans men, like all types of people, exist across the sexuality spectrum. I happen to be gay. I also happen to be one of many gay trans men I know, largely because I have sought others out. There is a failure in many people, particularly in the ones I mention above, to understand that sexuality is separate to gender identity and thus, knowing someone’s gender identity tells you nothing about their sexuality. So you shouldn’t be at all surprised to learn the sexuality of a trans person, whatever it may be.

Could you explain why you chose the name Caspar?

Naming is a very difficult thing for a lot of people; you only have to read ‘The Naming of Cats’ by T.S. Elliot to work that one out!  There are so many names and so many that you may end up really liking, I honestly don’t know how parents narrow it down. My previous, or dead name, was very common and I had always been one of several in my classes, so I wanted one that was different. I also wanted one slightly old fashioned and interesting. There were a lot of candidates, some of which I dismissed simply because I didn’t think I could carry them off. Eventually, I just grew to love the name ‘Caspar’ the most and in the end, as an act of full acceptance and slightly because I’m a tad eccentric, I made use of a Kellogg’s promotion to have it engraved on a teaspoon.

What have you been doing since you finished writing Not Just a Tomboy?

I have just continued to recover from surgery and make plans for the future. I have also joined the committee of Northumberland Pride as the Trans Engagement Lead. We have many exciting things planned for trans people and trans awareness in Northumberland.

Follow this link for more information on Not Just a Tomboy – available from the 21st November.