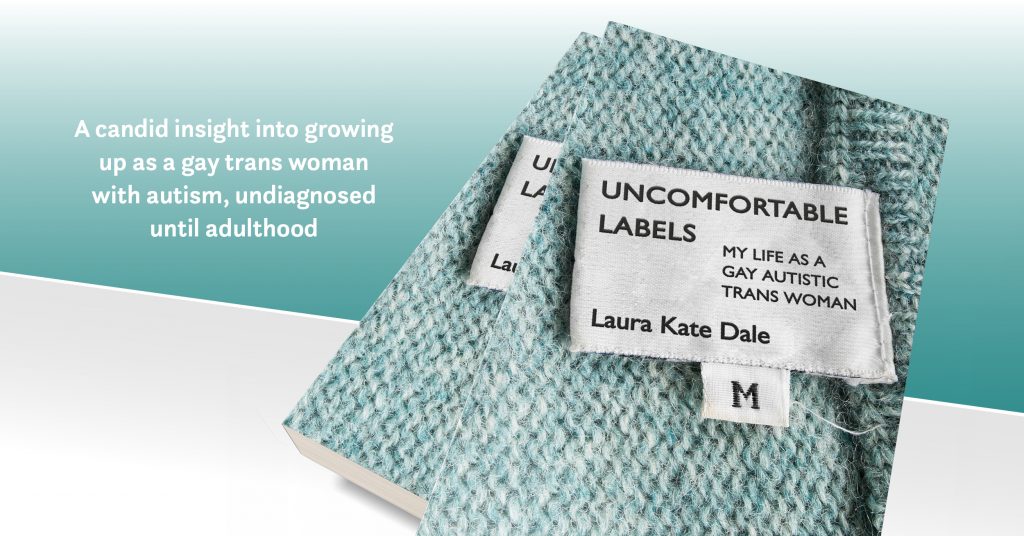 How the process of writing her first memoir lead Laura Dale to reconsider her assumptions about the intersection of her own identities of trans and autistic.

When I first started writing the publisher pitch for the book that would become Uncomfortable Labels, it was structurally much the same book it is now. It was always planned to be a memoir style book chronicling my life through the lens of intersectional identity, and many of the stories and touch points I had planned on from day one made it into the final book.

However, something pretty big did change early on in the early writing process, that I believe largely improved the end resulting book, and made it what it is today as we approach release. I found out I wasn’t as alone as I assumed, and I carried that sense of hopeful community to the final draft text.

When I started pitching Uncomfortable Labels to JKP, I knew that I was trans, and on the autism spectrum. I knew that I faced unique challenges living at that intersection, and I hoped that my story might help a small net of people who could relate to my situation.

I knew that statistically 1% of the general population are on the autism spectrum, and roughly 0.3% of people are trans, but I assumed the overlap would be miniscule and rare. It wasn’t until I started working on some draft text for the book, and preparing proper research notes, that I learned just how wrong I was.

Around 8-10% of people on the autism spectrum are trans, and vice versa, a statistically high overlap that I honestly never knew about before starting work on the book. Because the medical system and support groups never brought up the connection or high rate of overlap, I grew up feeling alone and like my struggles were perhaps mine alone. That idea that I wasn’t alone gave me hope.

With that in mind, the way I thought about the book very much began to change. I was no longer writing this book just for myself, but I felt like I had to write it for everyone else out there like me, who had grown up feeling like they were alone at a difficult crossroads.

I realised that by talking about how common the overlap is, I could make space to break down some misconceptions about people like myself. I could start to tackle incorrect beliefs about trans people who don’t pass simply not trying enough, I could talk about how diagnostic tools often fail trans women on the autism spectrum, and I could make a larger point about how we need to start a conversation about the unique situations that arise when you’re both trans and autistic.

For example, I really struggle with the sensation of a razor against my skin due to sensory issues, so I struggle to get my face clean shaven enough to avoid stubble or 5pm shadow. I struggle wearing makeup due to sensory issues, which only compounds my shaving issues. I struggled to watch and imitate more feminine coded physical mannerisms due to my struggles processing other people’s non verbal actions, and I struggled to engage with the LGBT community due to a lack of venues and events that avoid loud music and flashing lights.

I am far from alone in dealing with these combined struggles.

Obviously, my book can only tell my story. I can’t speak for every trans person, every person on the autism spectrum, or everyone at this intersection. There will be things in this book which won’t resonate personally for some people who share my identities.

All I can do is tell my story, and do my best to improve understanding. I hope my book starts some overdue conversations. But, if nothing else, I hope out there somewhere is a person who reads my story, and feels a little less alone the way I did when I started researching to tell my story.

Uncomfortable Labels is out on the 18th July and available to pre-order here.