Elizabeth Nassem is the founder of Bullied Voices, a consultancy which provides research-informed anti-bullying strategies in education establishments and workplaces.
Here on the JKP Blog, Nassem gives us a little more insight on her recently published book, ‘The Teacher’s Guide to Resolving School Bullying’: 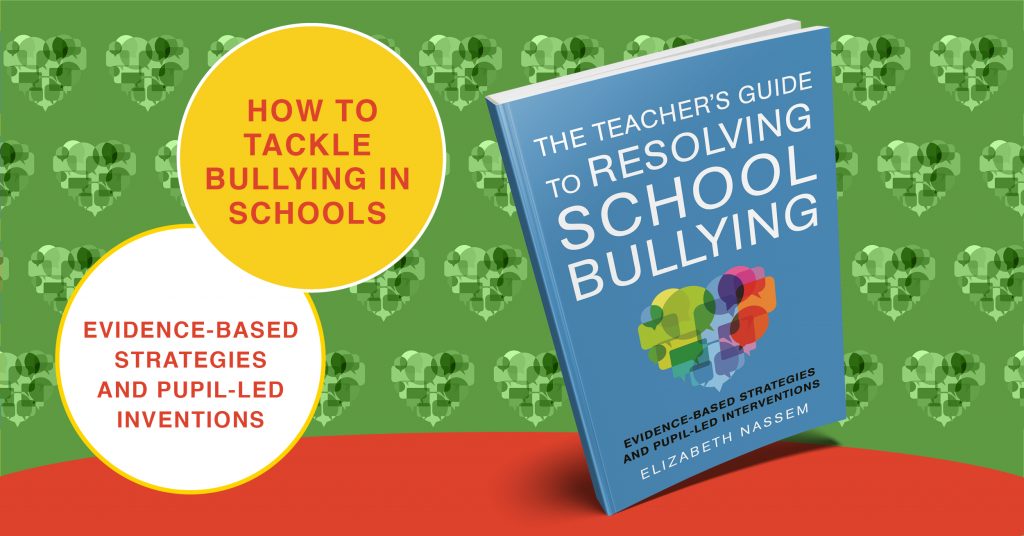 Why did you want to write the book?

In my research I have found that many children are bullied on a daily basis in school and feel that bullying is normal; and to some extent acceptable.  Children also experience bullying in more complex ways than is usually taken into account of in most books about bullying.  Persistent conflict between pupils, and the hostilities and tensions which can arise between pupils and teachers are not usually adequately addressed in most books which aim to tackle bullying.

Although schools have a legal duty to address bullying, teachers don’t always have the adequate support or training to make the bullying stop; particularly in more complex cases. There is also a substantial difference between how bullying is commonly understood by most researchers and how children actually experience bullying.  Although most researchers aim to clearly distinguish whether children are being bullied or not, most children experience different severities of bullying, ranging from mild to severe and there are many ‘grey’ areas which need to be addressed.  This has inspired me to write ‘The Teacher’s Guide to Resolving Bullying: Evidence-Based Strategies and Pupil-Led Interventions.’

My book includes practical and accessible techniques to support teachers to effectively resolve bullying. There are strategies which show teachers how they can listen to children about their experiences of bullying and learn from these so their bullying can be effectively resolved, even in challenging cases.  School strategies for tackling bullying, in most cases, do not stop bullying because they do not deal with the underlying reasons why children engage in bullying, or teach children how to behave respectfully.  In my book, readers will learn why children engage in bullying so they can develop effective strategies to deal with these issues.  I also want to show teachers how they can tailor their interventions to resolve children’s specific experiences of bullying.

What is your background/experience in the area?

I have researched bullying for over ten years and have been developing interventions in schools since 2014.  I have a doctorate in school bullying where I examined where bullying exists in children’s everyday experiences of school.  All my interventions are based upon my research into how children experience bullying, and are based on my post-doctoral research where I have developed pupil-led interventions. I am a trained and experienced teacher who has taught in primary and secondary schools so I know what it is like to deal with bullying as a busy school practitioner.  I was bullied as a child and can empathise with the children I have worked with.  Currently, I am a consultant in school bullying who supports teachers to develop interventions to resolve bullying through harnessing the voices of pupils.  My research has been published in journal articles, and my research and interventions have featured in the national media such as The Telegraph and The Guardian.

In your opinion, what do schools do right and what do they do wrong when it comes to dealing with bullying?

Most schools now recognise that they have bullying and some acknowledge that bullying is a serious problem.  Schools have policies and practices to address bullying and many campaigns against bullying such as in anti-bullying week.  Many schools try to raise awareness of bullying such as through teachers providing assemblies and displaying anti-bullying posters.  The anti-bullying campaigns schools often use are not always tailored enough to address children’s specific experiences of bullying. Children might actively campaign against bullying whilst their own problems with bullying are not sufficiently addressed. It is vitally important that children are fully engaged in anti-bullying campaigns.  Children can be involved in designing and delivering campaigns in order to adequately address their specific experiences of bullying.

Some schools might try to address the more obvious cases of bullying such as when a group of children are overtly violent against another child.  However, they do not always deal effectively with milder cases of bullying where early intervention could prevent it from escalating, or more complex cases of bullying such as bullying between friends.  Furthermore, schools might address bullying through means of punishment such as giving detentions to children who engage in bullying or putting them in isolation. This makes the punished children angrier so the bullying continues and, in most cases, worsens.  Schools would benefit from spending more time listening to children’s experiences of bullying, and from this developing effective interventions.  There is so much to be learned about bullying directly from the children themselves.  Facilitating and analysing interviews with children about how they experience bullying and how they think bullying should be resolved can dramatically improve how teachers and schools respond to bullying.

What have you learnt from your research featured in your book?

Bullying is of paramount importance to most children, but they usually feel it is not taken seriously enough in school.  Pupils are not satisfied with many of the interventions currently being used, such as assemblies led by teachers where children are not necessarily engaged in the message and anti-bullying posters on the wall which most children don’t read.  I have developed an anti-bullying assembly with children who had behavioural problems who engaged in bullying. The children who led the assembly were in year ten and they presented their work to pupils who were in year seven.  The children helped design the assembly and decided what they wanted to say.  One girl, named Chloe, said in the assembly, ‘I used to be in trouble for bullying but I do not want to bully anyone now.  Bullying is awful, it makes people feel sad and ruins their lives’.  Chloe had the courage to stand up and announce that she had learned how harmful her bullying was and that she wanted to improve.  Instead of engaging in bullying she was a role-model to other pupils.  I hope that she showed other pupils how they can gain status from their peers by helping help those who are bullied rather than engaging in bullying.