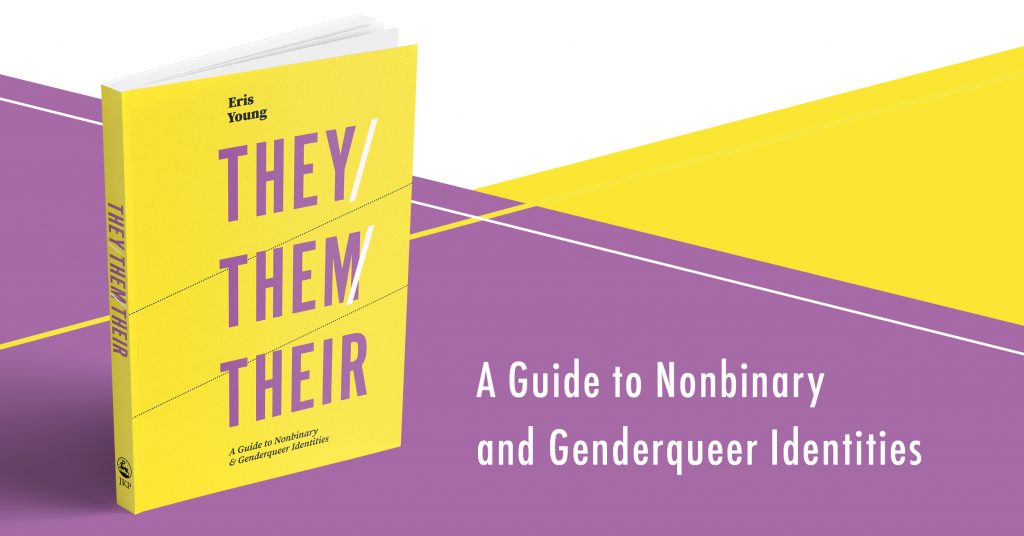 Eris Young reflects on how their identity sets them apart from a cis-hetero society, and how this identity can inform their writing of queer identities.

I’ve just booked my first ever festival appearance for early next year (yay!), and the rough panel proposal that the organisers have pitched to me is a discussion – alongside a couple of other queer authors – of writing queer identities.

Identity is of necessity something I’ve had to explore and engage with on a personal level ever since I came out almost ten years ago. But though the assertion of my own identity as a queer and transgender person is integral to my sense of self, my work and my interactions with other people, it’s quite hard for me to pin down what identity actually is. And it wasn’t until I wrote They/Them/Their that I really had the chance to learn what my identity means for other people in my community.

My identity as a queer person is defined in terms of the ways in which it differentiates me from the majority of people, the ways in which it gets me marginalised, and the ways I share it with other queer people. When I write queer identity, it gets even more complicated: I could be writing about myself, or someone else in the genderqueer community whose experiences of that identity are different from my own. If I’m writing fiction, I could be writing about a person who lived long ago or even someone who could never have existed, someone living in a fantasy world or on a different planet.

One of the most important things I’ve learned while writing They/Them/Their – the fundamental “lesson” of the book, a lesson I didn’t realise I’d learn before I began writing – is that what we (me, my consultants, most of my readers) were raised to think of as “gender” is a whole lot more fluid, blurry, flexible and ephemeral than is commonly accepted. Any given model of gender, no matter how entrenched or pervasive, is influenced heavily by the social, economic and political forces at play at the time. Gender is temporary – at least, our version of it is, because it was “invented” fairly recently. This means the gender identity categories we use now didn’t exist – or more accurately weren’t always delineated or assigned in the same way that they are now. Throughout the world, in pretty much every culture, people see, define, model and express gender in different ways. And people are assigned marginalised identities – even ones that seem analogous to our LGBTQ categories – based on very different criteria.

So what is it that makes the identities I’m interested in writing queer? What is it that unites these experiences – real or fictional – and how can I, a Western, millenial queer person, write about them without experiencing their nuances for myself?

This question, or some form of it, is one any writer needs to answer for themself, when it comes to writing about the experiences of real people different from themselves. My educational background is in linguistics and anthropology – two fields which, at least in the Western anglophone tradition, have histories rife with imperialism, abuse and betrayal of trust. Since their establishment as disciplines, there have been instances of evidence gathered during linguistic or anthropological fieldwork – with subject and observer usually being on two sides of a racial, cultural or class divide – being used to justify the biases or bigotries of whoever is funding the research.

Obviously fieldwork doesn’t always have this effect, but it’s a dark part of the history of my fields of study that I’ve been mulling over for years. And it affects my practice as a writer as well. Even when writing about people in my own community – the nonbinary trans community – I try to be careful to represent people as they are, to not let my own biases affect my portrayal of their experiences, and not try to find parallels where there are none.

When I write queer identities, the bigger questions I have to think about are, How is queer identity united across time and space? and, How can I claim solidarity or affinity with people whose entire lives look different from my own? I don’t think I’ll ever have fully satisfactory answers to these questions, but I have a few reliable ways of grounding my practice.

The first and simplest is research! I’m not an academic but I do have an academic background. Research is something I know I can always turn to when I’m feeling lost, and I find it really rewarding to learn about global and historical sexual minorities, to hear the stories of these people and empathise with them. Writers are already (or need to be) keen observers of humanity and the world around them. So I see research – reading, interviews, observation and note-taking – as a formalisation of what I’m already supposed to be doing, a kind of due diligence.

And in doing that due diligence, I’m able to dig deep into queer ways of living, and ensure that my work as a writer is grounded in my own gut feelings of affinity and empathy for queer people, wherever I encounter them. The aspects of my own identity that are most pertinent are things like my feeling of otherness when interacting with the straight, cis community, the ways that sometimes all of society seems to have been constructed to exclude me – and how, when I demand a place for myself and refuse to apologise for the way I am, it feels like I’m fighting back. My experience of being “betwixt-and-between” the two popularly constructed ideas of “man” and “woman”: neither one suits me wholly, and when I’m most comfortable I find myself able to pick and choose bits of gender expression – clothing, mannerism, speech – that I like, and reject the rest.

So when I read the story of Marie Germain – a renaissance-era shepherdess who was said to have leapt a ditch on a hot day and landed with such force that she spontaneously grew a penis and lived the rest of her life as a man – I wonder how would it have felt to have undergone such a change? Would it have been a radical adjustment, an existential crisis? Or would life have gone on as normal? When 16th century Spanish surgeon Eleno/a de Cespedes was put on trial and found to have lived as both a man and a woman, they were allowed to continue practicing medicine, but in womens’ clothing – an ironic subversion of the law that forbade women from becoming surgeons. Would this have felt like freedom, or punishment?

When I write queer characters, or people who identify as queer or who have been put in “queer” categories without their consent, I do it with an understanding of what it’s like to be the “other”, to exist outside of the establishment and to have nothing that is made for you except what you make for yourself. This empathy is what lets me feel comfortable, not claiming all queer people’s experiences for my own, but standing alongside them, building on the shared experiences that unite us and celebrating what makes us each unique.

They/Them/Their is out now.

Do you know about our Gender Diversity Facebook Group? Join here for updates on new books and exclusive content from our authors.