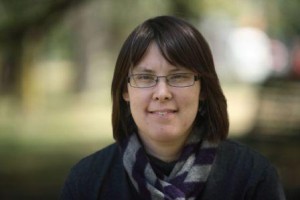 Jeanette Purkis is a successful artist and business owner who has Asperger Syndrome. Jeanette recently featured in a documentary entitled “Alone in a Crowded Room” which seeks to answer the question: What happens to autistic children when they grow up?

When I was in my twenties I was a very different person to who I am today: I was a prisoner, a criminal and a drug user, a disturbed, inconsequential waif who wandered through life offering joints to passers-by and wondering why this was frowned upon. My twenty-something self was at home in prison in the company of women that my thirty-something, respectable self would not dare to even look at. I was diagnosed with Asperger syndrome in prison and hated and rejected the diagnosis as it seemed to me to be a diagnosis of ‘geek.’

At twenty-five, I decided to say farewell to the life of crime, drugs and having little control and even less desire for it. On 5th February 2000, I was released from lawful custody. At this point, as far as I was concerned, empathy was something that other people practiced and ethics was a foreign concept. However, around early January I’d decided that a new millennium should mean a new life and was determined to avoid returning to prison, but I had little idea of how a positive life could be achieved.

I was lucky enough to have gained a misdiagnosis of borderline personality disorder somewhere along the line and this lead to my attending a live-in therapy program for people with that condition. While misdiagnoses are usually not the best recipe for recovery, in my case it was actually a bit of a blessing, for the course was filled with rules and structure, and every time I did something well I was rewarded. The staff at the program seemed to trust me and, after six months I left, filled with new-found self-esteem and confidence and wanting to succeed in life.

I spent the next few years doing the supposedly impossible – through logical deduction and intellect I learned empathy and I learned ethics. Far from feeling alienated by society, I wanted to make the most of life and give something back to the world that I had taken so much from. I lived in terror of meeting former criminal acquaintances – I would cross the street if I saw someone who looked remotely familiar and a little bit dodgy. In fact, I bade farewell to all my friends – I was quite lonely for some time, but I was a lonely, ethical and drug-free person who had some ambition for the future.

I changed my entire outlook on life, overcompensating a little by being conspicuously honest and avoiding any situations which may lead to difficulties of a legal or ethical nature. I lived in a variety of accommodation over the years: a group house for people with mental illness, which taught me about tolerance and patience; a two bedroom flat by myself, which taught me about self-reliance and appreciation for my own company; and a one-bedroom flat in a huge block owned by the Office of Housing (similar to an English council flat), which taught me that poverty is not an edifying state to be in.

I attended university for six years, graduating from Bachelors to Honours and then achieving a Master of Fine Arts, loving the intellectual rigour and appreciating how far I’d come in a few short years. I became known in the Melbourne contemporary art scene and had many exhibitions, including one at the prestigious Australian Centre for Contemporary Art. I wrote a book about my experiences at the age of 30, which drew a great deal of comment from older people who were amazed that a person that young had enough experience to write an autobiography.

At the end of my Masters degree, I started work as a civil servant and moved to the Australian capital, Canberra, thus escaping poverty and starting on the path towards financial independence. Eighteen months later, I bought my own one bedroom flat, where I was surrounded (mainly) by other civil servants also living in their first property purchase, rather than drunk unemployed people as had been the case in the Office of Housing flat.

And along the way I gained many good friends and won back the respect of my family. When I was young, I had no self-esteem and figured the difficulties my Asperger’s caused made it impossible for me to achieve anything. I gave up on myself and the world. Now that I am older, I realise that Asperger’s is probably the main reason that I have been able to achieve so much. I have little or no emotional memory, meaning that I can ‘move on’ after horrific past experiences; I am focused and determined, almost to the point of obsession – if I want something, that something generally happens; I am organised and thorough, meaning that life at university and particularly in the civil service, is easier for me than for many other people; and I have a rigorous intellect, which means I can understand social situations using logic, as I taught myself ethics by applying how others’ actions would make me feel and turning it back on other people.

While Asperger’s can cause a person difficulties, it also comes with many amazing gifts which in my case have certainly helped to set me up for a wonderful and successful future.