Child and family psychologist and JKP author of the bestselling A Short Introduction to Attachment and Attachment Disorder, Colby Pearce, on maintaining a balanced view when caring for children who have experienced trauma in their early lives.
This article first appeared on The Adoption Social‘s guest blog.

I was born in January, which is the height of summer here in Adelaide, Australia. As such, I have always thought of myself as a “summer baby” and considered that this is why I enjoy the warmer months as opposed to the cooler months. I have a lifelong aversion to feeling cold and for many, many years I felt below my best during winter. I have questioned many people about this and have discovered that most people prefer either the warmer months or the cooler months. Many of them are just not happy until their preferred season returns.

About three years ago, and with the emergence of joint aches and pains during the colder months, I had the thought that it was a bit of nonsense really to consider myself a “summer baby” and defer happiness until it was warm again. I have always been a keen gardener and have a large hills garden. Looking after my garden is an act of looking after my self. Water is an issue as it is scarce and expensive, my garden is large and summer is hot (As I write this it is the fifth consecutive day of over 40C). So, I bought some rainwater tanks and now I pray for as much ‘bad’ weather as possible during the cooler months. I check the weather radar each day and feel let down if forecast wet and wintry weather blows south or north. I still have my aches and pains and look forward to the warmer months when they trouble me less, but I also look forward to cooler, wetter months now as it is a boon for my efforts to maintain a magnificent garden. And the garden? Well, with the additional water supply it has never looked better. 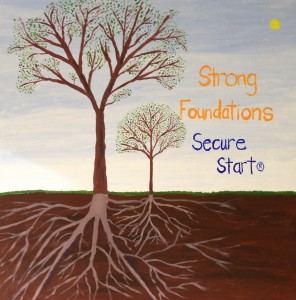 What has all this got to do with looking after children; particularly those children who experienced significant adversity in the first days, weeks, months and years of their precious lives? Well, it has to do with how we perceive them and the effects of this; both in terms of our own experience of caring for them and their experience of being cared for by us.
I am particularly interested in the idea of “self-­fulfilling ­prophecies”. In Psychology, these take the following form. I have a thought. My thought induces an emotion. My emotion activates a behavioural response. My behavioural response precipitates a reaction in others. The reaction of others often confirms my original thought.

Let’s try one. Thought: “nobody loves me”. A common feeling associated with this thought: hostility. Common behavioural responses to feelings of hostility: withdrawal and/or aggression. A common reaction to withdrawal and aggression: admonishments. An inevitable result: confirmation of the original thought.
Lets try another. He is damaged by his early experiences. I feel badly for him. I try to heal him. He keeps pushing me away. He is obviously damaged.
And, another: He is such a good artist. I am so proud of him. I support and encourage his interest in art. His skills develop and he is often affirmed for his artistic achievements. He is such a good artist!

Children who have experienced significant adversity at the beginning of their life are commonly referred to as “traumatised”. There is much literature about how early trauma impacts the developing child, including their acquisition of skills and abilities, their emotions, their relationships with others and even their brain. This literature focuses on the damage early trauma does and there is a risk that we, their caregivers, see these children as damaged.

The idea of the looking-­glass ­self (Cooley, 1902), whereby a person’s self-­concept is tied to their experience of how others view them, has pervaded my life and my practice since I stumbled across the concept as a university student. Empirical studies have shown that the self-­concept of children, in particular, is shaped by their experience of how others view them. In my work, this has created a tension between acknowledging the ill ­effects of early trauma and encouraging a more helpful focus among those who interact with so ­called ‘traumatised children’ in a caregiving role.

I am just as fallible as the next person, and I do not have all the answers. But as a professional who interacts with these children and their caregivers on a daily basis I strive to find a balance between acknowledging and addressing the ill­effects of early trauma and promoting a more helpful perception of these children. I strive to present opportunities to these children for them to experience themselves as good, lovable and capable; to experience me and other adults in their lives as interested in them, as caring towards them and as delighting in their company; as well as experiences that the world is a safe place where their needs are satisfied. I strive to enhance their experience of living and relating, rather than dwelling on repairing the damage that was done to them.

Most of all, I see precious little humans whose potential is still yet to be discovered. 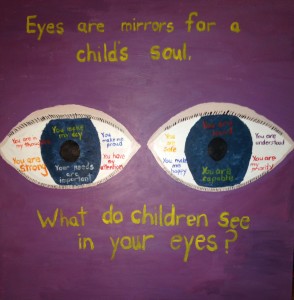 Eyes are mirrors for a child’s soul. What do children see in your eyes?

Prepared for The Adoption Social by Colby Pearce (Clinical Psychologist and Author), ©2014
You can read the original blog post here.
You can keep up with Colby’s blog posts on his website, here.
You can also follow him on Twitter @colbypearce