Shibley Rahman completed his PhD in frontotemporal dementia at Cambridge University, commencing a lifelong interest in the timely diagnosis of dementia. In this article he explores some of the work being done to reduce reliance on medication and increase our understanding and use of non-pharmacological interventions; looking to the future of dementia care.
You can learn about Shibley’s book, Living Better with Dementia, here

Currently, Alzheimer’s Disease International estimate that there are 47 million people around the world living with dementia. Whilst the policy planks of ‘prevention’ and ‘cure’ continue to attract attention, there is concern amongst many that the people trying to live better with dementia don’t get caught behind. 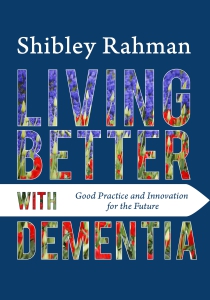 There’s been a concerted effort to look at the cost of drugs in the NHS in recent times. ‘Innovative drugs’ have been a big deal in the service, and it is reported that new innovative drugs approved by NICE between 1999 and 2004 added £800m a year to the UK drugs bill.

Irrespective of the cost of the drugs budget in England, one is right to query whether patients are being given the appropriate treatment based on the current best practice. A temptation of a medical doctor to prescribe a ‘magic bullet’ can easily explain away the ‘over-medicalisation of illness’, leading the Academy of Royal Colleges justifiably to take action earlier this year.

There are probably over 400,000 older people living in care homes, and possibly dementia ‘affects 80% of care home residents‘. With the scale of statistics, one is bound to be concerned at the potential volume of inappropriate antipsychotics scripts for people living with dementia. Prof Sube Banerjee helpfully reported on this issue in 2009 for the Minister of Care Services at the time.

Every chemical medication has its side effects. I am always impressed with the ease at which the pharmaceutical industry is able to market their drugs, given that there are 1000 billion nerve cells in the human brain all connected with one another directly or indirectly in various ways.

With so many different functions of the human brain, such as memory, attention, perception, language or planning, to name but a few, it has been a difficult task to work out which particular ‘hubs’ involving parts of the brain are particularly involved in certain functions.

The exact characterisation of wellbeing in dementia remains an active area of discussion. For example, five psychological needs had been described by Tom Kitwood – comfort, attachment, inclusion, occupation and identity. Identity itself has been subject to volumes of work, some empirical, but apparently the need for identity ‘involves maintaining a sense of continuity with the past, and some kind of consistency in the present life’ (Kitwood, 1997, p. 20).

In my book Living Better with Dementia: Good Practice and Innovation for the Future, identity is a really big deal. I suggest a possible way in which the human brain might be able to reactivate “sporting memories” from his or her own past. I also describe the powerful effect that music can have on the wellbeing of a person living with dementia.

Also, pervasive to my entire argument is that dementia should be recognised as a disability under the Equality Act (2010) and the United Nations Convention on Rights of People with Disabilities. This takes the argument one towards ‘rights based approaches’, imbuing potentially a ‘rights consciousness’ of what all people are entitled to. When you consider that people receiving a diagnosis of dementia can find the whole experience totally disempowering, as described clearly by Kate Swaffer in her groundbreaking work, the idea that some form of reablement or rehabilitation is incredibly powerful.

The human brain is uniquely baffling. According to Professor Nancy C. Andreasan, “When the psychologist Kay Redfield Jamison looked at 47 famous writers and artists in Great Britain, she found that more than 38 percent had been treated for a mood disorder.”

Some people when they develop a dementia acquire novel artistic talents. How this happens is still a mystery, but it gives a whole new dimension to the term ‘living better with dementia’.

Also, a few months ago, I was asked to introduce by Lucy Frost, a specialist nurse in dementia, a film in a small church in Brighton, England. This film called Alive Inside was a brilliant demonstration of how people living in residential homes would get ‘switched on’ by listening to music from a portable mp3 player, enhancing individual and collective wellbeing. In contrast to medications, a portable mp3 player has remarkably very few side effects, and is relatively inexpensive.

It is claimed that, in Antiquity, Canus, a Rhodian fiddler, used music to “make a melancholy man merry, …a lover more enamoured, a religious man more devout.” One of Alan Partridge’s favourite quips was, “If music be the food of love, then play on.”

Music is a unique phenomenon in being at the interface between emotions, memory and perception in the brain. Cognitive neuroscientists have long recognised that music presents a special conundrum. Only last week, a paper in the prestigious journal Brain was published which sheds light on why music has this unique power even in advanced Alzheimer’s disease. The authors of that particular study hypothesised that parts of the brain, which were relatively unaffected in advanced Alzheimer’s disease, had a special rôle in the appreciation of music (parts of the brain including, perhaps, the anterior cingulate and pre-supplementary motor area).

The relevance of music to residents who live with dementia is all to see in the current series of #Dementiaville, now showing on Channel 4. But in this age of ‘doing things differently’, which is often sadly used as code for cutbacks, there has been a conspicuous reluctance to give non-pharmacological approaches for dementia serious consideration. As England, and other jurisdictions, teeter at glacier pace towards integrated care (and perhaps even whole person care), it is possible a volte face will some day come with the adoption of social prescribing and its offerings.

I feel the way for this alternative view of dementia policy to get momentum is not to have tokenistic involvement of people living better with dementia on a select few number of panels. They must be given prominence in leadership rôles so that they are listened to properly in service design, provision and research. The mantra of ‘there is no alternative’ has had its day.