We talked to Rosalind Bradley about her new book, her motivations for writing it and her relationship with the concept of death. 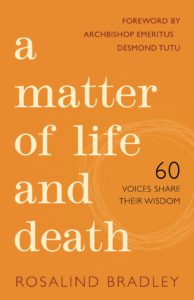 What motivated you to write A Matter of Life and Death?

The trigger for this book was my mother’s sudden death while she was staying with us in Australia, on holiday from England. It was a few days after ‘9/11’. One day we were strolling around the Sydney Opera House, the next day she was in Emergency Department following a cardiac arrest. I can still recall the physical and emotional numbness I felt that day and for many months afterwards. Her death completely shocked me as there had been no signs of any ill-health.

I had just started a new job, which certainly suffered as I tried to come to terms with this new reality. I am convinced now that the emotional numbness I felt inside me, which later manifested itself in chronic back pain, was the build up of grief inside me. In the wake of my mother’s death and the death and destruction from ‘9/11’, I became intensely curious about death and gradually, through a long period of spiritual and physical renewal, I accepted what had happened.

Several years later, after two close friends who were siblings died, I felt even more driven to come to terms with what is death? I knew I had to face up to my own fears and decide how I wanted to live the rest of my life. Exploring the mystery of death in all its rawness and complexity and gleaning some meaning from it led me to create A Matter of Life and Death.

People have very different relationships with the concept of death and dying. During your research for the book, did you discover any particular attitudes that surprised you?

Initially I was surprised and even overwhelmed by the huge variety of different attitudes towards death. Very naïve in hindsight! Perhaps the death row inmate’s attitude of not being afraid to die was a wonderful surprise. In fact quite a few contributors wrote that.

Before I began the book, I had not understood the paradox of living and dying. One passage says ‘Keep death before you at all times.’ I knew that this was not meant to sound morbid but it was to encourage us to be mindful that we are mortal and we could die any time. The realisation of this has in some ways made me feel freer.

There’s a lovely story in the book about Buddhist monks who turn their empty water glasses upside down every night before they go to sleep to show the world that should they die during the night, they are ready for the journey.

Some contributors mention the healing potential of dying. How dying can open up an inner spiritual side of us – to both the person dying and to the bereaved. Contributor Dr Irene Adams, an oncologist, shares her experiences of working with cancer and AIDS patients: that ‘as our body fades, our spiritual side becomes stronger.’

What did you ask the contributors for?

I asked each contributor to choose a passage or image that best expressed death to them together with their personal reflections on their choice of text/image, based on their spiritual inclination or an experience with death. Their insightful contributions made me deeply aware that death is very much part of our lives.

Passages include poems and prose by John O’Donohue, Rumi, Mary Oliver, Raymond Carver, Thomas Hardy, Tibetan Buddhist Sogyal Rinpoche and verses from the Bible, the Qur’an and the Bhagavad Gita.

The book presents 60 different voices – how did you go about choosing the contributors?

They all originated in different ways. After a tentative start, the book took on its own form. I was constantly on the lookout for leads from the media as well as receiving personal recommendations. When I noticed a gap in the book, I researched to find the appropriate person. Of course there were many more people I could have asked and I found it hard to stop! A few people said no but suggested others. Most people were very generous with their responses and I felt – and still do – very blessed to receive these personal insights on such a sensitive subject. A few people I contacted directly ie through ’cold calling.’ The following examples: a death row inmate, a coroner and a Holocaust survivor are typical.

I thought including someone on death row would be interesting and Mitchell did not disappoint.  The Australian Buddhist nun, Venerable Robina Courtin, who has worked in US prisons was my main contact. Overnight she wrote ‘You must write to Mitchell Willoughby.’ So I did. Robina sent me a DVD Chasing Buddha, which included footage of a visit to Mitchell and a phone interview with him. The latter was inspiring with both Robina’s and Mitchell’s humanity shining through. With some trepidation I wrote to Mitchell who replied with five pages of handwritten text. I loved it immediately and edited it for the book. Mitchell is a courageous man and I am still in contact with him now through a prison email system.

The London based coroner I found through the internet. He replied about 6 months after I first wrote to him (work pressures had prevented him contacting me before) so that was a surprise.  I met the Holocaust survivor, an amazing lady called Olga Horak, through the Sydney Jewish Museum where she is a Volunteer Survivor Guide, and interviewed her. There is a touching postscript and photo to her ‘page’ when Olga reunites with a war artist/photographer who first saw her in Bergen-Belsen in 1945, weighing just 29kg.

Do any of the perspectives strike a particular chord with you?

Many! The theme of impermanence is one that reoccurs throughout the book and not just in the Buddhist contributions. A Christian contributor, who was dying, wrote a moving letter to colleagues and friends saying he had learnt that ‘so much of what he valued in life is only of a temporary nature’ and at some stage we have to learn to let go of our ego.

This made me ponder on my own temporariness and my ego! He also emphasised the importance of gratitude – how grateful he had been for the love and support he received from friends and family. That struck a chord too.

The importance of preparing for death is a key theme in the book. This includes talking about death with your loved ones something which, we all know, is not easy but it can bring a sense of healing, a sense of peace and meaning to life.  Preparing for death helps shape your life and living.  The line by Raymond Carver in Late Fragment, chosen by Canon Reverend Rosie Harper, is very poignant: ‘And did you get what you wanted from this life, even so?’

What are you hoping readers will take away from the book?

I hope that readers will gain a greater sense of their own mortality and they will be more comfortable in talking honestly about death with others especially to those close to them. If people can come to terms with their own death, and fully realise that their own lifespan is limited then often their own lives can become enriched.

Personally, I believe that death is a natural transition from one stage of consciousness to another. As one contributor neatly put it, ‘death is a comma, not a full stop’. Whether you accept that premise or not, the fact remains that we are all in transit and need to face up to the reality of our own death. How we deal with that realisation is at the heart of this book. As an Irish quote says. ‘You cannot hide from death.’

For more information or to buy a copy of A Matter of Life and Death, please follow the link.