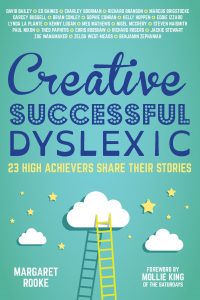 Margaret Rooke, author of Creative, Successful, Dyslexic, explains the journey she went through in writing this book. Compelled as a mother to help her daughter, who was diagnosed with dyslexia as a teenager, Margaret set about using her 20 years’ experience as a writer on national newspapers and magazines to approach the 23 high achievers with dyslexia whose stories form the book.  Its aim, she says, is “to reassure anyone with dyslexia and their loved ones – together with any others who do not seem to shine naturally at school in these results-driven days.”

When I found out my 13-year-old daughter was dyslexic, my first response was shock. She had ticked all the educational boxes at primary school very happily.

She stopped learning as soon as she arrived at secondary school and we spent a couple of years working out why this was. Was it the school? Was she on some kind of strike? Was she simply unhappy?

Then, while clearing out at home, I found a poster she had made when she was ten or 11. She was proud of it because she’d won an award for it so we had kept it. It was an anti-bullying poster and the slogan she had written was ‘Tell an adlut’.

Suddenly I realised. As we began to put the SEN wheels in motion I had an underlying determination that any label she was given would not shatter her confidence. I didn’t want her to think that being dyslexic meant she was any less likely to achieve whatever she wanted in life.

I approached Dyslexia Action and told them I wanted to produce a book of interviews of successful people with dyslexia to drum home this message to my daughter and others in her situation, as well as to raise funds for the charity. They agreed straightaway. I started work and found out that not only should children with dyslexia not let it hold them back, but that it can sometimes be an advantage.

I wanted children to know they were not alone and that after school could be their time to shine. I wanted their parents to know the same. And I wanted teachers to know what was going on for some of the children in their classes, who may be distracting, or being silly, or arriving late, or chatting, or playing up in some other way.

My book is called Creative, Successful, Dyslexic: 23 High Achievers Share Their Stories. In it, Darcey Bussell, David Bailey, Richard Branson, Benjamin Zephaniah, Zoe Wanamaker and many more describe what sitting in lessons felt like for them and how they coped, from hiding in cupboards to playing truant. They all had talents which led to them achieving greatly in their careers after school which didn’t help them while they were at school. Many ascribe having these talents to being dyslexic.

Some explain they have a creativity and outlook which enabled them to achieve in the way they have. The see the way that dyslexia makes their brain work differently has been an advantage for many of them. Others say that dyslexia has simply given them a determination never to fail again as they failed over and over again at school.

England rugby union player Chris Robshaw has another take. “Having dyslexia taught me an important lesson about bouncing back when things don’t go my way,” he told me. “Everyone playing sport needs this skill and it has been valuable to me throughout my life.”

The book’s message isn’t that everyone with dyslexia should achieve like Sir Richard Branson. This would be more discouraging than anything. For me it’s about encouraging those with dyslexia to do their very best in whatever they decide to do. As racing champion and businessman Sir Jackie Stewart says in the book, “If I had been a window cleaner I would have done it well. I could have been a world champion window cleaner!”

The messages in the book include the importance of retaining confidence in the future for yourself if you are dyslexic, for your child if they are and for the children in your class if you work in a school. Highly significant is that most of the successful people in the book had at least one adult ‘on their side’ as they were growing up who believed in them no matter what negative messages they were receiving from themselves or from others. Support like this costs nothing and can change lives. We can all be that supportive person for someone with dyslexia. Starting today.