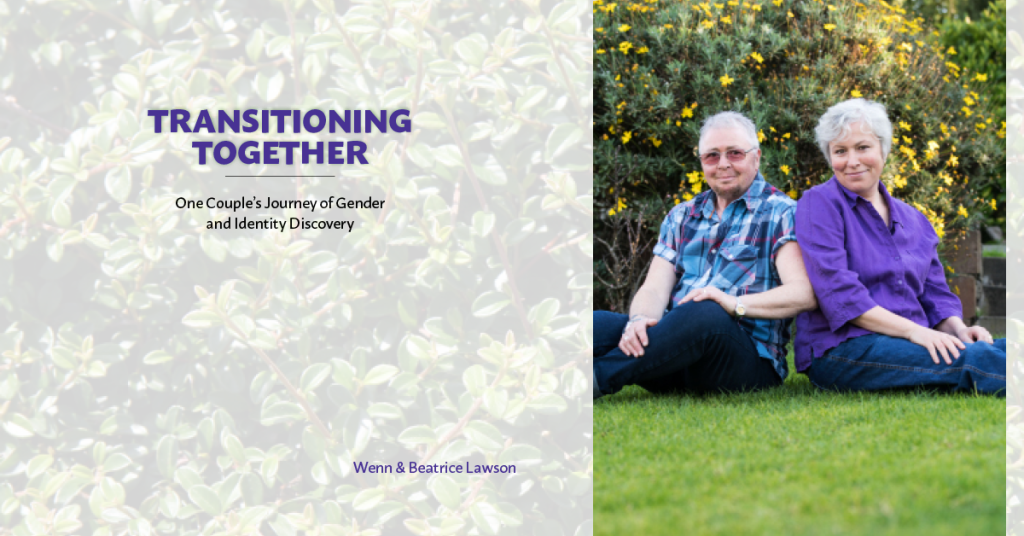 ‘Transitioning Together’ is the story of Wenn and Beatrice Lawson, an eye-opening account of a couple’s experience of gender transition. After 20 years together, Wenn decided to transition from female to male. This book explores the emotional, psychological and physical challenges that come with transition, told from both Wenn and Beatrice’s perspectives. We asked Wenn a few questions about the couples’ journey.

Why did you decide to tell your story from both perspectives?

We decided to tell our story from both perspectives because we are a couple and whatever happens for one of us has repercussions for both of us. Also, as we began our journey it would have been great to chat with other couples to get some insights into what to expect. But, we couldn’t find any other couples who were available to share with in person. The only ones we found were over the internet and not accessible to chat to in person. Although we each had a counsellor to share with, a person who most definitely was committed to our best, they were not experienced either. We and they are learning on the job!

You and Beatrice were together for many years before you decided to transition. How do you think this influenced both of your experiences of transitioning?

In many ways it’s much harder on Beatrice because she loved a woman and was never primed for me to be male. Her love and commitment to me has won out over the gender barrier but she grieves for her loss each day. It’s only been 4 years since the decision on that day, but, to her it feels like an eternity. I get what and who I’m designed to be, she loses what she always had. I know she had a man (inside that’s who I’ve always been) but neither of us knew that then. She was used to the rounder, softer contours of my body. These have been replaced with a squarer form and one that is hairier, bonier and has a much lower voice. So, although the male me is growing on Beatrice, she still looks for the smile she knew, or the tilt of my head, symbolic of the old me she knew, and for other things that let her know I’m still me. Whereas I look for the evidence that the old form is gone and I rejoice in the release of the person I really am.

What has been the biggest challenge for you during your transition?

For me the biggest challenge has been defending the man I’m becoming to my wife who has lost the woman she once had. At times it seemed that the ‘male’ me was being blamed for everything. I didn’t want to be defending myself all the time but learning to separate out ‘relational’ issues from ‘the gender’ ones has been quite a challenge.

The biggest challenge for Beatrice has been seeing the Wenn she loves while not being side tracked by the male image Wenn is projected through. Beatrice’s experiences of the males in her life were not positive and this coloured her perceptions. The more Wenn grew in confidence and seemed to need Beatrice less, the more Beatrice felt unimportant and this was an echo of her past. Learning to trust in Wenn’s love is the biggest challenge.

I can honestly say that my faith hasn’t changed. My Heavenly Father is the same and I know He loves and accepts me, just the way I am. What has changed is I can no longer share and rejoice with the community of others that I was once part of. The church family were everything to me. That has gone now and I miss them.

Both you and Beatrice are on the autism spectrum. Do you think your autism has affected how you’ve responded to the challenges that come with transitioning?

Oh most definitely. I have a number of sensory issues that I live with. Some of these have increased. For example, if you sit to pee the urine smell probably isn’t overwhelming. But, when you stand to pee the urine smell gets right up your nose. I very much enjoy standing to pee but I dislike the way it smells. It’s a similar story with body odour. Mine became stronger as a male, but, it seems to have calmed down now. I coped well with the changes to my physical body and can look in the mirror now… I avoided this before. My whole body is now available to Beatrice whereas there were parts that were out of bounds before. We also think that being autistic has helped us in other ways because we tend to be literal, black & white in our thinking. That was then, this is now, kind of stuff. Our loyalty to one another probably has its roots in autism too.

Was there an ‘aha!’ moment when you realised that you were transgender? Or is it something you have always been aware of?

For me there definitely was an ‘aha’ moment when the light went on. I really was surprised and shocked when this happened. I did not know I was transgender before…. I knew I always liked ‘boys’ stuff growing up and was much more at home in the male world, so to speak. My mates were male more than female and I didn’t think or act like females do. However, I’m very maternal and loved being Mum to my kids. Joining the dots has probably been delayed due to our autism, but, once that light went on, there was no turning back.

You have three grown-up children, and grandchildren too. How did they react when you told them about transitioning?

My children were not at all surprised and, even though I’m sure it’s tough on them, they are with me 100%. My kids are very accepting of difference, despite their own autism, and we just get on with the job of being a family. It’s the same with the grand-kids. They love us for who we are… not Nanna anymore but Grandpa Wenn.

Transitioning Together is out now – click here for more information.