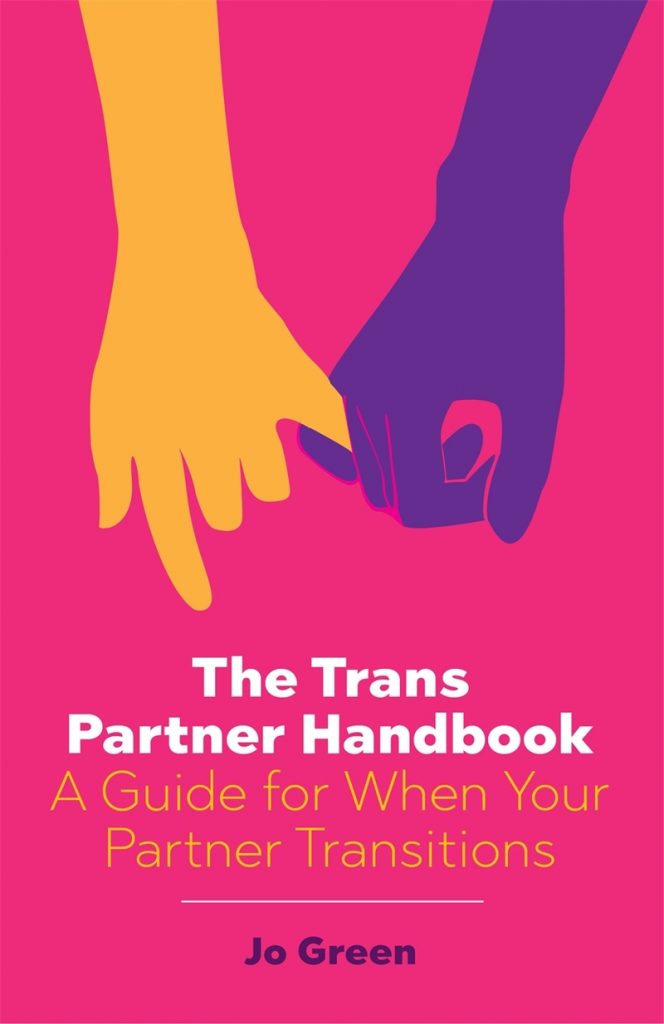 Jo Green, founder of Distinction Trans Partner Support and the author of The Trans Partner Handbook, explores the importance of talking openly about mental health when you are in a relationship with a trans individual.

Trans people are more likely than the cis population to have mental health issues, which are caused by a long history of gender dysphoria and/or chronic minority stress rather than by being trans (World Professional Association for Transgender Health, 2011). Minority stress is the increased stress of being part of a minority group, and it is due to the lack of awareness in the general population and consequent discrimination faced by people in a minority.
“I think the worst of this aspect was when my partner was growing up and the times when she contemplated suicide. This was at a time when there was no internet or groups visibly available. I feel very fortunate that my partner confided in me very early in our relationship, and the past 15 years, it has been a journey we have made together. I do have to reassure her that [I] will always be there for her, which I will be, and have given it lots of thought to be sure that this is a situation I can cope with and am happy to be in.” (Avril)
According to the World Professional Association for Transgender Health (WPATH), trans people can present with a number of mental health concerns, such as depression, anxiety and self-harm. They also present with compulsivity, substance abuse or sexual concerns, as well as being more likely to have suffered a history of abuse or neglect. Trans people are also more likely to suffer personality disorders, eating disorders or psychotic disorders. WPATH also notes that trans people are more likely to present with autistic spectrum disorders.

“I have learned to work with my partner’s mental health needs. [I] have learned cues that help me know when he is feeling anxious or stressed, and [I] encourage him to talk if he needs to or to seek medical assistance if there’s a need for that kind of support. It’s definitely not something to be ignored or avoided, and in most cases, it’s a requirement for the transition process.” (Julia)

This being said, it is also important to factor your own mental health needs into the equation. You need to be able to look after yourself before you try to look after someone else. Transition can be very stressful at times, and these stressors can exacerbate existing mental health concerns.
The ability to communicate openly about issues beyond transition can ease a lot of the stress of going through transition.

“I suffer with depression/anxiety, and my partner has BPD [borderline personality disorder]. Now that everything is out in the open about both of our ailments and he is living as he has always wanted to, we are both a lot more stable within ourselves and therefore able to support each other if necessary.” (Rene)

However, even if you are the most supportive partner, transition is stressful. The long waiting lists to see gender specialists, the time it takes between appointments, the legal transition and the need to jump through hoops to be able to meet the criteria for hormones and surgery can take their toll. Being part of a strong support network, especially one that’s in the trans community, can be a massive help.

“Don’t underestimate the stress of transition. Although ultimately I think we both feel stronger now, there has been a huge upheaval in our lives – changing community, changing identity, the demands of medical appointments and everyday transphobia really take their toll. Support for both of you is really important – things you can access together and separately. I think I was lucky being non-binary, because I had access to support from the community myself and could share some spaces, but it was important my partner had his own spaces too, just for him – particularly around medical changes he wanted that I didn’t. I can’t recommend enough getting involved with the local trans community and networking, but you have to be willing to see past differences and diverse ways of seeing things and also be really aware of internalised transphobia when you interact with other trans people. They are the experts, but we are so often taught to look down on them, and we don’t always notice we’re doing it.” (Ricky)

“I was in therapy while I was with my partner, but I didn’t consider that my therapist understood my relationship at all, as he was a heterosexual man! When I wrote my newsletter about being a partner, he read it, and made a point of apologising to me because, as he said it, he had not understood what I was going through.” (Sasha)

It’s important to find the right therapist, so you may need to try several to find the one that works for you.

Jo Green is the author of The Trans Partner Handbook and founder of the Distinction Trans Partner Support Group. Jo’s pronouns are they/them/their.