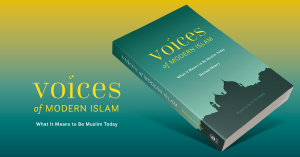 Declan Henry, an Irish Catholic social worker, has been working with Muslim youth over the past few years. Intrigued by Islam, he set about interviewing more than one hundred British Muslims about what their faith means to them. In this blog, he recounts how an unexpected conversation with a Muslim taxi driver made him reflect on what he’d learned about Islam.

A delayed flight from Aberdeen to London resulted in me missing the last train home to Kent. Getting a taxi resulted in an unexpected conversation about Islam with the driver. Salman, a British-born Bengali, in his thirties, worked during the day in a professional capacity and a few evenings a work at his uncle’s taxi firm. He opened a relaxed conversation about Ramadan (which had just started) and before long we were deep in a discussion about Islam.  Salman was impressed by how much I knew about his faith before I explained I had just written a book about it.

Ramadan is the holiest month in the Islamic calendar. It is a time of fasting, purification, reading the Qur’an and doing kind acts. The start and finish of Ramadan is determined by the sighting of the moon. The month of Ramadan entails practising patience and tolerance in the absence of food or drink. The key rules are that you can only eat a light meal before daybreak and have nothing else to eat or drink until after sunset. Very few Muslims complain about fasting and take it in their stride. Ramadan is not the only time of the year they fast. Individuals are encouraged to fast from dawn to dusk on random days throughout the year.

Designed to make people more connected to Islam, Ramadan also increases time spent at the mosque. Muslims say an extra set of prayers daily during this holy month (increasing prayers from five to six times a day). Every day during Ramadan, a chapter and a quarter of the Qur’an is read aloud after evening prayers so that by the time Ramadan comes to an end, the entire Qur’an will have been recited. During the month of Ramadan the prophet Muhammad used to recite the Qur’an to the angel Gabriel, which was rather touching because ordinarily it was Gabriel who delivered the words of God to the prophet.

During my taxi ride, the radio was on in the background and a woman was discussing the abortion referendum in Ireland. This led me to ask Salman about his views on abortion. He said Muslims are against abortion – it is referred to in the Qur’an 81:8-9 in the words: …The beautiful girl will say, why did you kill me? The complete developmental stages of a foetus’ life are also outlined in the Qur’an 23:12-14 but the most fascinating belief Muslims hold is that God blows a spirit into the foetus around week 16, and at that point a foetus can potentially survive on its own without its mother should it be suddenly born.

I assumed that maybe Salman had initiated our conversation, thinking I was a customer who either knew little about his religion or would respond with criticism because of extremism and radicalisation. The truth is the topic was only slightly referred to in our conversation and was not deliberate. When extremism was mentioned, I asked Salman if he thought it would make any difference in preventing the many fractions and divisions amongst Muslims in the world today, had Muhammad lived for another 20 years (he died aged 63).  Salman agreed there were many fractions even when the prophet was alive, and he didn’t think another 20 years would have made any difference. Political struggles for power existed back then and exist now. It boils down to greed and power. Even in Ramadan there isn’t a proper ceasefire from war and suffering in places like Syria and Yemen.

Our discussion then switched to Muslims and Jews. Salman pointed out that it is mythical to say Muslims hate Jews and vice versa. The current conflict in Palestine has nothing to do with religion, rather it concerns politics and land rights. Muslims and Jews have historically lived peacefully beside each other for centuries and at one point shared the same space in Spain for over 800 years. Across the world today, there are several settled Jewish communities in predominately Islamic countries and cities like Egypt, Iran, Morocco and Istanbul.

Salman pointed out that Muslims are more outward thinking and accepting of other faiths than people imagine. Contrary to misconceptions, Muslims have a high regard for Jesus, who is mentioned over forty times in the Qur’an. In fact, there is a full chapter in the Qur’an about Mary, the mother of Jesus, and her parents.  Muslims also believe the sources of many world religions like Hinduism, Confucius, Buddhism and Daoism, amongst many others, are valid and true. God said in the Qur’an that he sent messengers to all people. There were 124,000 prophets before the final messenger and prophet – Muhammad.  Muslims believe, though, that the Qur’an is the direct word of God whereas other divine books were ‘Bushra’, namely glad tidings from God, written by others and therefore not a direct revelation of his word.

The final part of our conversation focused more on the Qur’an and how its revelations were ahead of their time. The Qur’an is the only holy book which advocates the emancipation of women – it states they have the right to an inheritance, to own their own property and to divorce.  Men are expected to be economically responsible for their wives, children and the running of the family home. Many women choose not to work and instead give their full attention to raising their children but those who do work are allowed to keep the money and spend however they wish.

Interestingly, there are many scientific and mathematical pieces of information contained in the Qur’an. An example of this is sea and land. The word ‘land’ appears 13 times in the Qur’an, while ‘sea’ appears 32 times. These numbers total 45. If we divide the number of references to land in the Qur’an, 13, by 45, the result is 28.9%. When we divide the number of references to sea in the Qur’an, 32, by 45, the result is 71.1%. These ratios are the exact ones that apply between water and dry land on Earth. The repetition of these words in the Qur’an is a statement that the Earth is 71% covered in water and 29% in dry land. It has only been possible to arrive at this ratio in the present day, and only because of the availability of satellite photos and computer calculations.

The hour-long journey came to an end when we arrived at my house and it was time to say goodnight. My conversation with Salman made me realise again how much depth there is to Islam. With that in mind, I would recommend to anyone who encounters a Muslim who is willing to discuss their religion, that they ask questions, listen and learn. No Muslim expects a non-Muslim to be an expert and in my experience they are only too happy to explain things in a polite manner. The end result for you will be an enriching experience.

Follow this link for more information or to buy a copy of Voices of Modern Islam.