This blog is a helpful, in-depth exploration of deciding on the right time to tell a child about their autism diagnosis, and judging whether they are ready to be told, from the author of All About Me.

Deciding on the best time to start talking to a child about their autism is not always straightforward. The guidance summarised in this article has therefore been included in All About Me to help parents and professionals judge for themselves when individual children might be ready to participate in the programme and be told that they have autism. 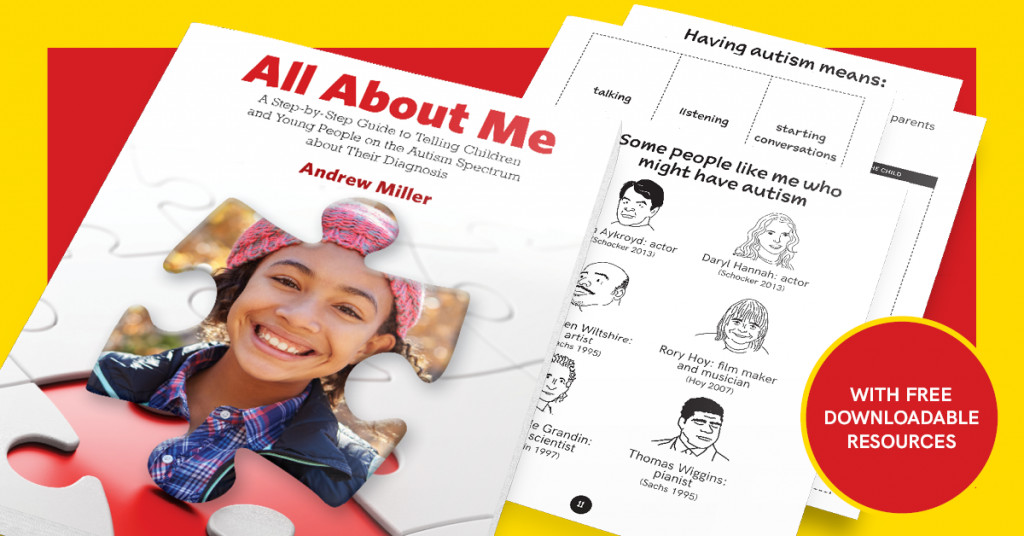 Children and young people aged between 6 and 18 years have participated in All About Me and the overwhelming majority of these individuals responded well to being given their diagnosis in this way. The vast diversity of individuals with autism and their differences in development mean that there can be no set age for telling a child about their diagnosis. It seems to be broadly accepted amongst autism practitioners that telling children too early in their development could run the risk of confusing them. Younger children might acquire skewed views of what having autism means. On the other hand, the available research literature cautions that the risks of more negative and extreme psychological and emotional reactions to being told they are autistic might increase the longer an individual is kept waiting for their diagnosis.

Experienced practitioners have advised that children should be informed about their diagnosis while they are still at primary school and this seems sensible since most children with autism attend mainstream schools and during this time are likely to start becoming aware that they are different to the typical children around them. It has also been argued that to reduce the risks of more negative outcomes, children ought to be introduced to their diagnosis before they start to go through adolescence. I have found through my own work that the most successful outcomes to disclosure tend to occur when the child has been told within this time frame.

Arguably, whenever possible, introducing children to their autism should be timed to pre-empt any of the potential negative consequences that could develop whilst the work is being delayed. Some of the reported experiences of autistic adults referred to in the book suggest that it needs to happen before an individual starts to draw false conclusions about their differences and needs, or starts to accept and adopt any inaccurate negative labels that others might use to describe them with. Moreover, responses from participants in research cited in the book appear to imply that disclosure of their own diagnosis really does need to happen before a child begins to develop negative perceptions of autism in general. Arguably this work should also commence before the challenges presented by an individual’s autism become overwhelming enough to force disclosure in difficult circumstances and for negative reasons.

A child questioning or expressing concerns about their differences is regarded by many as a clear indication that they are ready to be told about their autism diagnosis. Individuals querying things like: why they are the only child in their class who has an adult sat next to them in lessons; their difficulties coping in noisy and crowded situations, or; why they have no one to play with; have often proved to be good starting points for including children in All About Me.

On the strength of this, some adults could decide to defer conversations about autism until a child starts to raise these matters by themselves but this should only be done with caution. An individual not mentioning their differences should not be taken as definitive proof that they are unaware of having them and are not anxiously awaiting some sort of explanation. The reported experiences of adults on the autism spectrum offer proof that differences in social communication can leave children unable to articulate and express their concerns to others. Gunilla Gerland said that she simply lacked the words needed to do this (cited in Sainsbury 2000 p.126).  Similarly, given their differences in theory of mind, it might not necessarily occur to some children with autism that they would need to approach another person to talk about their worries. Children with autism can also find it stressful to talk about things that they find emotionally upsetting and so may choose to avoid mentioning any anxieties they might have around being different.

In the meantime, a child or adult could be waiting anxiously for months or possibly years for much-needed answers and reassurance. It might be argued that, in situations where children are not voicing concerns or enquiring about their differences, adults should carefully monitor their behaviour for any outward signs of frustration or distress. Even so it can be very difficult to detect how aware some children might be of the effects of their autism.  In my experience, children with autism’s facial expressions and body language can often betray how they are feeling on the inside.

Overall, based upon the successes of my own work, knowledge of the emotional harm that withholding a child’s diagnosis risks and the possible consequences of accidental disclosure, I     agree in the main with Clare Sainsbury’s assertion as an autistic adult that: “Any child who is old enough to understand a simple explanation of their condition is old enough…” (2000 p.126).  All About Me is built upon my already stated belief that all children who are able enough have an absolute right to be told about their autism in an appropriate way at the earliest opportunity, provided that it is not thought that this would cause them unnecessary psychological distress at the time. To support this, All About Me offers ways of matching the explanation of autism to individual children’s ages, stages in development and overall levels of understanding.

This work could turn out to be damaging to a child if it is carried out against the background of an individual going through a particularly stressful and traumatic period. In these circumstances it may be wiser to consider delaying disclosure until things have calmed down if the general consensus amongst the adults is that introducing the child to their autism at that point would make matters worse. But the threat and potential additional consequences of the child finding out accidentally or reaching false conclusions about the cause of their problems in the meantime needs to be factored into this decision.

It might also be sensible to delay telling children who appear to have developed less awareness of their own attributes and how people might differ from each other.  Given that the programme explains autism to children in the context of their overall strengths and challenges, not having this understanding will make it harder for them to accept and make sense of their diagnosis. Some of the research cited in the book proposes that introducing an able child simultaneously to a range of challenges they were previously unaware of having could prove shocking and cause them to deny or disbelieve their diagnosis. I have also found that more literal children who lack similar self-insight usually appear to react indifferently to being given their diagnosis. Disclosure appears to have little meaning for them.  In most cases, any delays caused by these issues need not be for too long if suitable preparatory work can be carried out to gradually introduce these children to their own attributes. Recommendations on ways to do this are offered  at various points in the book.

If mistakes are made over the timing of this work however, the structure of the All About Me   programme still allows for it to be ceased or deferred at any time during the first of the three sessions, should it becomes obvious that a child is not ready to be told after all. The child would not have been told about their diagnosis at that stage and so it is unlikely that any harm would have been done.  A decision like this could be taken if a child appears to be overly confused by the work or if they show signs of becoming traumatised as their challenges start being brought to their attention. To promote the best outcomes for children, this work should always be reviewed collectively by the adults at the end of the first session before thinking about how best to move forward to the point of telling the child that they have autism.

In summary, the best times to start telling children about their autism could be:

Finally, before the work commences, it is important for the child’s parents and any other adults involved in the programme to reach a point where they too are ready for this to happen. With this in mind, the book goes on to explore key issues around adult readiness. 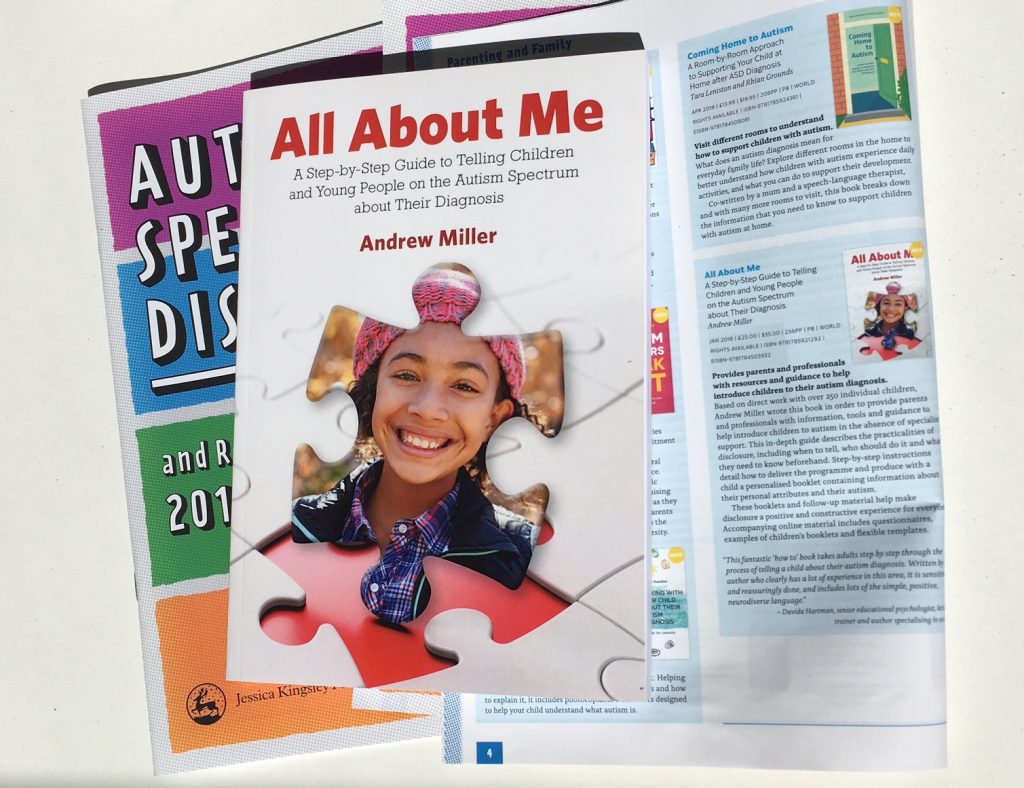