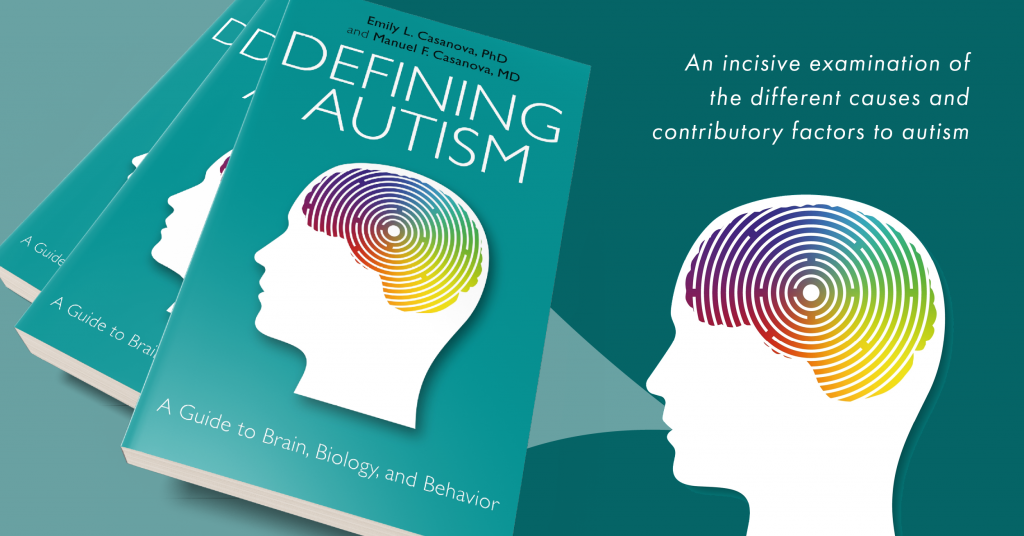 In Defining Autism  Emily L. Casanova and Manuel F. Casanova present a new way of understanding  autism using cutting-edge research and ideas.  Emily L. Casanova is a research assistant professor in Biomedical Sciences at the University of South Carolina’s Greenville School of Medicine, working in close conjunction with the Greenville Health System. Her research foci include the autism spectrum and Ehlers-Danlos syndrome/hypermobility spectrum disorders.  Manuel F. Casanova is the director for the Childhood Center for Neurotherapeutics at University of South Carolina’s Greenville School of Medicine and professor within the department of Biomedical Sciences. He is a world-renowned neuropathologist and expert on neurodevelopmental conditions.

As any person with autism or a family member of someone with the condition can tell you: Autism is complicated. People across the spectrum share many similarities, but each person is different, experiencing his or her own unique strengths and challenges. Some individuals may hold jobs and have children of their own. Others may require significant daily support for the entirety of their lives. Some have genetic conditions like Fragile X Syndrome or Down Syndrome. And others still may develop autism following prenatal exposure to substances like alcohol or antiseizure medications. As scientists continue to tease apart the complexity of the autism spectrum, we now realize that even though it is a single syndrome it is composed of many different conditions, each of them equally as valid as the next.

In our new book, Defining Autism, we explore the different aspects of biology that underpin this broad, complicated spectrum—addressing it from many different vantage points. We examine facets of early brain development that may give rise to the behavioral syndrome, as well as some of its co-occurring conditions like epilepsy. We also delve into the genetics and environmental stressors that influence the development of autism, including the ways in which gender may affect these tendencies. In regards to environmental factors, we review medications, diet, medical conditions, and infections, all of which may increase the likelihood a child will develop autism.

We devote an entire chapter to the poorly studied topic of “autistic regression,” and explore how epilepsy, immune disorders, and mitochondrial disorders may each play a role in its occurrence. We also explore the possibility that some types of regression may be infantile forms of neurodegeneration, which take a different course than the neurodegenerative conditions associated with senility, such as Alzheimer’s disease.

The chapter on epilepsy reviews what we know about the relationship between autism and seizures, how both conditions share an excitatory-inhibitory imbalance, and how a naturally lower seizure threshold during late infancy and toddlerhood may partly explain the occurrence of regression during this crucial time period of development. We also review the unusual gender disparity in females with both autism and epilepsy, finding that females have higher epilepsy rates overall despite being diagnostically fewer in number.

The book continues by exploring the relationship between autism and other neurodevelopmental and psychiatric conditions, such as ADHD, learning disabilities, mood disorders, and even schizophrenia. Not only do many of these conditions occur alongside one another in the same families or even the same individuals, they also share some significant genetic overlap, suggesting that a broad interrelated neurodevelopmental spectrum exists and can express itself in various ways within the same family.

In keeping with the idea of a spectrum, we also review research concerning the Broader Autism Phenotype (BAP) (aka “autism light”) that is common in some autism families. This includes a thorough look at the personality and cognitive characteristics that are common in BAP, many of which are shared with the autism spectrum, albeit to a lesser degree.

The autism spectrum is composed of people who range the cognitive gambit, from intellectually disabled to sheer genius. In the second to last chapter we look at this relationship through the biographies of several famous autistic individuals, including Stephen Wiltshire and Daniel Tammet. We also explore the evolution of human intelligence in the hopes that we may better understand some of the human-specific features that occur at an extreme within the autistic brain.

Defining Autism concludes by attempting to do exactly that: Define autism. Although the autism spectrum is a single syndrome composed of many different conditions, evidence suggests that there is a common underlying biology to the spectrum despite its heterogeneity. In the final chapter, we pinpoint the different areas and systems of the brain that are associated with the primary symptoms of autism, namely sociocommunicative impairment and restricted and repetitive behaviors. Impairment within these systems, regardless of the cause, may ultimately lead to some form of autism. This overlap may ultimately help to explain the common behaviors in this very complex syndrome.