‘A Parents’ Guide to PANDAS, PANS, and Related Neuroimmune Disorders ‘ by Patricia Rice Doran, Christine L. Amabile, Tiffany Tumminaro, Heather Korbmacher, and Diana Pohlman is a book written directly for families with input from parents. It  gives clear advice on what to do if your child has PANDAS, PANS or encephalitis. 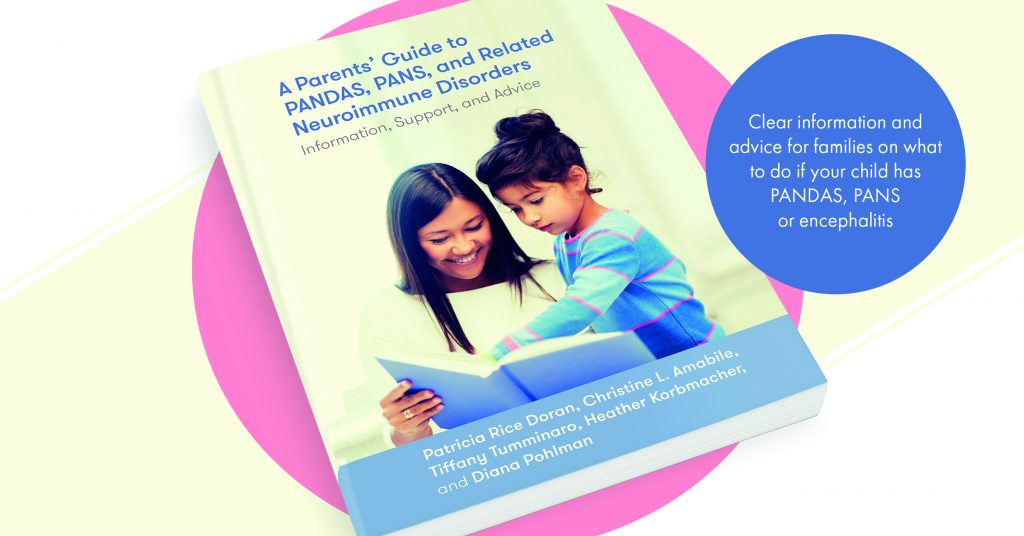 Read this extract from the book below to learn a little more on how PANDAS/PANS makes it’s presence known:

It is estimated that 1 in 200 children may be affected by PANDAS (Westley 2009). Neuropsychiatric and autoimmune conditions are found to be common among first-degree relatives and siblings of PANDAS patients, possibly suggesting genetic susceptibilities. If you have a child, or work with a child, who is diagnosed with PANDAS or PANS, it is likely that you know at least something about one or both disorders. Survey and informal anecdotal findings from the PANDAS Network, the leading research and advocacy nonprofit, have indicated that many caregivers see multiple physicians before receiving a diagnosis, and many families seek out physicians with experience in PANDAS or PANS after coming across lists of symptoms and wondering for themselves if their child might be affected (PANDAS Network 2018). However, as provider awareness increases, more and more parents and caregivers may be hearing about PANDAS or PANS for the first time at the doctor’s office. Symptoms of PANDAS and PANS may manifest in different ways, which can make diagnosis particularly challenging.

“Our experience with PANDAS was a challenge because our son’s onset was very early—he was just four—and very subtle. He began washing his hands over and over and couldn’t leave me for a moment without crying. However, he was fine in every other respect, and that first episode resolved on its own after about two weeks—just when I had begun calling child therapists to find an appointment. It wasn’t until years later, when he had a formal PANDAS diagnosis, that we put the pieces together and realized his actual onset occurred then.”

“My daughter woke up one day a completely different child. She exhibited every symptom listed in the criteria—anxiety, refusal to leave the house, rage, intense OCD. It was as though she was possessed. The first thing we noticed was this unusual blinking. Over the next few days, it had progressed so my daughter was not just blinking—she was coughing, repeating one or two words constantly, and jerking her head. She had never had tics before, so this was really unusual.” “Our doctor treated my two oldest children but wasn’t sure if the third, our daughter who had had immune issues and developmental issues since childhood, had PANDAS or not. She had a lot of anxiety, but didn’t have the typical sudden onset or violent episodes that our other children had experienced. I am very grateful our doctor decided to treat her. Two days into antibiotic therapy, her longstanding bedwetting issues disappeared completely. Over time, her anxiety and developmental challenges became much less as well.”

While symptoms may manifest in ways that vary widely, there are some identified areas which are most frequently affected. These are described below.

As described in the diagnostic criteria, physical well-being is often affected. Children with PANDAS/PANS may experience sleep disruption, particularly difficulty getting to sleep and staying asleep. They may sleep at odd hours or exhibit narcolepsy—spontaneously falling asleep— throughout the day. They may also have urinary symptoms, such as incontinence or the need to urinate over and over. Anorexia or restricted food intake is also commonly seen in children with PANDAS/PANS.

One pediatrician has described separation anxiety as a “hallmark symptom” of PANDAS (Kovacevic n.d.), frequently occurring out of the blue or with a dramatic increase in intensity, behavioral symptoms such as anxiety (including fear of leaving home or leaving a preferred person, such as a parent), obsessions, compulsions, rage and aggression, and oppositional behavior. Emotional lability (such as laughing or crying with little notice or without obvious cause) is also not uncommon.

All effects of PANDAS, to some extent, are neurological in that they originate with a brain-related syndrome. Several are explicitly and uniquely considered to be neurological symptoms, typically treated with a referral to a neurologist. These include the presence of tics or other motor issues, seizures if present, and attention-deficit hyperactivity disorder (ADHD) symptoms. Motor issues, including fine motor deficits, and sensory sensitivities (sensitivity to light, sound, or touch) can occur.