Neurodiverse Relationships is out now, and you can read an exclusive extract here on the JKP blog. This is the first book of its kind to provide perspectives from both sides of a relationship in which one partner is autistic and one is neurotypical.

In this extract, we’ll read David’s story, on the topic of change. Later, we’ll release Karen’s story. We hope these extracts, told in the couple’s own words, give you a good idea of the content of the book and how it may offer insight and understanding to some couples. Each chapter also concludes with insights and advice from Professor Tony Attwood. 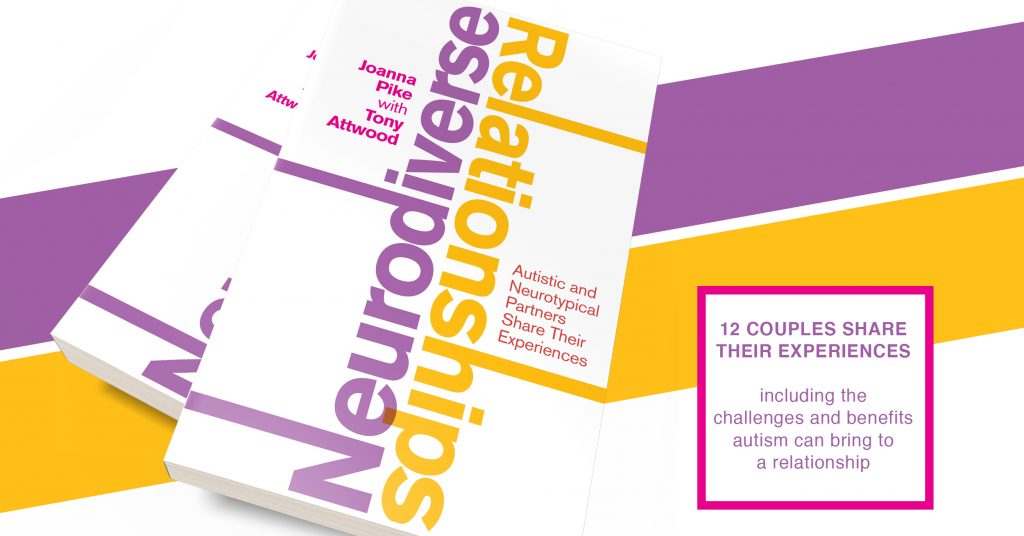 An AS Perspective: David’s Story

Change has implications on two levels. Superficially, for the Aspie trying to remain hidden in plain sight by putting on an act of perceived normality, change is the enemy of good planning. We spend a significant proportion of our energies trying to organize things so that we can sail through life unimpeded by having to make split-second decisions based on the emotional states of others. We do this by planning out nearly all of the courses of action that could be taken across a whole range of circumstances so that we are ready for anything any neurotypical might throw at us. Except, of course, change itself. I find that neurotypicals love change: change the wallpaper, get a new car, move the furniture. This can infuriate us Aspies. We have just got used to the old layout of the house, now you want us to have to memorize a new one. But I suppose that change and organizing things the way that you want them is inevitable – it’s a fundamental law of physics – disorder always increases, or something like that.

However, it’s the second type of change – a slow creeping change in the status of a relationship – that concerns me. I believe that, like lots of Aspies, I set out to find, woo and secure a partner. This formed part of my bigger plan to hide in plain sight by appearing somehow normal to the world. My peer group all had long track records of seeking boyfriends and girlfriends and eventually pairing off, and I had to do the same. I’m not sure if I was lucky or unlucky; I found Karen very quickly after starting the search in earnest. No ill-fated fumbles at university, just rescuing other people’s drunken girlfriends from cubicles they had locked themselves into and fallen asleep. One incident of mumbling ‘Do you want to go for a drink after work?’ to a girl miles out of my league, with a thankfully short but gentle let-down. One no-show to an answer to a small ad that pre-dated internet dating. And then I met Karen at work, and we just sort of clicked. Workmates cajoled me to take her out. I worked hard to woo; to act as ‘neurotypically’ as I felt able. I guess that probably came across as a mix of nervousness and chivalry, possibly even generosity. We married – the best party either of us had ever planned or attended – surrounded by friends; naysayers weren’t invited! 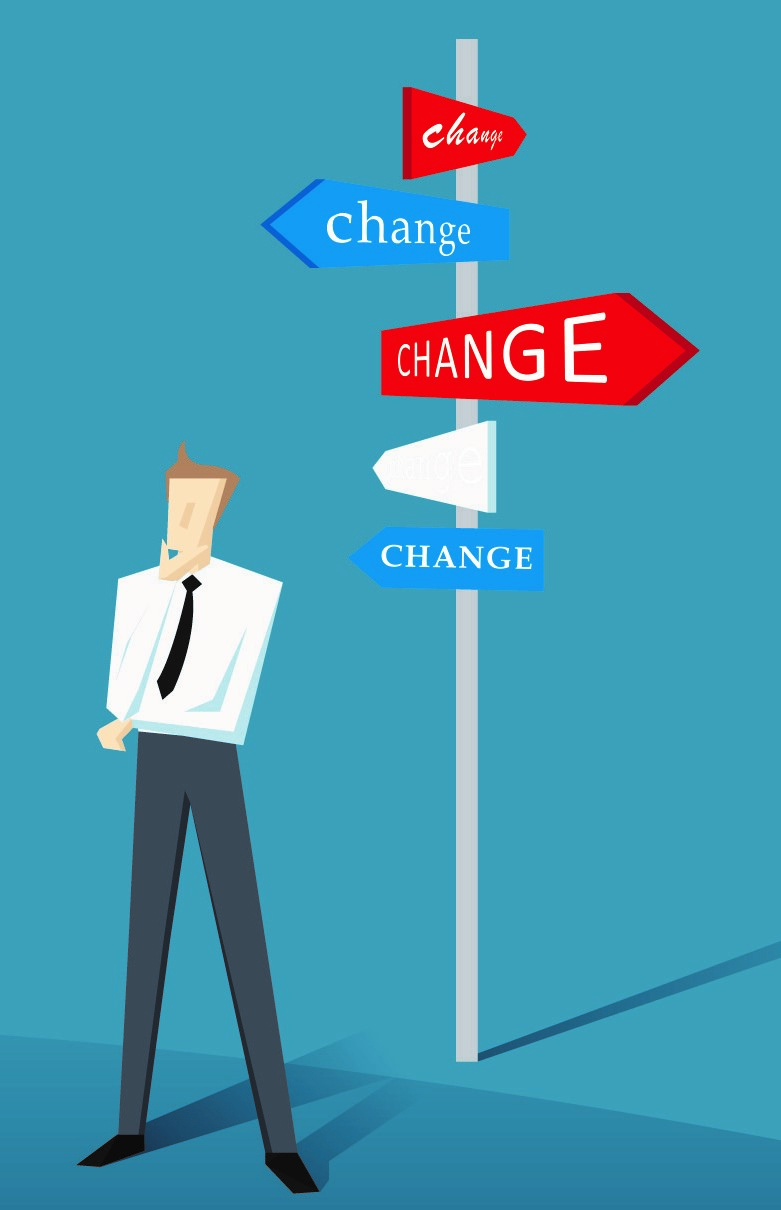 But then change kicked in. I think I would have been comfortable to maintain the status quo almost indefinitely, but Karen, as a neurotypical, wanted change – and frequently. And, I discovered, relationship change is much more complicated than furniture-layout change. Karen didn’t know I was an Aspie and neither, really, did I. At primary school I had been seen by an educational psychologist, but this pre-dated the drive in the UK for Asperger’s diagnoses and my behaviour had been poles apart from ‘classic’ autism. The matter slid; I moved on into adulthood undiagnosed, oblivious.

We soon bought a pet, but things didn’t work out the way that Karen had expected. She thought I would enjoy Dylan the dog’s company as much as she did, but here was relationship change – I was competing for Karen’s affection with a cute Welsh Springer and I was losing out. Dylan’s affection was almost unconditional – just food and walks; mine came with a hefty bundle of strings attached. The dog’s tolerance only served to emphasize my demands.

I’m of working-class stock, pulled up by my own boot-straps to lower-middle with my university education and world-travelling engineering job. Karen was from an upper-middle background and wanted me to operate and socialize at that level. I think Karen started to realize I was different, odd, perhaps a bit broken when I failed to respond favourably to keeping up the correct act at social gatherings – both intimate and full-scale parties. I hated dressing up and talking about the weather with near strangers. My social cup has always filled up quickly.

Set against this change, I had a constant in my life: my obsession or special interest was my work, my job, my career. I think Karen might have resented how much I threw into my job. Karen was probably disappointed that having been herself a ‘special project’ (a shorter-term obsession) she was now vying to be my current obsession with something in my life that was almost as important as her.

I’d tried to get the vicar to miss out the bit about having children, but he slipped it back in between the draft and the delivery of the marriage vows. It seemed to be a biological
imperative and the right social thing to do, so along came more change with the entries into the world of our son and daughter. This change felt like a trap. I am hypersensitive to bodily fluids so it was no good me trying to change a nappy. I think that, with a touch of post-natal depression, came disappointment from Karen that I wasn’t joining in with the work of child-rearing. Instead I looked forward to the days when I would be able to help my kids with their homework.

And here I come to my central thrust on the question of change in a relationship. How do you measure relationship ‘success’ in the face of change? Indeed, what is the neurotypical definition of ‘success’ in a marriage? Is it somehow ‘lasting’ to the 25th anniversary when the kids have left home and the parents are still together? Or is it that the couple should be as loving, amorous and sexually active as when they were courting? Could a successful outcome become two people enjoying life but somewhat more separately than they were at the beginning of their relationship; just good friends? Or something in between all of the above? Just how do you benchmark the quality of a relationship?

Was the time around our son’s diagnosis with Asperger’s the lowest ebb of our relationship? Very probably. Karen instigated a very big change that was ultimately beneficial in starting to study to become much more educated about Asperger’s. Along the way she unofficially diagnosed me with those apples of my son and daughter not falling far from the paternal tree. There were also some signs amongst her family. The big changes – formalizing my coping strategies as being those of an Aspie, studying them and starting to document our relationship for her Master’s thesis. Perhaps we are part way through tearing our relationship down and rebuilding it stronger with a mutual understanding.

Both Karen and I have been taking more of an interest in how other couples’ relationships pan out; especially when one or other of the couple is an Aspie. There does seem to be an awful lot of relationship failure, often catalysed by changes, and very small changes at that.

But back to my central concern on relationship change. I believe, admittedly on scant evidence, that lots of wholly neurotypical-to-neurotypical relationships fail when faced with change, but also many fail through a lack of change and progression. Where is that happy medium? What hope for the Aspie marriage where one party is allergic to change? Is there some comfort down the route of marriage guidance counselling? Seemingly not in the UK where, through a lack of specialist counsellors that understand both conventional relationships and the contrasting thought patterns and behaviours of Aspies, conventional wisdom might be that the couple should never have had a relationship in the first place and perhaps it might be better if it broke down amicably. And there’s another obstacle to conventional marriage counselling – I’ve carefully constructed the persona that I believe my neurotypical cohort of friends and Karen want to see and I don’t want some relationship counsellor to go probing amongst its foundations undermining it, decomposing it to demonstrate a lie.

So I want to undertake the right amount of relationship change, some would call it relationship growth, but I need to measure my progress. Karen had a few relationships before meeting up with me and, as a result, has something to measure me against. I didn’t have any failed or successful relationships before Karen, so I don’t have the benefit of a benchmark. And I don’t think a multiple choice pop-quiz in Cosmopolitan – ‘How strong is your relationship?’ – is quite going to suffice. I need proper cutting-edge social science.