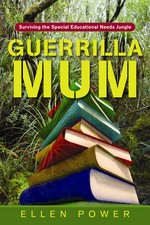 This is the first installment of a week-long interview with Ellen Power, mum to two children with Special Educational needs and author of the new how-to book Guerrilla Mum: Surviving the Special Educational Needs Jungle (August 2010, Jessica Kingsley Publishers), which describes how she worked with – and in some cases challenged – the authorities to get the right education for her children.

It took ten years for Peter to be fully diagnosed with his difficulties – amongst these, orthopaedic issues and low muscle tone, Asperger’s Syndrome, ADHD and dyspraxia. It took over four years for William to receive his diagnosis of severe verbal dyspraxia and motor dyspraxia. During this time we as parents suspected some of these diagnoses. As we observed our children fail repeatedly, both academically and socially we sought help from their schools and doctors. Their apathy and lack of urgency was frightening! Although Peter received a limited amount of therapy from physiotherapists and occupational therapists, due to his physical challenges, these interventions had minimal effect on his schooling. We were told that our boys were ‘quirky’, and that we should ‘wait and see’, how they developed, that they might grow out of their difficulties. We were actively discouraged from seeking a diagnosis. Even though it was acknowledged that William had a speech problem, there was no interest in him having his difficulty accurately diagnosed.

During this time we repeatedly asked the school to help our children. We did not know what to ask for. We found the teachers and the Head intimidating. By the age of six Peter was still unable to read a word, was stuck at the back of the class on a table with other children who also could not read, some of whom were disruptive and none of whom could see the blackboard! During this time I was upset whenever I thought about my children in school. Although I could hardly believe it, it began to dawn on me that although I wanted my children to have more help at school, the school did not want to do anything ‘extra’ for them and I could not understand why.

The light went on for me when I met another parent with a child who had special educational needs. She had been successful in having his needs met, and she had been very involved in this process. She told me that my feelings and experiences were certainly not unusual, and that it sounded to her that my children needed a statement. I had not really heard very much about this before. She gave me some information about parent support groups and when I contacted them, I found a wealth of information both about special needs and the law. Until then I did not know that what my children were experiencing was due to their special educational needs, and I did not know that there was specific legislation to enable children with special needs to get the help they needed to succeed at school. I realised that I was going to have to use the law to get what my children needed. Talking to other parents of children with special educational needs, and hearing about their experiences in dealing with schools gave me the confidence I needed to fight for my children.

I started to write about my experiences to help deal with the stresses of being a parent of children with SEN. At first I simply produced a series of ‘rants’ about my experiences and let off steam. The pieces of writing were not actually for anyone else, and I did not think of publishing them. A friend said to me ‘you should write a book’. I laughed this off, but every now and then, she would mention it again. Eventually, I looked online to see how one might go about writing a book, and sent a book synopsis – a book plan – to some publishers to see if there was any interest. My need to rant had gone away as I experienced success in getting help for my children, and seeing their needs met. However, I have never forgotten how I felt ten years ago when my first child started school, immediately began to fail, and I did not know how to help him. I decided that it would be much better to write a book for other parents explaining how one might go about having their child’s special needs met at school. I had some help from a commissioning editor at JKP (and also from my long-suffering husband!), and I came up with the plan for this book. It has been written as a handbook, and is interwoven with some of our experiences. I do not profess to be an expert in SEN Law or guidance, but have gained a lot of experience in dealing with the authorities when getting help for my children’s SEN. I don’t have all the answers, but have provided contact details for helpful organisations that parents can approach in their own quest to have their children’s SEN met at school. The book is not a story of my family’s SEN experience. I have tried to create a resource that can be dipped into as needed.

Tomorrow: Ellen’s advice about picking your battles in the fight to have your child’s Special Educational Needs met.

Ellen Power has a BA Honours Degree in French and History. After graduation she worked as a police officer then in commerce before having her first child in the mid 1990’s. Since then she and her husband have been tireless campaigners for their children’s rights to access the curriculum at school and to meet their potential in life. She has contributed to the National Austistic Society magazine ‘Communication’, discussing the issue of homeschooling children on the Autistic Spectrum. She lives with her husband and two young sons.